Many travelers dream of staying in top-of-the-line luxury hotels. But prohibitive prices often keep them away — especially now, as inflation drives up the cost of travel. For those who crave an upscale yet affordable getaway with an internationally branded hotel, however, there’s a place that should be on the radar: Panama.

Luxury hotels in Panama City can be booked at prices that are substantially lower than identically branded accommodations in other countries throughout the Americas. So if your goal is to stay in an international luxury hotel brand without straining your credit card, Panama City is a viable choice, thanks to its decidedly sophisticated — and definitely competitive — local hotel scene.

A quick survey of luxury hotel brands in Panama City reveals a variety of options that are often priced to beat similar offerings elsewhere in the Americas. Among the newest and most noteworthy examples is Hotel La Compañía, a gorgeous property that’s the first member of The Unbound Collection by Hyatt in Central America. Located in the historic and trendy Casco Antiguo district and set amid multiple historic buildings that have been beautifully updated, La Compañía sometimes offers rooms for less than $300 a night, compared to rates that run closer to $600 at the Chicago Athletic Association, the Unbound Collection’s property in the Windy City.

Travelers who enjoy the hip, stylish W vibe will also find a noteworthy — and attractively priced — option in this Central American metropolis: the W Panama sometimes offers rooms for as little as $188, compared to $290 and up at the W Los Angeles – West Beverly Hills. The W Panama offers unique activities like sunset yoga on the WET Deck and has a large spa with excellent treatment programs.

Even more affordable, surprisingly, is the Waldorf Astoria Panama, where it’s not uncommon for room rates to drop below $200 a night — a big contrast with the Waldorf Astoria Los Cabos Pedregal in Mexico, for example, where prices start at more than $1,000 a night. The handsomely designed Panama property exudes urban sophistication and features a spa, outdoor pool and multiple dining and drinking venues. 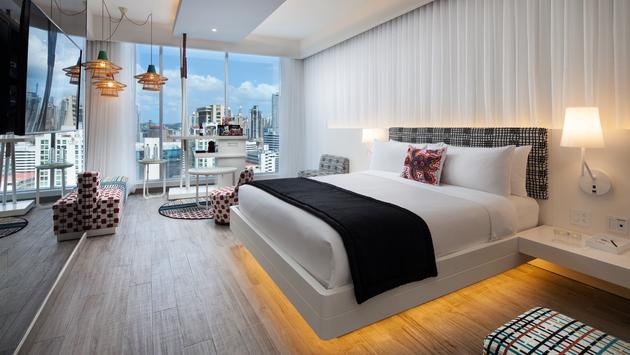 Panama’s sleek skyline is dotted with an ever-growing number of high-rise towers, and several of them house hotels with excellent views of the city and the Pacific Ocean. For waterfront views, it’s hard to beat properties like the Hilton Panama, which sits on the Cinta Costera’s waterfront boulevard and offers room rates that start at just over $200 a night.

Also set in an eye-catching high-rise is the JW Marriott Panama, which is located in a 70-story, sail-shaped building that happens to be the tallest building in Central America. Room rates at this sleekly luxurious property start as low as $160 a night; the JW Marriott Hotel Bogota in Colombia, meanwhile, more commonly charges about $300 for its least expensive accommodations. 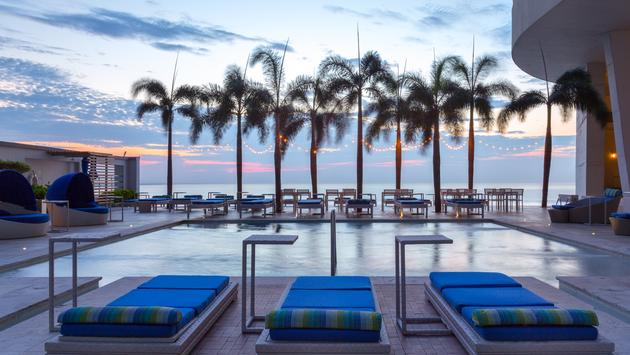 Westin is represented in Panama by two noteworthy hotels, both of which offer room rates that may run well below $200 a night: the Westin Playa Bonita Panama, a resort-style property just outside of Panama City, and the Westin Panama, located in Panama City’s upscale Costa del Este neighborhood. (A stay at the Westin Lima in Peru, meanwhile, will likely cost more than $200 a night, while the all-inclusive Westin Reserva Conchal, an All-Inclusive Golf Resort and Spa, can easily set you back close to $500 a night.)

Fans of the Small Luxury Hotels of the World consortium can also find an attractive option in Panama City. The American Trade Hotel, located in the Casco Antiguo district in a restored building that dates to 1917, offers room rates starting in the mid $200s.

Whether it’s a boutique style, high-rise chic or traditional elegance, Panama City offers plenty of opportunities to live it up without breaking the bank.