There’s no shortage of historic and luxurious hotels dotting the picturesque Irish countryside, but once you arrive at Ashford Castle, it quickly becomes clear that you’ve reached a very special place. The dreamy estate was originally built as a fortress in the 12th century, and over the past several hundred years, it has belonged to a number of prominent Irish families; most notably, it was a longtime country home of the Guinnesses.

The property was eventually transformed into a hotel, which opened in July 1939, and while it’s long been an opulent retreat, its latest multimillion-dollar revamp turned it into a truly noteworthy, bucket list-deserving destination. Ashford Castle became a part of Red Carnation Collection in 2013, and shortly thereafter underwent an impressive $75 million renovation. The hotel reopened its doors in 2015, revealing the results of the pricey refurbishment, including freshened up rooms, a lavish spa and a private movie theater (to name just a few updates), all while taking care to maintain the property’s historic nature.

The hotel has hosted quite a few famous faces over the years, too, welcoming everyone from Brad Pitt and Pierce Brosnan to Grace Kelly and Ronald Reagan. While luxurious accommodations and a ridiculously photogenic backdrop are admittedly important factors in determining the best hotels, Ashford Castle doesn’t stop there: the hotel is nothing short of magical, in no small part thanks to the attentive staff and respected history. Speaking of which, anyone who is lucky enough to stay at the hotel should make sure to ask Robert Bowe, Ashford’s restaurant and wine program manager, about a certain ghost story.

On that note, here’s everything to know about Ashford Castle and why it should top your travel bucket list.

If I keep mentioning the renovation, it’s because it really was done that well. Ashford Castle’s decor and furnishings manage to incorporate modern touches while paying careful attention to historic details, because let’s be honest here, when you’re spending a large amount of money (rates start at $776 a night), you want comfort, and contemporary additions are necessary for that! The interiors are sumptuous yet inviting, with oak paneling, velvet drapery and cozy fireplaces with ornate mantles. Each space in the hotel has a distinct, individual flair, but perfectly complements the rest of the enclaves, from the elegant sparkle of the George V restaurant to the subtle sophistication of the drawing room. 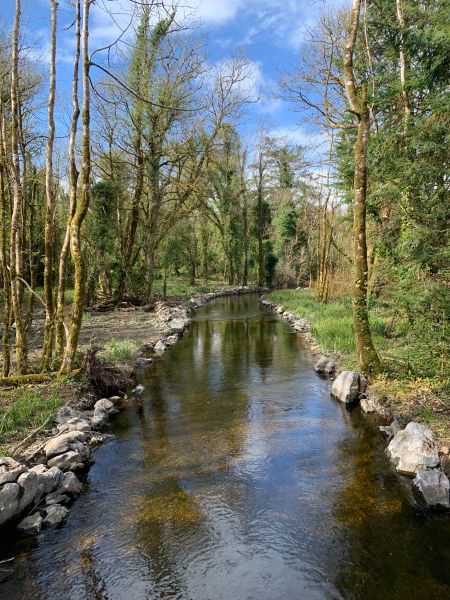 What’s there to do?

Ashford Castle occupies 350 acres in County Mayo, on the West Coast of Ireland. You could easily spend your entire trip within the confines of the estate; there’s a nine-hole golf course, a clay shooting range, fly fishing, archery and horse stables. Ashford Castle is also where you’ll find the oldest established falconry school in all of Ireland, where you can join a private hawk walk and hike along the grounds with an instructor—you’ll get the hang of it in no time. For a less strenuous but truly lovely activity, head out on one of the morning Wolfhound Walks, where you’ll explore the estate with the hotel’s beloved wolfhounds. For a less outdoorsy moment, stop by the newly finished cinema, which has different movie screenings each week. 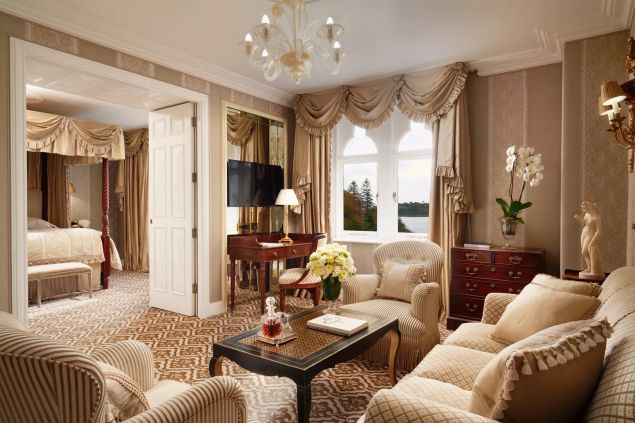 What about the rooms?

The historic castle is composed of just 83 rooms and suites, all of which are uniquely (and lavishly) furnished with plush drapery, textured wallpaper, custom patterned carpets and quite possibly the softest sheets I’ve ever had the luxury of sleeping in. The suites have separate living rooms, and some of the largest accommodations also have private dining spaces. While all of the rooms have lovely views of the grounds, I was particularly thrilled that my suite had the dreamiest vista of the lake outside, which I could take in from the comfort of a Sleeping Beauty-worthy, four-poster bed. 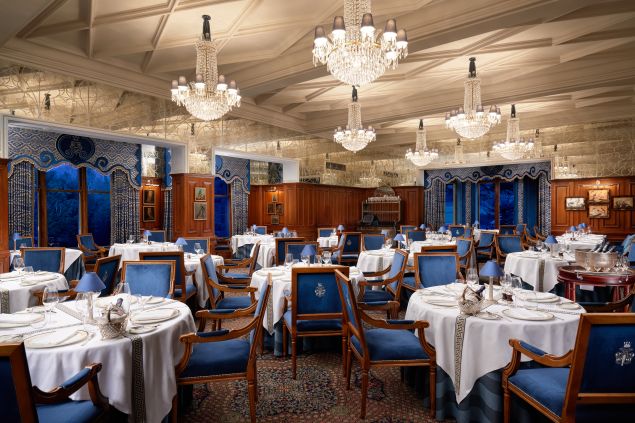 Ashford Castle is home to no less than seven (yes, seven) restaurants, some of which are found within the main castle, and others which are located further out on the grounds. Anyone who has checked into a somewhat isolated hotel, only to find that there’s one restaurant with the same menu for pretty much every single meal, knows what a treat it is to have a true abundance of choice when it comes to dining options. While I do recommend heading outside of Ashford to one of the neighboring local eateries, there’s no denying that you’d be perfectly content (and not at all bored) if you stuck to the plethora of restaurants within the estate.

The crème de la crème, however, is surely the George V Dining Room, which was originally built in 1905 in honor of the Prince of Wales, following the future king’s visit to the Irish estate. While there have been quite a few refurbishments over the years, the room is still decidedly fit for royalty, complete with wood paneling, many a sparkling chandelier, gold accents and plush blue velvet chairs. It’s definitely the most formal of all the dining options, and if you really want to treat yourself, consider indulging in the tasting menu, which comes with beautifully paired wines courtesy of a very impressive sommelier. 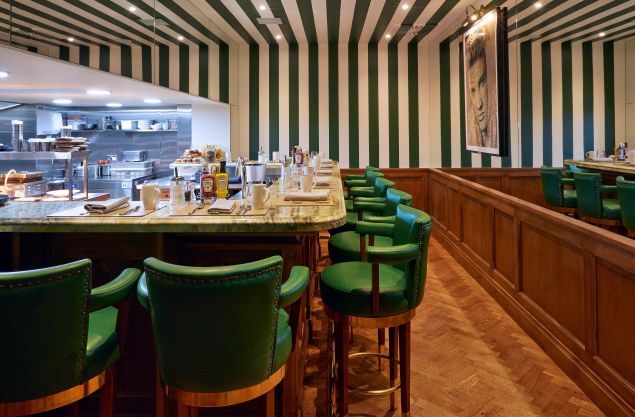 For a cozier or more casual experience, try Stanley’s, which is located on the lower level of the property, or Cullen’s at the Cottage, which is a separate building a brief way from the main lobby. And, of course, a cocktail or two in the Prince of Wales bar is nonnegotiable; you can relax in the sumptuously upholstered leather chairs and couches while sipping on a custom drink creation. On that note, a wine tasting in the cellar (which you access via many a hidden door and low-ceilinged hallway) is the perfect ending (or beginning) to a night. 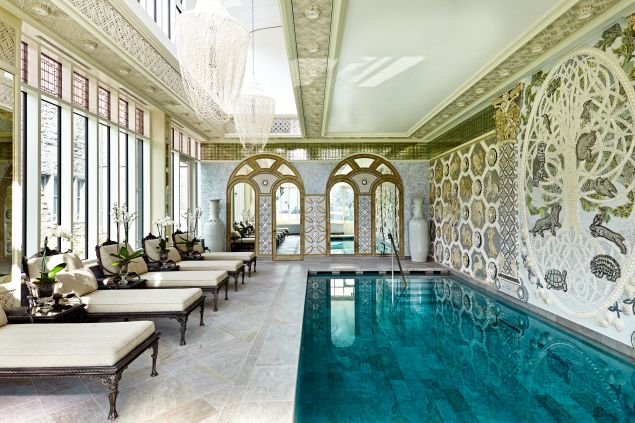 A spa moment is crucial.

Stepping into the spa at Ashford Castle feels like a complete escape, in so small part because of the contrast in the decor. While the majority of Ashford is adorned with classic furnishings, jewel tones, deep colorways and all the fitting antiques you’d expect of a luxuriously renovated 800-year-old Irish castle, the spa is decidedly light, airy and modern. The spa, which was created in the last phase of the multimillion-dollar renovation, is composed of five treatment rooms, a traditional hammam and a soothing stone steam room. No detail is too small; there’s even eucalyptus infused into the steam room to help with breathing and circulation.

It’s the relaxation pool, however, that really makes the spa stand out from the rest. It’s a serene space that is not only calming and tranquil, with a charming seashell chandelier and mirrored doors, but also embraces the historic estate’s history, with a “Tree of Life” mural symbolizing Irish Celtic mythology all along the wall extending the length of the pool. 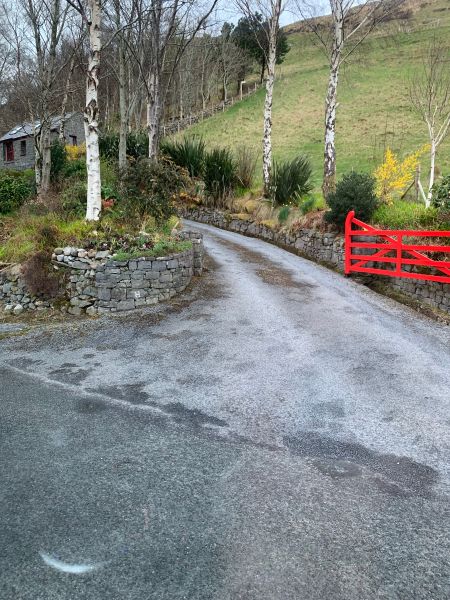 Yes, you should leave the hotel—at least for a few hours.

Now that you know all about what Ashford has to offer without ever leaving the property, you might wonder why you’d ever want to leave the estate during your stay, which, to be fair, is definitely a thought that crossed my mind. The stunning surrounding landscape and culture, however, is far too wonderful to pass up if you’re in the area. Ashford Castle recently launched a “Meet the Makers” program with carefully curated itineraries that are customized for individual guest experiences, so you can truly immerse yourself in the local culture of the community. Ashford has 37 different experience partners so far, which focus on everything from food and drink to crafts and dance, including workshops, tastings and more, many of which are held in local artisans’ own homes or workplaces. The partnerships just makes sense, and shows the respect Ashford Castle has for their neighbors and the local community. It’ll take your Ireland experience to a whole other level, and proved to be the perfect addition to an already dreamy stay.

*The stay at Ashford Castle was courtesy of the hotel. The views and opinions expressed are the journalist’s own.* 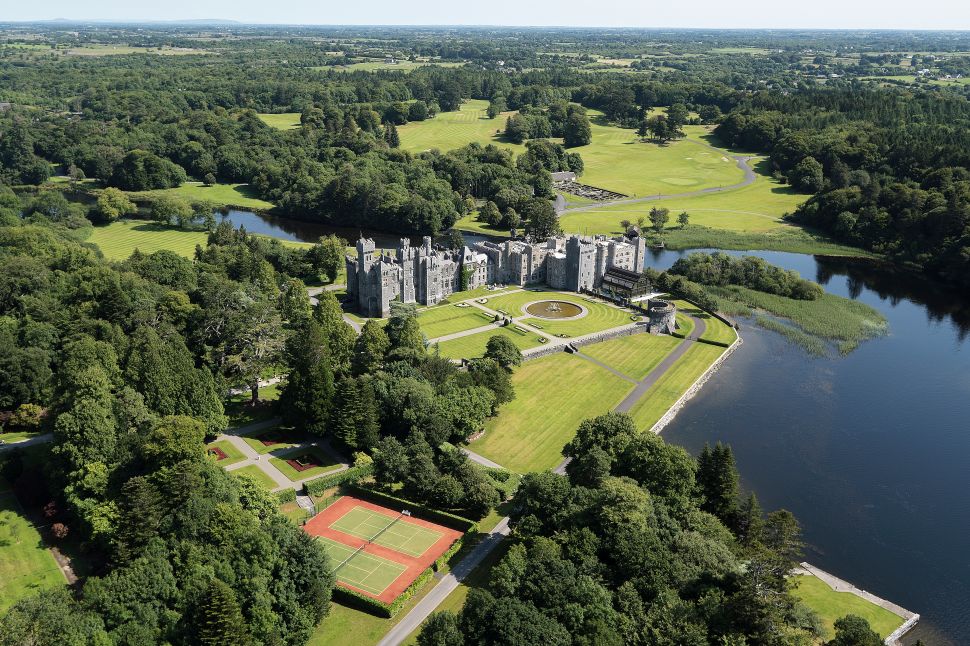