SOUTHEASTERN N.C. — The area’s food and beverage industry is expanding and growing by the minute — so much so, it ranked Wilmington in the top 10 small-town foodie cities nationwide by Yelpers just a few weeks ago. As such, restaurants, distilleries and breweries are making an impact on the culinary scene, perhaps only to be outnumbered by mobile eateries popping up across the area.

Four new trucks recently have rolled out operations. Port City Daily reached out to get the lowdown on each.

Kory Sanderlin found his passion for community service when he volunteered  to provide food and water via his first food truck after Hurricane Florence hit Wilmington in 2018.

“It had been a long time since I felt good in a kitchen, and it relit a fire in me,” Sanderlin said.

From it, Bare Necessities of NC, a nonprofit that provides community needs during natural disasters and difficult times, was born. Sanderlin moved his operation from food truck to food hut then to his first full-scale restaurant, M&K’s Kitchen, which closed in Leland earlier in the year.

Money raised allows them to do larger meals free of charge for those in need one to two days a week. The next free event will be aiding the Northside Food Co-op on July 28 for their weekly free meals, and the group is planning a fish fry in Leland this August as a fundraiser for both Bare Necessities and the Hope Learning Center.

“The food truck is a great platform to meet, see and greet members of the community,” Sanderlin said. “I can see where in communities people are suffering for food.”

The food truck also operates stops at 10 locations weekly, serving the public both lunch and dinner. Mostly, they have parked in Leland locations, such as the Advance Auto Parts off Village Road.

“We are working to break all gaps between the food disparity and people who have the means to fix the problem,” he said.

The desire to give back is inherent in Sanderlin, who said his stepfather encouraged him to “put community first,” something he learned firsthand in his youth. Sanderlin’s family responded to tornadoes that hit Riegelwood in 2006 by keeping a smoker running for days to make sure affected neighbors didn’t go hungry.

“At 12 years old, that feeling of helping the community felt great,” he said.

While soul food is Sanderlin’s specialty, he has been churning out smash burgers and hot dogs most recently. The Smash-N-Dash menu consists of seven burgers and bacon-wrapped hot dogs, as well as OTG nachos (a take on Frito Pie).

Sanderlin said the goal is to get back to his Southern roots soon enough, but starting with a small menu is beneficial to keeping  food costs low and prep simpler.

The Smash-N-Dash food truck can be followed here. 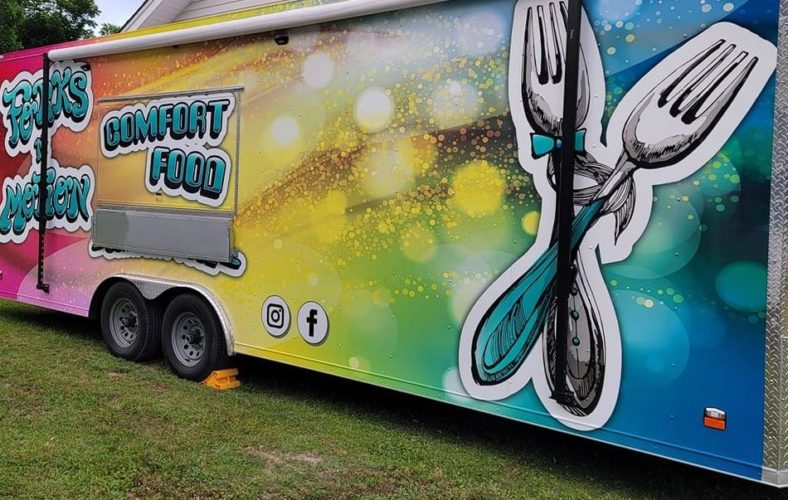 Satin Miller’s food truck launched last month and can be found across the region. (Courtesy photo)

The Leland Fire Department is used to taste-testing Satin Miller’s homemade recipes on a regular basis. A full-time fireman, she is the hands behind every holiday meal, cooking for others during natural disasters, and serving up lunch daily at Fire Station Number 52.

“I feed them every day I work,” she said of her fellow firemen, technically her first diners for Forks ‘N’ Motion, Miller’s debut food truck.

Having wanted to own a restaurant for years, Miller purchased the 24-by-36-foot food trailer and launched it last month.

“With the economy the way it is and the constant changes, a brick-and-mortar just didn’t seem like a good financial choice,” she said.

No stranger to the restaurant industry, Miller studied culinary arts in high school and grew up in a family that owned and operated three restaurants: The Station and The Longhorn in Nebraska, as well as Topsail Island Foods, a grocery service that offered homemade and premade dishes for customers to pick up and cook at home. It closed in 2012.

A food truck allows more freedom when not confined to a brick-and-mortar, Miller said.

“If a customer base leaves, I can pick up and go — I can change my scenery and go to the beach if I want to,” she said. “If my family wants to vacation in Nebraska to visit old family and friends, we can go there for a month and still work while on vacation.”

Miller’s menu consists of around six items priced $4 to $18. She offers mac and cheese that she modifies and updates, such as a Buffalo version currently on special through the summer.

She also has “Fork It Fries” — hand-cut potatoes smothered with a variety of toppings.

“I take our fresh ground beef that I get every week from a local farmer and put about 3 ounces of it on the flat top with peppers, mushrooms, and onions and grill it up so it’s crunchy,” Miller said. She then drizzles over “Fork-it,” sauce, a homemade barbecue condiment, followed by cheddar cheese.

Providing fresh ingredients wherever possible makes all the difference in every bite, Miller added. It also gives her flexibility.

“I’m able to change the menu on a daily, weekly or monthly basis depending on what is in season,” she said.

She already is thinking ahead to when the weather begins to cool off, looking toward hearty, healthy menu options, like traditional meat-and-threes.

Supporting local farmers and small businesses is top priority, as is her desire to give back to the greater good.

Along with her food truck, Miller’s other goal is to start a nonprofit that employs newly paroled inmates seeking to get back into the workforce.

“The food truck limits the amount of people you work around so that they could get comfortable again,” Miller said.

Her goal is to invite parole officers on the truck and to install cameras so they can check on inmates as needed.

“My idea is for it to run as a nonprofit so that they can give back to the community and serve any community service hours needed while also being employed,” Miller said.

She also is currently working to obtain FEMA permits so the truck can operate during states of emergency.

“To feed all first responders and crews coming in so that I can better help the community,” Miller said. 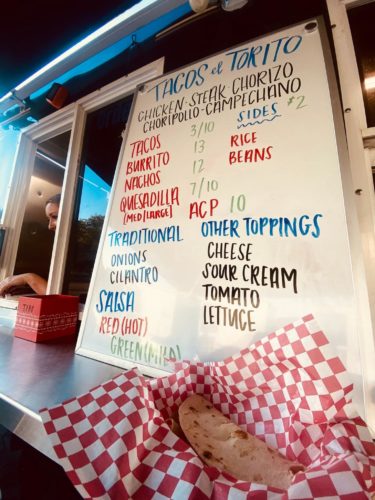 Several years ago as a teenager, Pender County native R. Perezwas assisting his family’s restaurant, El Clasico Mexican Grille in Burgaw. Perez did everything from waiting tables and washing dishes to cooking in the kitchen.

“The experience of a fast-paced environment made me appreciate the hard work involved in the catering business,” he said.

Perez served at several locations with the El Clasico Mexican Grille’s food trailer, and recalls serving migrant workers in the blueberry fields outside of Wilmington.

“The work was hard but extremely satisfying,” he said, “an amazing experience.”

“She has always helped us and allowed us the opportunity to serve our area together,” he said.

Perez graduated from Pfeiffer University in 2011 as an English major and also works for the City of Wilmington. He purchased a food truck earlier in the year and launched Tacos El Torito in May 2022.

The menu focuses on simplistic Mexican food — build-your-own tacos, nachos, quesadillas, and burritos. Diners choose their proteins (steak, chicken, chorizo) or any combination at no extra cost, toppings (lettuce, cheese, cilantro, sour cream, tomato, onions), red or green salsa, and can add a side item, Mexican rice or pintos. Prices are $7 to $13.

“This has been very popular,” Perez said, “in addition to our ACP (arroz con pollo).”

Perez keeps preparation simple by grilling meat using basic salt and pepper so the food speaks for itself.

He credits his passion for cooking to his mother, sisters, and significant other for helping him through this journey.

“They have inspired me not to be afraid but instead to grab the bull by the horns,” he said.

Tacos El Torito Food Truck operates on Saturdays and Sundays. Its schedule can be followed here.

After living in Wilmington for over two decades, Ashad Abdel, one of the owners of Shawarma Express — who also operates the Seafood and Halal Meat Market on Carolina Beach Road — wanted a chance to showcase his family’s generations of Middle Eastern recipes.

Armed with his grandmother’s recipes originating from Palestine, he and friend Abdelhadi Sarameh have launched a new food truck, Shawarma Express, parked daily in front of the market.

A lack of authentic Middle Eastern cuisine compelled the two to start their first food truck. Yet, neither are newcomers to the food and beverage industry; they have worked in Middle Eastern restaurants and as entrepreneurs of various businesses throughout the years.

One of the food truck’s signature dishes, according to Abdel, is the “Shawarma Sandwich Wrap,” served with chicken or beef.

“We marinate the meat in our secret Middle Eastern spices,” Abdel said.

The chicken shawarma is smothered in homemade garlic sauce, while the beef version comes served with a classic homemade tahini.

Vegetarian alternatives are also offered on the truck, particularly in the homemade falafel.

“We start with ground chickpeas, Fava beans, parsley and blend it together with our special blend of spices and fry it to perfection,” Abdel said.

The eatery also offer shish kabobs, shish tawook, and kufta, as well as plates and sides, including homemade hummus and tabouli. Prices are $4.99 to $17.99.

Shawarma Express sets up in the parking lot of the Halal Meat Market Monday through Saturday, noon to 8 p.m. It is closed Sundays and offers delivery through third-party apps, such as DoorDash, GrubHub, and Uber Eats.

The Shawarma Express can be followed here.

Have tips or comments? Email info@portcitydaily.com

Want to read more from PCD? Subscribe now and then sign up for our morning newsletter, Wilmington Wire, and get the headlines delivered to your inbox every morning.