Motorists head out for the holiday weekend on May 28 in Chicago, Illinois. Photo: AFP

Regina King, working with information technology in Washington DC, is finally taking a vacation after one year of staying close to home on the outskirts of the US capital.

“I’ve waited a year,” she told Xinhua, noting her weekend shopping trip to New York City, where she enjoyed its ­metropolitan atmosphere that she had missed so much in the past year.

King, in her early 40s, was joined this past weekend by millions of Americans venturing out of their home areas – a boon to the economy, as over half of Americans have been vaccinated against COVID-19 and can safely resume their normal lives.

The American Automobile Organization predicted that over 37 million people would travel at least 50 miles from home during the holiday weekend – a sharp increase of 60 percent compared with the same weekend last year, during the height of the coronavirus lockdowns.

King said she spent far higher than normal on hotel costs – $250 a night – which was “not a problem,” since she had socked away more money than in any prior year, as the pandemic severely limited Americans’ ability to spend.

Jim Kessler, a consultant in Philadelphia in his 40s, flew to parts of Texas and northern California this holiday weekend, in a bid to enjoy the much warmer climate. This was the first time he, his wife and two children “had traveled anywhere” since the pandemic hit the US, he told Xinhua.

The rebound in tourism and travel is expected to have a positive impact on the economy, as people finally get out of their homes and spend on items such as airplane tickets, hotel stays, resorts and so forth, experts said.

Indeed, hotel bookings, airline travel and tourism are already “rebounding convincingly,” according to Wells Fargo, a major US bank, in a report released last Friday.

Overall, the US economy grew 6.4 percent in this year’s first quarter, amid rapid vaccine rollout and distribution of government stimulus checks that have sparked a rebound in consumer spending.

In March, economists at UBS bank raised the 2021 fourth-quarter growth estimate to a whopping 7.9 percent – a massive increase for a mature economy such as the US.

The bank said that while inflation will rise as the economy reopens, it will tamp down once the economy gets back to normal.

Desmond Lachman, resident fellow at the American Enterprise Institute, told Xinhua he expects that household consumer spending will “continue to pick up strongly in the months ahead,” since most Americans are now vaccinated and lockdown restrictions continue to be lifted.

Consumers are “benefiting from the largest peacetime budget stimulus on record,” Lachman said.

During the pandemic, Americans “increased their savings by around $2 trillion more than they otherwise would have done,” Lachman said, noting the savings Americans accrued from putting off vacations and other spending.

“Now that we are returning to normal, one must expect that this pent-up demand will be translated into actual spending in the economy.”

Some not ready to go

However, not all Americans are ready to hit the road. Some have become accustomed to staying home over the past year and are in no hurry to go anywhere.

Laura Cohen, in her 40s, in logistics management in the area around Washington DC, told Xinhua, “No traveling. We went shopping for stuff for the yard.”

She added that she has no plans to go on vacation out of the area over the coming summer.

Cheryl Chambers, an admin in the DC area in her 40s, told Xinhua she also spent the holiday shopping locally. She added, however, that she plans to take a vacation a few months down the road.

Fred Stein, in IT outside of New York City, has barely left his house over the past year. While he and his wife have been ­vaccinated, his 5-year-old daughter has not yet received the jab, and the couple is reluctant to take a vacation for fear of their daughter catching COVID-19. They remained at home during the holiday weekend, he told Xinhua.

A recent Harris poll found that adults who have received or plan to get the vaccination expressed a lower level of comfort with activities such as shopping without a mask or dining indoors than those who expressed skepticism over the vaccine.

The Wall Street Journal reported earlier last month, quoting Earnest Research, that foot traffic is making a comeback more rapidly in US states with lower rates of vaccination than in states in which 45 percent of the population has received the jab.

Experts said that could point to people’s risk tolerance. Those with a higher tolerance for risk may be more willing to venture outdoors whether they have received the vaccine or not. Those with a lower appetite for risk could still hesitate to resume all normal activities.

However, economists have warned of not drawing too many conclusions from data so early in the recovery.

“American households are not known for their thrift,” and could spend “a large amount of their excess savings” going forward, Lachman said. A man pushes his bags on the departures level at Los Angeles International Airport on May 27 as people travel for the Memorial Day weekend, which marks the unofficial start of the summer travel season. Photo: AFP 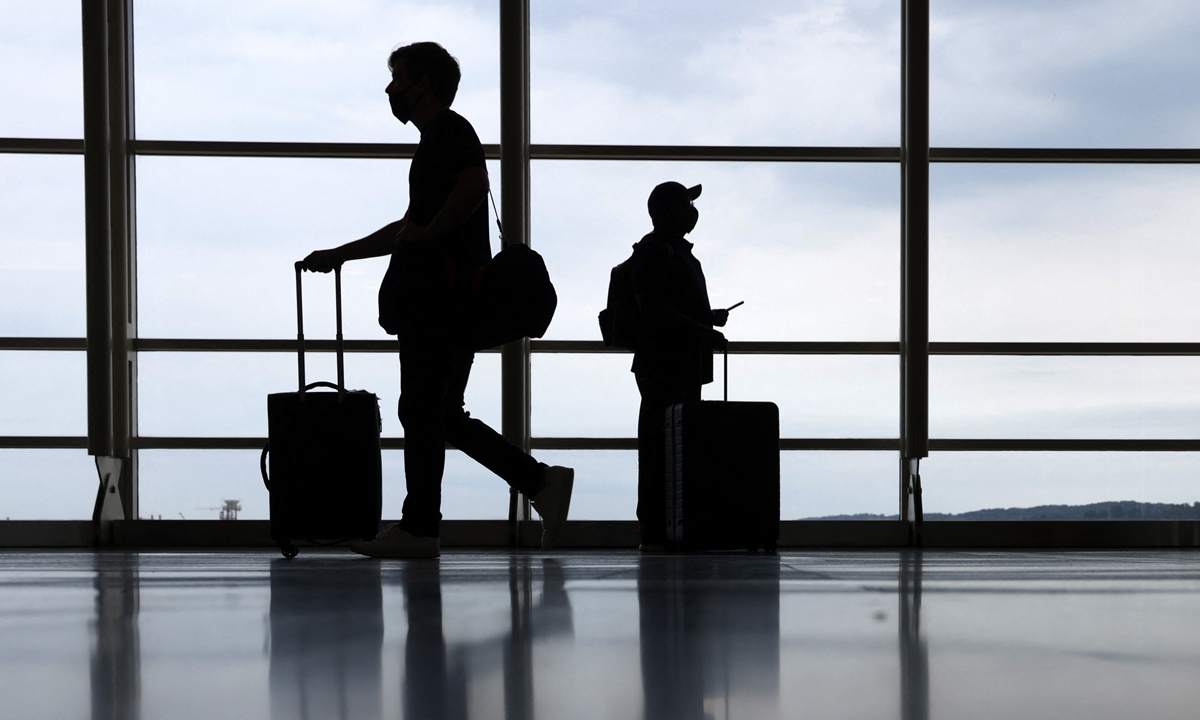 Travelers pass through the concourse at Ronald Reagan Washington National Airport on the eve of the Memorial Day weekend on May 28 in Arlington, Virginia. Photo: AFP