From sea to shining sea, the United States is filled with incredible cities. From the historic (like Boston and New Orleans) to seaside escapes (like, well, almost anywhere on California’s coast), there’s no shortage of interesting cities to check out in the world’s fourth-largest country: the United States of America.

Since the U.S. is so large and varies greatly from region to region, it’s hard to get a good sense of the country by just seeing parts of it. To that end, here are some of the best cities in the U.S. to start checking off your list. Once you make it to these 10 special destinations, you can continue the adventure by checking out The Best Tourist Attraction in Every State.

For any history buff, Boston is a must-visit city when traveling through the United States. Even a ride on Boston’s public transportation is a step into history, as the city had the first subway system in the country. The Freedom Trail, which brings visitors to many of the city’s most historic sights, is also an essential activity for anyone vacationing in Beantown.

“In Boston—one of America’s earliest great cities and now one of its finest—history and modernity are linked at the hip,” says Mathew Bowley, the marketing manager at Solmar Villas. “Make a point of seeing the Back Bay row homes, which are common Instagram fodder, but are truly a must-see.”

In addition to seeing some of the most historic architecture that the country has to offer, Bowley also recommends hitting up the city’s well-known seafood scene while visiting. “Boston loves its seafood, from chowder to lobster rolls, so make a point of visiting the city’s greatest raw bars and lobster shacks while you’re here.” 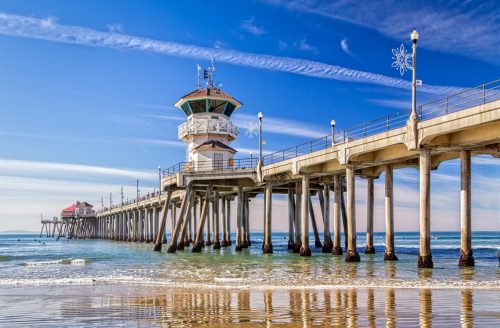 You can’t claim to have really seen the U.S. without having made a stop in California—and Huntington Beach, conveniently located between Los Angeles and San Diego, is one of the most exciting places to visit in the state.

“Home to the US Open of Surfing, the Pacific Air Show, and many other water-based events, Huntington Beach has earned its reputation as Surf City, USA,” says Elizabeth Borsting, an account manager at Development Counsellors International. “With a walkable downtown, miles of pristine beaches (including one just for dogs), oceanfront resorts, and the Bolsa Chica Wetlands teeming with wildlife and flora, Huntington Beach is a great home base for exploring Los Angeles, Orange, and San Diego Counties.”

While you’re there, make sure to stop at the International Surfing Museum after hitting the waves yourself. 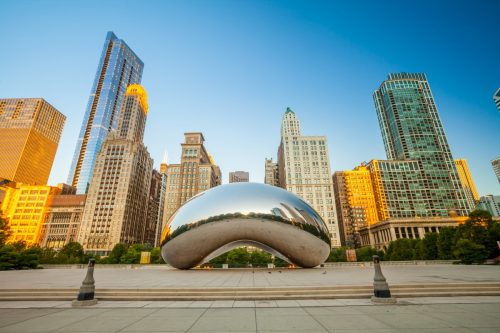 If you love architecture, live music, and especially food, then there are few better American destinations to visit than Chicago, the largest city in the Midwest. According to U.S. News & World Report, it’s also one of the best foodie destinations in the country.

“Chicago has a lot to offer, whether you want to tour a beautiful city while eating a slice of deep-dish pizza or sit down for some fantastic meals and see some of the best museums and arts,” says Jenny Ly, the founder of Go Wanderly. “Take a kayaking trip down the Chicago River, take pictures with the Bean at Millennium Park, or visit the Skydeck at Willis Tower for panoramic views.”

Other ideas? After gorging on Chicago-style hot dogs and Rainbow Cones, make time to go on an architecture tour of the city’s downtown and check out some of its top-tier museums, including The Art Institute of Chicago—one of the best places to check out impressionist masterworks.

READ THIS NEXT: Southwest Is Cutting Flights From These 3 Major Cities, Starting in June. 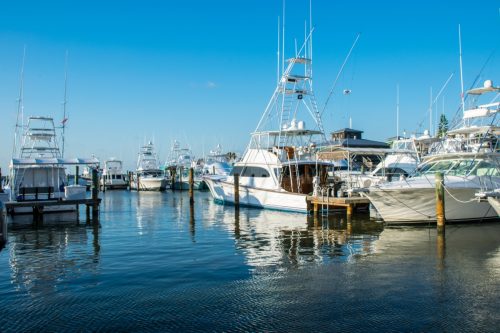 While some of America’s best cities to visit are large hubs with international airports, others are more under-the-radar and difficult to get to… like Port Aransas, Texas, located on an island near Corpus Christi. Voted as one of the best places to go in the Corpus Christi area, Port Aransas has approximately 18 miles of shoreline, numerous hiking trails, and is home to Texas SandFest, an increasingly popular sand sculpture festival.

“Located on the northern end of Mustang Island, one of the barrier islands of Texas on the Gulf of Mexico, Port Aransas is best reached by ferry or driving over the JFK Causeway Bridge onto North Padre Island,” says Tim White, the CEO and founder of MilePro. “While it does have an airport, flights aren’t particularly frequent and it’s essentially impossible to fly there from major American cities.” But trust, it will be worth the trek! 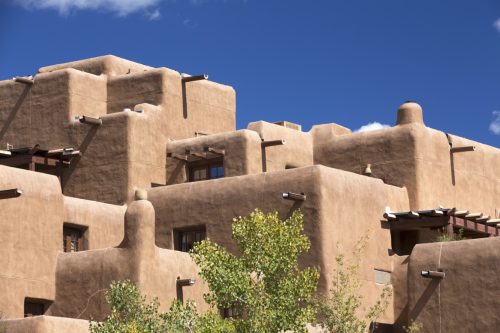 Whether you’re a big fan of Georgia O’Keeffe, green chiles, or simply being in the mountains, Santa Fe, New Mexico is an unbeatable and affordable destination for checking out the country’s southwest. Santa Fe has been ranked by the U.S. News & World Report as the best place to visit in the state of New Mexico, as well as one of the best cheap winter or fall vacations in the country.

“It’s a gorgeous city with a vibrant arts and culture scene and plenty of art galleries and shopping available for travelers,” says Ravi Parikh, the CEO of RoverPass.

While Santa Fe is by no means a large city, it’s in close proximity to both the Bandelier National Monument (which features human settlements from more than 11 thousand years ago), and the Santa Fe National Forest (if you’re looking for a place to really get into nature).

“Northern New Mexico is a gorgeous area as well, with plenty of high desert landscape surrounding Santa Fe to be explored,” adds Parikh.

READ THIS NEXT: 9 Secret Travel Hacks Flight Attendants Always Use. 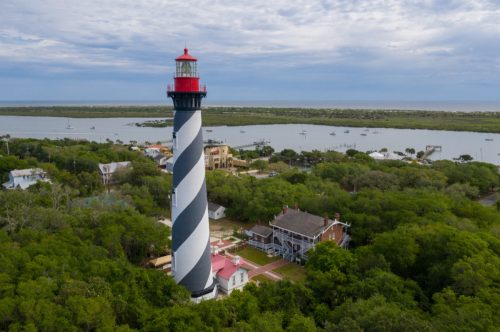 If you’re going to be seeing cities in America, it would be worth visiting the first one Europeans ever saw in the country—St. Augustine, Florida, the home of the first European settlement in the U.S. “St. Augustine is widely known for being the oldest city in the U.S., a claim hard to deny once you see the historic Spanish architecture and monuments of American history,” says Christie Hudson, a senior PR manager for Expedia North America.ae0fcc31ae342fd3a1346ebb1f342fcb

While it pales in size compared to some of Florida’s bigger cities like Orlando and Miami, it’s been ranked by U.S. News & World Report as one of the best destinations to visit within the state. Plus, it also offers up miles of beautiful coastline. 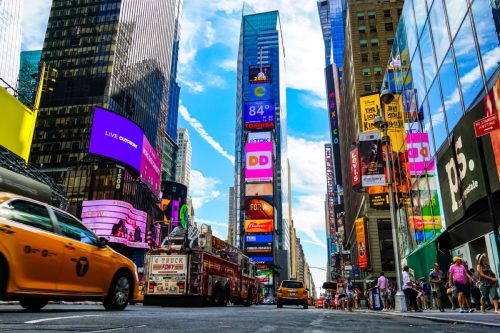 What list of American cities to visit would be complete without New York? The largest city in the country and the inspiration for countless movies, poems, TV shows, books, and songs, New York City is hands down one of the best places to visit in the country, according to rankings from U.S. News & World Report.

“New York has a certain kind of magic, and arguably more to see and do than any other U.S. city,” Hudson says. “Visit historic Ellis Island, see a Broadway show, walk the Highline, ride the subway, grab a slice, go to the top of the Empire State Building, or take in the 911 Memorial… the list goes on.”

While the city experiences all four seasons, getting very hot in the summer and very cold in the winter, it’s great to visit any time of year, and there’s a range of activities that can be done no matter what season it is. Hudson says that based on Expedia lodging data, fall through the holiday season is the most expensive time to visit—so plan accordingly.

READ THIS NEXT: 9 Must-Have Items You Should Always Bring to the Airport. 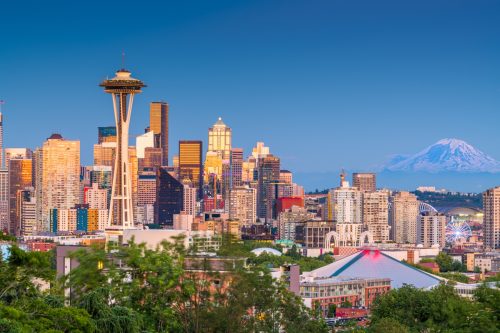 Known for being a draw for foodies (the city was ranked in the top 10 best foodie cities in the country and it is the birthplace of Starbucks, after all), Seattle received approximately 41 million visitors in 2019. That number makes sense when you consider all that the city has to offer.

“Seattle is the crown gem of the Pacific Northwest, with lush parks and boundless vistas of Puget Sound,” Bowley says. “From the top of the famed Space Needle—a 360-degree spinning atrium with a glass floor—you can see it all. Seattle is home to some of the best restaurants in the world, as well as world-class institutions such as the Seattle Art Museum and the Museum of Pop Culture.”

Bowley also says that the city is well-known for its contributions to music—especially through its thriving punk and grunge scenes in the ’90s. It was the home base for bands like Nirvana and Pearl Jam, and that legacy still lives on in its live music venues today.

“While the grunge period that made the city famous has passed, there are still lots of great music places to visit, such as Neumos and the Showbox,” Bowley says. 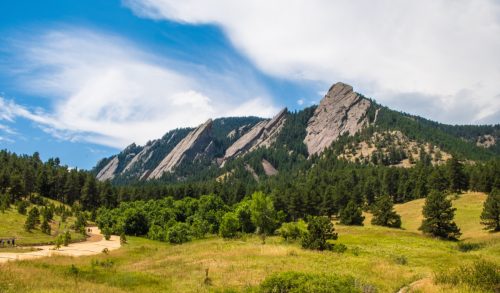 Located in the foothills of the Rocky Mountains and home to the University of Colorado, Boulder has regularly been ranked as one of the best places in the country. U.S. News & World Report has ranked the small city as not just the best place to live in Colorado, but the best place to live in the country. It’s also been ranked as the second-best city for quality of life, and one of the top 100 cities to retire. It’s safe to say that if Boulder is so great to live in, it must be pretty spectacular to visit… and might even inspire a future move for you.

“Boulder’s setting is spectacular,” says Dan Meyer, the founder and director of BACK&PACK. “The city limits the height of development, so you can typically see the iconic Flatirons regardless of where you are. It’s simply beautiful no matter what time of year you visit, but spring is especially wonderful. All of the tulips come up in town and give the city a very fresh and vibrant feel.” 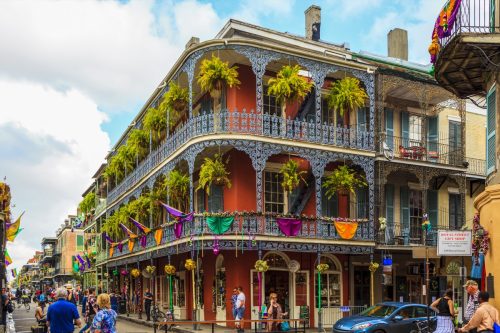 There are few better comeback stories than that of New Orleans, Louisiana. In 2005, the city was devastated by Hurricane Katrina, but now, the Big Easy consistently ranks as one of the best places to visit for a vacation. U.S. News & World Report ranked it not only as the best place to visit in February (when it’s gearing up for Mardi Gras), but also one of the best foodie destinations in the country. So, get ready to dig into some po’ boy sandwiches and beignets.

“They love to dress up and party in New Orleans, so throw on a wig and mask and go to the French Quarter and Marigny for some of the greatest cuisine in the city,” Bowley says. “Grab a to-go cup of handmade drinks from one of the city’s top bars and listen to some of New Orleans’ best live music.”

“Keep an eye out for the unique architecture that marks this one-of-a-million, music-loving city while you’re here,” Bowley adds. This includes its cemeteries, where the tombs are all above-ground.

For more great travel tips and advice, check out The 10 Best Places to Travel Internationally This Spring.