As part of the Seoul Metropolitan Government’s plan to secure the title of “gastronomic city,” it hosted the third edition of the food festival Taste of Seoul 2022. 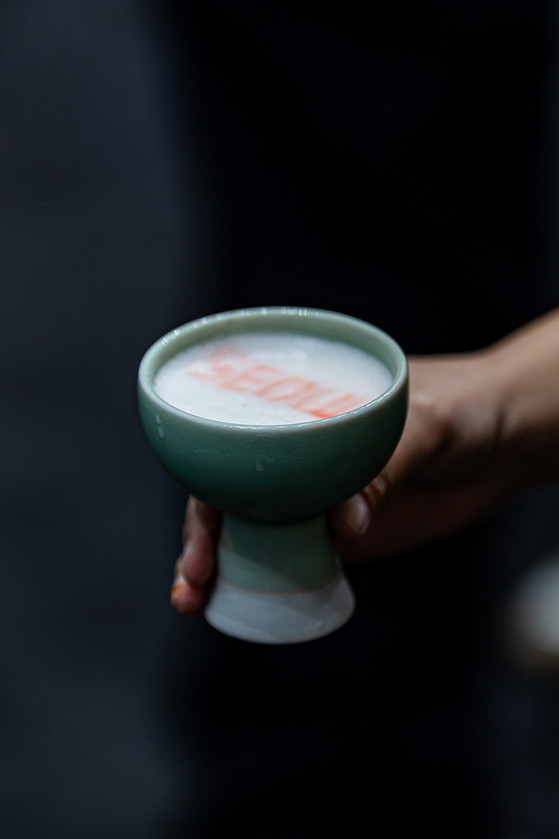 A cocktail made by bartenders from Le Chamber in southern Seoul’s Gangnam District served at the opening gala dinner of Taste of Seoul 2022. [TASTE OF SEOUL]

With more contemporary style Korean restaurants being awarded by global critics like The Michelin Guide and hit shows like Netflix’s “Squid Game” (2021) showing humbler fare like dalgona (melted sugar candy), the global community is more curious than ever about Seoul’s food culture.

Over the week-long festival, which ended Thursday, the city government aimed to showcase both premium and affordable Korean food to appeal to foodies with any budget. 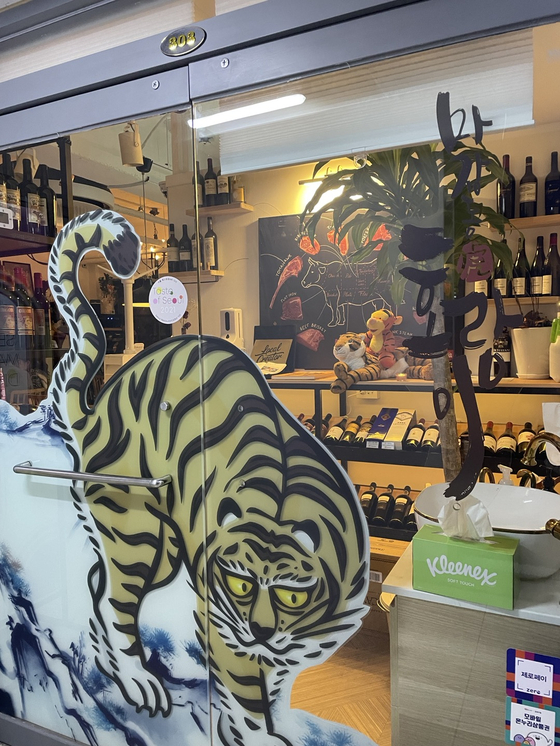 It is the first time for the city to host the festival offline. The previous two editions only released information about Seoul’s dining trends online due to the Covid-19 pandemic.

As part of the festival, the city government promoted restaurants hosting special events on social media to encourage diners to share their experience online in order to create a buzz about Seoul’s dining scene. It also selected 100 restaurants as recommendations.

In addition, the city government promoted traditional markets to offer unique dining options for those on a budget. Visitors can shop for fresh hanwoo beef at the traditional butcher’s market in Majang-dong, eastern Seoul, and then cook it at restaurant Majang Tiger inside the market. Cocktail bar Jangsaeng is located in the Yeongdong traditional market in southern Seoul, and offers drinks inspired by items sold at neighboring stores, such as ginseng and herbal medicines.

“We are still in the search of what identity Seoul should incorporate when it comes to Korean food and its overall gastronomic culture,” said Choi Kyeng-ju, director general of Seoul Metropolitan Government’s Tourism and Sports Bureau. “Putting together the Taste of Seoul allowed us to check where Seoul stands among the major food cities and learn how to make it even more appealing for those who travel for food.

“Given that almost 80 percent of travelers to Korea come to Seoul, the impression we make has a huge impact on their decision to come back to Korea and visit other cities outside Seoul to continue their food adventures, or even return to Seoul again.”

To offer culinary talents a chance to meet and mingle, Taste of Seoul hosted a gala dinner on its opening day on Sept. 30 with chefs from restaurants, cafes, and bars from the 100 recommended list. 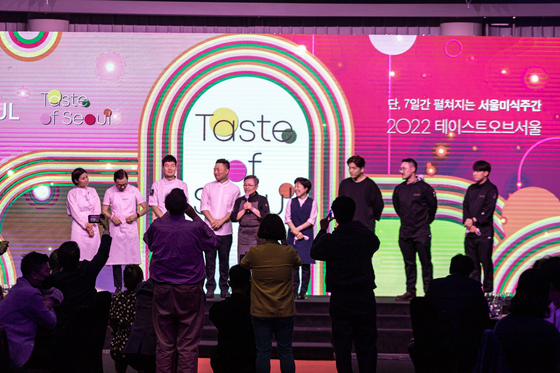 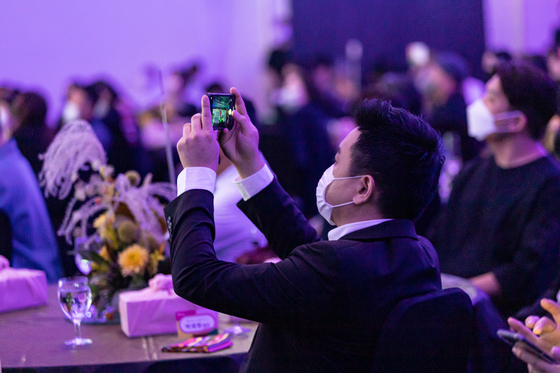 To signal the third edition of Taste of Seoul this year — and the first to take place offline — local chefs and culinary talents gather for a gala dinner on Sept. 30. Some of the eateries that are listed in the book “100 Taste of Seoul 2022” were honored on stage before the dinner began. [TASTE OF SEOUL]

As part of the festival, contemporary Korean food at two-Michelin-starred restaurant Mingles got a rare cocktail pairing with Korean liquor on Oct. 1 in collaboration with award-winning bartenders from Le Chamber, which was ranked No. 39 on Asia’s 50 Best Bar list announced in May.

While cocktail pairings with course menus is nothing new overseas, the concept is rarely seen in Korea, especially with traditional liquors.

Chef Kang Min-goo of Mingles felt the need for local restaurants to strengthen their drink programs, and suggested one of the most popular and renowned bars in Seoul to make it happen.

“We intentionally left some room in the drinks so that the flavors from the drinks and the food could complement each other in the areas where they lack,” said JJ Lim, co-owner of and a bartender at Le Chamber. 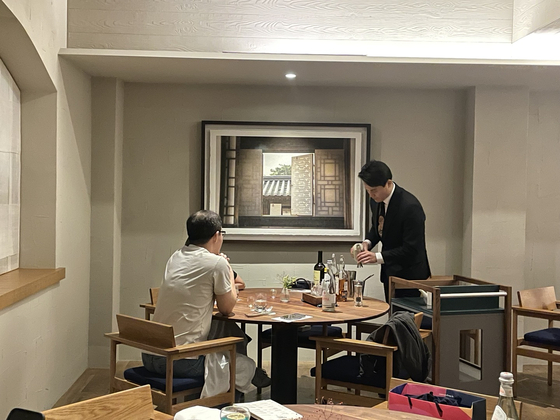 Co-owner bartender JJ Lim of Le Chamber makes cocktail right by a diner’s table at Mingles in southern Seoul’s Gangnam District, during a special collaboration between the restaurant and the bar to pair contemporary Korean food with drinks made with Korean liquor. [TASTE OF SEOUL]

To get diners involved, the bartenders mixed the drinks table side. Baekseju, a type of yakju (clear rice-based wine), was mixed with sherry to make a more approachable drink to pair with hanwoo steak and grilled abalone.

Instead of each creating separate dishes for the one-day event, the chefs collaborated on the offerings. 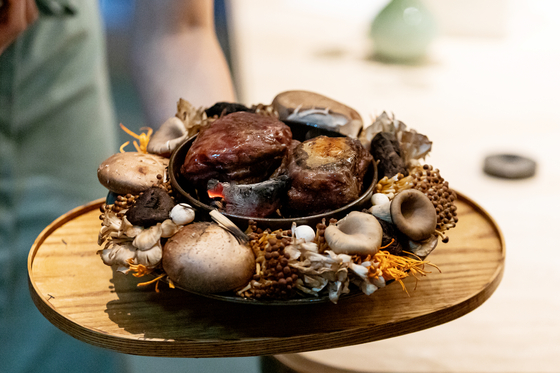 “One thing that I think a lot about when it comes to making hansik (Korean food) more global is what to take away or what to change without actually losing the very essence of what makes Korean food Korean,” said Cho, who used to run now-closed Hansikgonggan. “Through such collaborations, I can study more sauces or cooking techniques from other cuisines and figure out my own way to modernize Korean food in a way which diners may find more interesting or familiar.”

While the Korean chefs aimed to learn ways to make Korean cuisine more approachable, Japanese chef Narisawa wanted to complement his Japanese cooking. He is the most curious about how Koreans eat fermented food, for example kimchi, every day, while Japanese people don’t commonly consume vegetables that have been salted for a long time.

The Sool Gallery, a government-operated tasting room for traditional Korean alcohol established by the Ministry of Agriculture, Food and Rural Affairs, ran a makgeolli-making (Korean rice wine) program for Taste of Seoul. The program was in Korean but there may be an English version if demand is high.

The Sool Gallery currently offers tastings of five different drinks in English, every day except Mondays. Serene Teo from Singapore but currently living in Seoul took part in one such tasting along with her friends.

“[Teo] is always the one that takes us to places where we can try Korean alcohol,” said Caroline Lim and Jackie Liao, both from Singapore but also living in Korea. They were particularly fond of drinks made from bokbunja, a type of red berries. 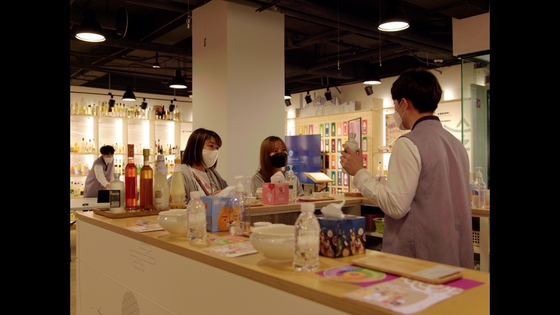 The trio said they use translation services to read content written in Korean when they are visiting different breweries.

Taking such foreign residents and travelers into account, the Seoul City Government’s 100 restaurant recommendations have been compiled into a book that has Korean and English.

The list is divided into seven different categories: Korean, Asian, Western, grill, plant-based, cafe and dessert, and bar and pub. Reflecting the growing demand for dietary diversity, it also introduced a separate list of 50 plant-based restaurants and cafes. A total of 20 industry experts participated in the voting of which eateries should make the list.

The books are available at embassies, tourism centers and major hotels in Korea, and Korean cultural centers overseas. They cost 10,000 won ($7.10).

For more, go to tasteofseoul.visitseoul.net