I’ve always loved visiting ultra-popular destinations during the off-season, whether it’s a September trip to the Greek islands post-summer crowds, a jaunt to the French countryside in the winter, a summer trip to a ski town or a weekend in an idyllic beach getaway as autumn arrives. The COVID-19 pandemic has only heightened the allure of the off-season—or at least, of the non-peak season—for me, because it’s so much more enjoyable to travel when you’re not stressing over reservations, traffic and general hoards of people all trying to do the same thing at once.

This is especially true when traveling to a ridiculously popular, yet oh-so-exclusive, destination like Saint Barthélemy. While there are plenty of luxurious island resorts all over the Caribbean, there’s something special about St. Barth, no matter what time of year you’re traveling there. I’ve been lucky enough to visit the isle a few times over the years, including over the exceptionally in-demand festive season in the past, as well as in the spring and early winter. Recently, though, I headed to the picturesque island as summer began to pick up, and while I wasn’t sure what to expect, I can confidently say that the so-called off-season might be the best time to plan a trip to Saint Barthélemy.

The Beach Club at Le Toiny.

First things first: don’t let the weather dissuade you. Yes, it’ll be warm, but it’s in no way stifling—in fact, the highest temperatures from May through July (and even August) are in the high 80s, just a few degrees above what you’d expect in December. Flights and hotels tend to be a bit less expensive than during the peak season, and you can actually score dinner reservations at normal hours. The truth is, there’s really no “off-season” in St. Barth, because it’s always a good time to visit—that is, aside from late August through mid-October, when most hotels and restaurants close for the season. Other than that, though, you’re good to go.

Those who love the feeling of the Caribbean outside of the peak season are often the same travelers who want a bit more privacy, particularly when it comes to accommodations. On my last trip to the island, I stayed at Le Toiny for the first time, and absolutely fell in love with the spot. The hotel is a newer addition to the St. Barth scene, largely due to a series of unfortunate events—the current owners purchased Le Toiny in 2015, and after completing renovations and reopening, had to close down and rebuild after the devastation of Hurricane Irma in 2017. The 17-acre hotel subsequently reopened its doors in October 2018, but just over a year later, had to shut down once again amid the coronavirus pandemic. Now, however, Le Toiny is back and better than ever. 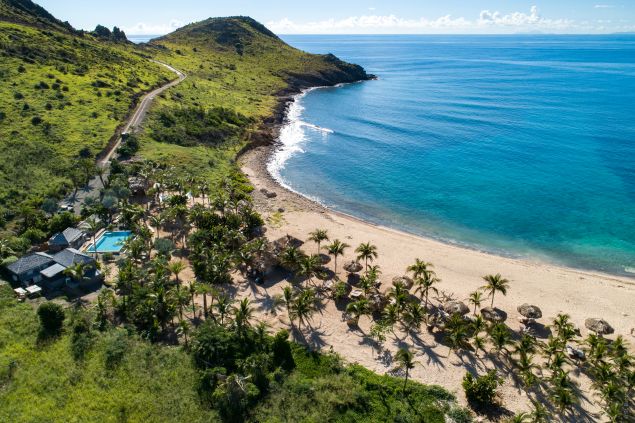 There’s a reason Le Toiny is the hotel of choice for those who want a more discreet and private St. Barth experience, and it’s largely due to the property’s secluded location. It’s not that Le Toiny is difficult to get to—at least not if you know where you’re going. The hotel is perched on a winding hillside above Anse de Toiny, on the opposite side of the island from the town of Gustavia, with entirely unobstructed views of the sea below. During peak season, be prepared for the usual agonizing traffic, but if you visit the idyllic island during less busy times, it’ll take less than 20 minutes to get from Le Toiny to Gustavia.

Yes, Le Toiny is wonderfully luxurious and elegant, but it’s set amid a far more rugged and natural backdrop than many of the other hotels on the island, and that works in Le Toiny’s favor. Instead of trying to subdue and tame the neighboring environment, Le Toiny accepts and appreciates the wild surroundings. 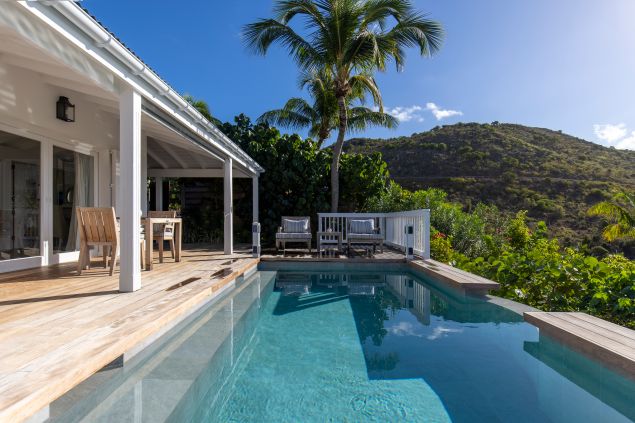 Le Toiny is composed of just 22 suites, ranging from sleek duplexes to airy, sprawling one- and two-bedrooms, all of which have private pools. The duplexes have a slightly more modern edge than the traditional beach villa-inspired suites, though all of the rooms feature vaulted beamed ceilings, cream and sand-colored furnishings, mirrored accents and wood detailing. 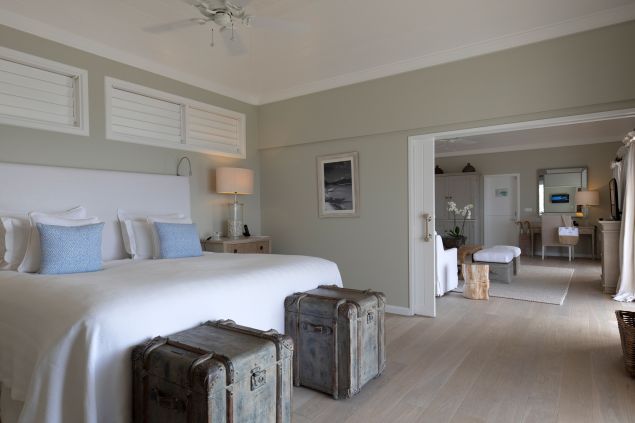 Inside the Signature Suite.

The rooms are some of the largest you’ll find on the island; the smallest accommodation is a 600-square-foot junior suite. It’s the coveted personal outdoor space that really makes all of these rooms stand out; you’ll find yourself actually leaping into the private infinity pools just outside your bedroom, and making the most of those in-between moments by basking in the sun or appreciating the colorful sunset from the comfort of the lounge chairs or breakfast table on your private patio. Le Toiny also consistently updates the accommodations and public spaces, as the hotel spends over $1 million a year as part of their renovation program, including a recent refresh of the Signature Suites, courtesy of Lady Bee Osborn. During peak season, rooms range from $1,000 up to $7,400 a night, but during the summer, the rates go down to between $990 and $1,200 a night. 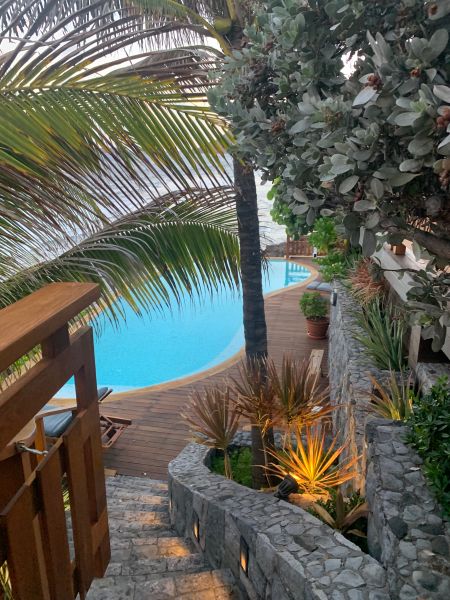 Those who want even more privacy could opt for one of the two four-bedroom villas that Le Toiny handles, including Villa Nureyev, the former home of the late Russian ballet dancer Rudolf Nureyev. It’s a very different aesthetic from the airy, beachy decor of the rest of the Le Toiny rooms; think lots of dark wood, heavy fabrics and ornate light fixtures, as well as an insanely stunning view of the rocky coast. 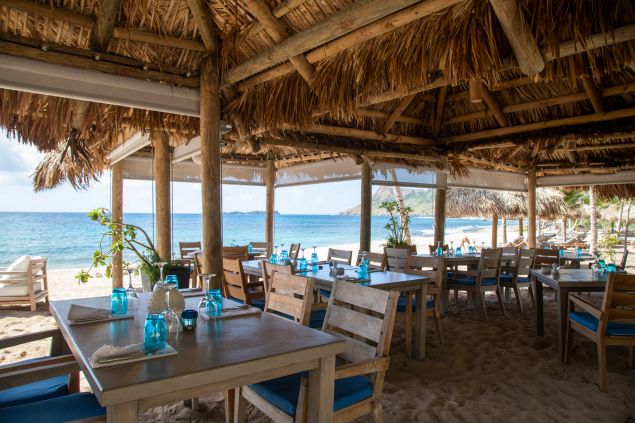 Head to the Beach Club in a custom Land Rover.

There’s a big pool for guests in the main lobby villa, but it’s the hotel’s exclusive Beach Club that’s the real draw here. In order to reach the Beach Club, which is located down a winding path just beneath the hotel, guests climb aboard customized, open air Land Rover Defenders that navigate the twists and turns of the narrow road before dropping you off at the waterfront destination. The restaurant might just be my favorite lunch spot on the entire island (you can’t go wrong with the lobster salad, tuna tartar, fries, and, of course, a glass of rosé), after which you can collapse on one of the cushy lounge chairs and live your best life underneath the palm trees. It’s a must-visit spot even if you’re not staying at the hotel, and if you’re in St. Barth during the off-season, it’s far easier to score a coveted reservation—during the festive season, it’s near-impossible. 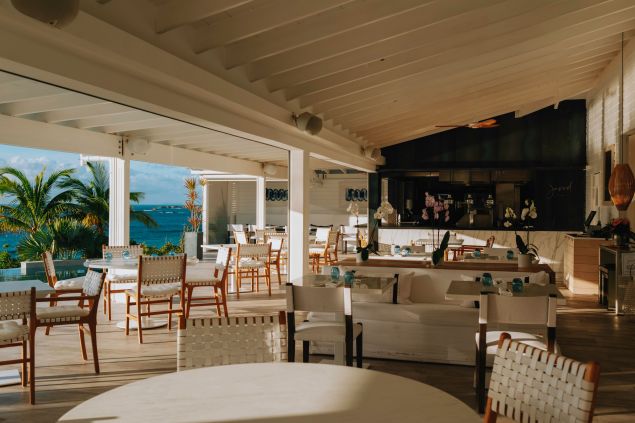 And now onto food.

Those who prefer to stay on-property will surely appreciate that Le Toiny has one of the loveliest restaurants on the island, which isn’t particularly surprising given that Le Toiny also happens to be the only Relais and Châteaux property on all of St. Barth. That said, the culinary scene in St. Barth is a huge part of the locale’s appeal, and you’d be remiss not to check out the myriad of other restaurants around the island during your stay. You can’t go wrong with classics like Le Tamarin and Shellona, and if you’re looking for an eatery located in Gustavia, check out L’isola or Bonito, the latter of which is ideally situated overlooking the yacht-filled harbor—that is, if you’re able to snag one of the outdoor tables with sea views, which is a far more manageable feat during late spring and summer. And, of course, a night of cabaret and dancing at Le Ti is quintessential St. Barth. 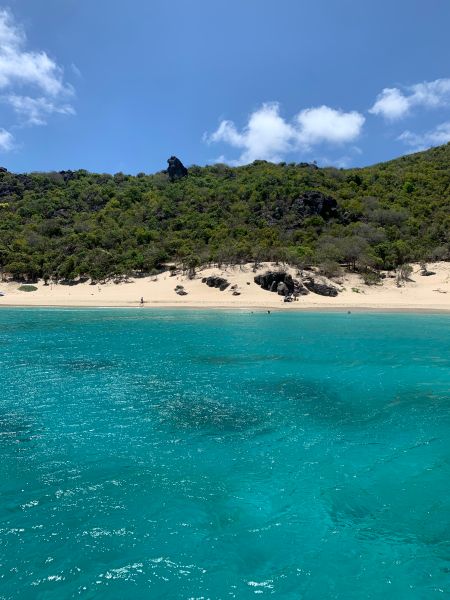 You could easily spend all day relaxing at the beach or sipping a cocktail at the pool, but you did come all the way to St. Barth, and exploring the island is key. A hike is a great way to take in the scenery of St. Barth, and there are trails for every hiking level. Petit Cul-de-Sac is a tricky one, but takes you to the dreamiest of natural pools. Colombier is surely one of the most beautiful (and, in the interest of full transparency, another of the most difficult), and it leads to an ultra-private, secluded beach that’s only accessible via walking or boat. Speaking of, a boat day is an incredible way to take in so much of St. Barth, since you’re able to easily reach certain areas that are trickier to access by land—like, say, the picturesque white sandy beaches and clear aqua water at Colombier.

Back on land, head into the town of Gustavia to peek into both the designer shops and local boutiques, and while you’re at it, sit down for a snack or drink at one of the chic restaurants, preferably one with a view of the many aforementioned yachts anchored in the harbor, especially if you’re there for the sunset. And no matter what time of year you’re visiting St. Barth, if you have a sweet tooth, you must stop into Le Petit Deauville for a scoop (or two) of gelato.

*The stay at Le Toiny was courtesy of the hotel. The views and opinions expressed are the journalist’s own.* 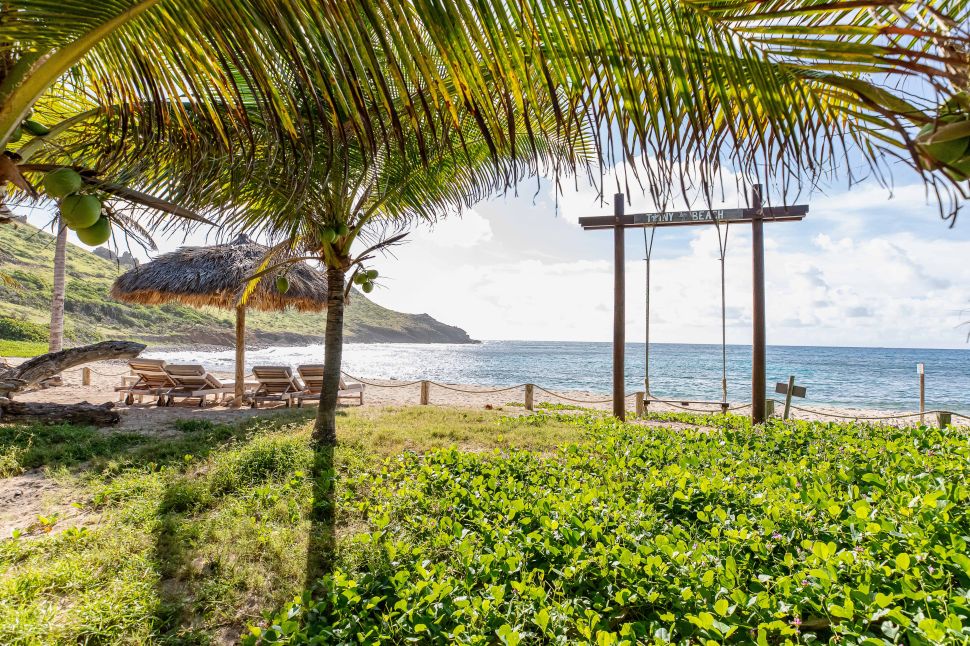