Bo loves being a free-range dog, unleashed and able to explore his domain. Now, we have a virtual satellite dog fence that lets us set up a truly invisible geofence that gives him the freedom to roam in a specific area that we designate.

The gadget is the Spot On Fence, and it’s a dog collar that Bo wears that instantly connects with satellites.

Before I share the details below, a video may help you understand best. We just set virtual satellite dog fences on our 10-acre Michigan property and our 5-acre Tennessee land. So before reading on, check out this video we just released that show’s the process.

Why did we choose the Spot On satellite dog fence? We need to know where Bo is and that he is safe. We do a lot of wilderness camping. Our RV land in Tennessee and the new 10 acres we just bought in Southwestern Michigan is heavily wooded. Each property has lots of wildlife and lots of opportunities for Bo to get tangled up in briars, burs, and bramble bushes.

Plus, there are mudholes that Bo seems to have a natural affinity for.

And there are roads bordering both properties.

We thought about installing the traditional wired invisible fence. But that would have been incredibly expensive. We’re talking multi-acre parcels here that we wanted to allow Bo to access unleashed. The wired fence version would have been several thousand dollars and required lots of excavation to bury the wire. In each location.

That was not going to happen.

Now, as stated in the video, the Spot On Fence system we purchased was not cheap. It costs $1,500 (you can take $100 off if you use the promo code  RVLIFESTYLE100). But since one collar can be used to set up multiple fences in multiple locations, we think it was money well spent. There are two ways to set up a fence. The first, as illustrated in the video, is to simply walk the boundaries of the area you want to fence in. I did that in Michigan, walking out about a seven-acre section of the 10 acres where I wanted Bo to be able to roam freely.

It was very simple. Using the Spot On app and having the collar pointing upward, I trudged across the property. If I came to a section I didn’t want to trudge through myself, I hit pause on the app, walked around the area, and then hit resume. The app connected the last location where I was before pausing with the area where I was when I resumed, drawing a straight line.

I did this across a thickly wooded area and also across a small lake at the rear of the property. Bo didn’t care about the thicket, and I wanted him to be able to wade in the lake a bit.

There was one concern: I was worried about whether the trees on our property would block the collar’s satellite connection. So I activated a feature on the app called forest mode. It kept the collar connected perfectly, even under a tree canopy.

For our Tennessee property, I set the fence using a recently added new feature. On the app, I called up a satellite view of our property and then zoomed in, using my finger to quickly draw the boundary on the screen.

This was very fast, easily edited, and worked perfectly.

At both Michigan and Tennessee, after establishing the virtual fences, I took the collar and the app – without Bo – and walked them off, making sure that the boundaries were accurate and the collar emitted warning tones when I approached the boundary line.

The accuracy of the SpotOn virtual satellite dog fence

The app shows where Bo is in real time

The SpotOn people say the collar pulls GPS location data from up to 30 satellites across four global satellite systems to maintain precise boundaries and keep tabs on your dog. The company says boundary lines need to be drawn with the understanding that they can shift between 3-10 feet due to something known as GPS drift, which is the difference between your actual location and the location recorded by a GPS receiver.

The GPS shift on smartphones, for example, is typically about 15 feet. The SpotOn people say their drift is considerably less, 5-10 feet, because it taps into more satellites than smartphones.

In practical terms for me, that means that at the road that borders our property, I would set the boundary about 15 feet back from the road – adding 5 feet as a safety margin to their maximum drift of 10 feet.

In Tennessee, I did the same thing with the county road out front.

Then it was time to test the collar with Bo.

Bo had no problem accepting the collar. I spent about 15 minutes a day for several days working with him to make sure it worked and he understood what the warning tones meant. In Bo’s case, he seemed to get the hang of it almost immediately. I think that is because since he was a pup, we have had a wired invisible fence system around our main sticks and bricks house.

The SpotOn collar sounds a tone when he gets to about 10 feet of the boundary. If he goes on, at 5 feet it changes tone and becomes more urgent. That was more than enough for Bo, as you can see in the video.

About a week into his training, as we were walking in the woods, he spooked two deer towards the back end of the property. They were inside the invisible satellite fence, but turned and went out down the holler. Bo gave a short chase but stopped well short of the boundary before the tones were activated.

There is an option on the collar to have it give a static vibration correction through a couple of prongs that can be installed on the collar so they are in contact with the dog’s skin. But we chose not to use that feature as Bo quickly adjusted to the collar.

What happens if Bo goes over the satellite dog fence boundary? If Bo strays outside the boundary, I get an alert on the app and my Apple watch

The first couple of times we trained, Bo did go through the boundary.

Instantly, I received an alert on my smartphone and on my Apple watch.

There is a cellular option (AT&T or Verizon only) that you can purchase (which I did) for $7.95 a month that will automatically initiate tracking until the dog is returned to the fenced-in area.

This cellular option is not needed, but I chose it for extra peace of mind. It shows in real-time Bo’s location on the app and keeps updating every six seconds until he returns to the protected fence or you turn tracking off.

Even when he is inside the boundaries of the virtual satellite fences, I can use the app to instantly show me where he is at any given time. That feature is standard with the app. A couple of times when I left the RV to look for him, I thought he may have strayed outside the fence. But the app showed me he was just behind some trees or on the other side of a hill.

Battery life and other features

We have found the collar needs to be charged each day. We typically put in on Bo before he goes out of the RV. If he comes inside for periods of time, I take it off and deactivate it on the app, then reactivate and put it on him when he goes back out.

Charging takes about three hours, and I only received a low battery alert one time, about 9 PM on a day he had worn it pretty much since mid-morning.

The two fences I have set up so far are areas about 3 acres in size in Tennessee and 7 acres in Michigan. The SpotOn people say it can set a fence in areas as large as 1,000 acres.

Conversely, though, they say it is designed to perform best on properties that are at least 1/2 acre in size.

The biggest appeal of the satellite dog fence system for us is the ability to very quickly set virtual satellite fences anywhere. We plan to add additional fences at our son’s property not far from us and at a couple of our favorite boondocking areas in state and national forests.

The collar is waterproof to IP67 standards. That means Bo can wear it in the rain, in snow and even swim with it. It’s hard plastic, easily adjustable, and not overly heavy.

The satellite emblem must be at the top of the dog’s neck, pointing at the sky. It took me a few tries to get it adjusted tight enough, so it doesn’t slip to the side as Bo romps around. I found that if I could slip one finger between it and Bo’s skin, it would stay in place.

We’ve had this collar for a little over a month now, and it has worked very well for us.

Bo, as you saw in the video, seems very content.

We’ll circle back and update this review in six months or so.

But so far… so good. Great, really,

What do you think of this Satellite Dog Fence?

Let’s us know in the comments.

Where are you RVing Next? From “The Historic Coast” of St. Augustine to “The Space Coast” in Cape Canaveral and “The Treasure Coast” of Port St. Lucie – the Atlantic Coast of Florida has something to offer for everyone.

We cover a variety of areas in this guide, from sugar-sand beaches along the coast, inland to Florida’s magnificent first-magnitude springs, to the largest lake in the state and the subtropical wilderness of the Everglades.

Florida’s Atlantic Coast does not disappoint… we hope you’ll take the time to see for yourselves! 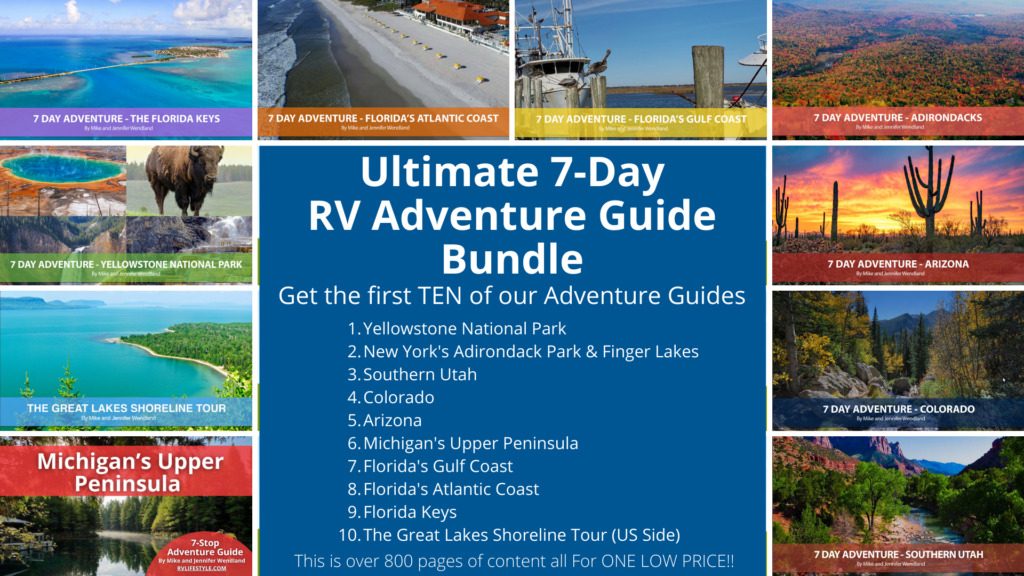 We’ve written a library of RV Travel books that lay out guided RV explorations of scenic areas of the US that we’’ve explored and think would make an excellent RV trip for you.

In each location, we provide a suggested route and itinerary (7 stops in each guide, one for each day of a week trip!) as well as links to multiple campgrounds and boondocking spots, local tips, and interesting things to do at each location.

You can hit everything in seven days, do a whirlwind weekend tour, or you can take your time and explore the area over a 2+ week period.

Planning an RV trip can be very time-consuming so that’s why we’ve done the research for you! Just take our guides and use them. We’re sure you’ll have an RV trip for the ages! Instant download. CLICK HERE for information on our RV Travel Guides