Princess Cruises has a fleet that is growing in size – and not just in terms of the number of ships.

The trend for Princess, as it is for many cruise lines, is to build ships that are bigger and bigger – accommodating more guests and making room for exciting new features. Cruising is all about the ‘new’, and bigger ships mean you can fit more new in.

Ahead of the launch of Sun Princess in 2024, the first Sphere-Class cruise ship in the fleet, let’s take a look at the rest of the ships that Princess owns, and just how big they are.

How big are Princess cruise ships?

Princess Cruises’ current fleet includes a mix of mid-size ships that cater to between 2,000 and 3,600 passengers. The cruise line doesn’t have any super-ships, but its next generation of ships will be larger, accommodating around 4,300 guests.

This is still somewhat short of the largest cruise ships in the world, but that’s not what Princess is aiming for. Instead, it is gradually increasing capacity through larger ships, without spending huge sums on ships that the cruise line maybe can’t fill.

Which is the biggest Princess Cruises ship?

The two biggest ships in the Princess Cruises fleet are Sky Princess and Enchanted Princess. Both have a gross tonnage of 145,281 which is marginally bigger than their newest sibling Discovery Princess. Both ships have a maximum guest capacity of 3,660. 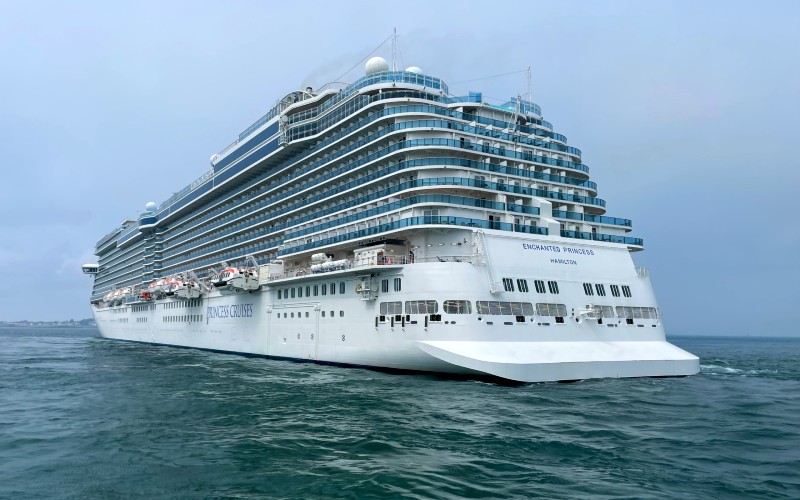 There are six ships in the Royal Class, but the earlier ships – Royal Princess, Regal Princess and Majestic Princess – are slightly smaller. They each have a guest capacity of between 3,560 and 3,600.

Which is the smallest Princess cruise ship?

The current smallest ship in the Princess Cruises fleet is Coral Princess, the first ship in the Coral Class. It has a gross tonnage of 91,627 and a maximum guest capacity of 2,000 while carrying 895 crew.

The Coral Class ships were built to Panamax specifications, meaning that they were a suitable size to be able to sail the Panama Canal, which opens up more opportunities for itineraries (and allows the ships to switch between the Atlantic and Pacific coastlines of the US much easier. 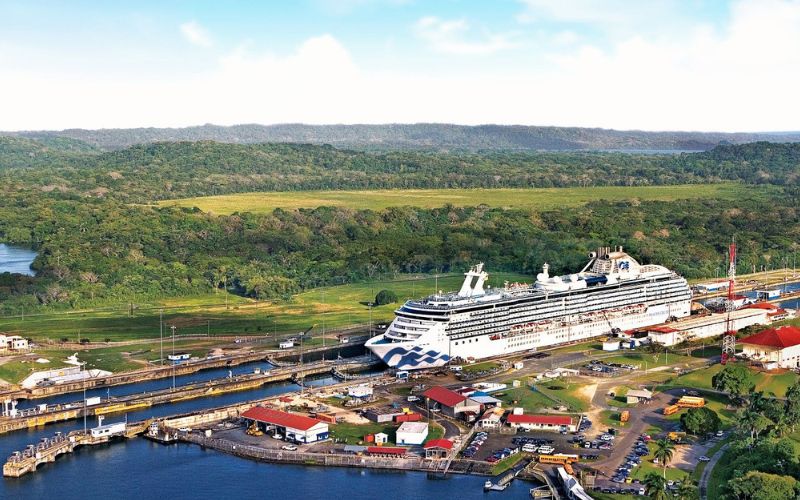 Coral Princess in the Panama Canal

Of course, since the two ships launched there have been more locks opened in the canal which have more space, so some larger ships are still able to make the journey.

Princess Cruises has previously owned several smaller ships, but over time has modernised its fleet by selling off some of its older ones. The very first ship in the fleet was Princess Patricia, which only sailed for the cruise line for a year and had a gross tonnage of just 6,062.

More recently, the Sun-Class ships have been gradually sold off by the cruise line, with a gross tonnage of around 77,500. As I say, the trend for Princess is very much to move to larger ships.

Here’s a breakdown of all the Princess Cruises ships by size, including the information we do know about the Sun Princess due to launch in 2024:

The Different Classes of Princess Cruises Ships (Biggest to Smallest)

Princess Cruises’ ships are split into different classes, and every class that is launched is bigger. The largest class of ships currently is the Royal Class, but the new Sphere Class of ships that has been ordered will surpass it.

Here’s a breakdown of the Princess Cruises ships by class:

It’s worth a quick discussion about Grand Princess when we’re talking about Princess Cruises ships ranked by size.

Grand Princess, when she launched in 1998, was the largest cruise ship in the world at the time. And she remained the flagship of the fleet until 2013, when Royal Princess launched, despite numerous ships being built for the fleet that were bigger. 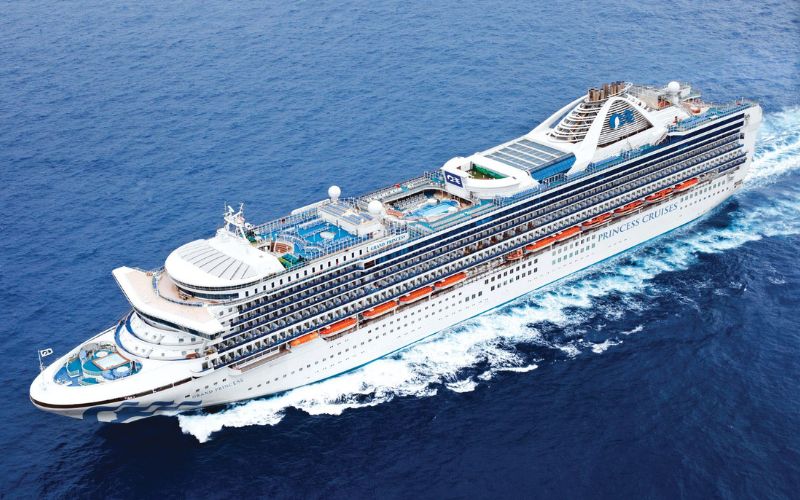 While she was the founding ship of the Grand Class, that wasn’t originally the case – when she was first launched she was considered to be a larger sister to Sun Class ships. It was only when the next ship launched, Golden Princess, that the Grand Class was created.

There’s no definitive answer as to whether bigger ships are better. It depends on a number of factors.

The pros of bigger ships are:

Meanwhile, the pros of smaller ships are:

For the sake of comparison, let’s take a look at Sky Princess and Island Princess, which are near the top and bottom of the list in terms of size. I’ve chosen these two because they offer some itineraries that are comparable as well. 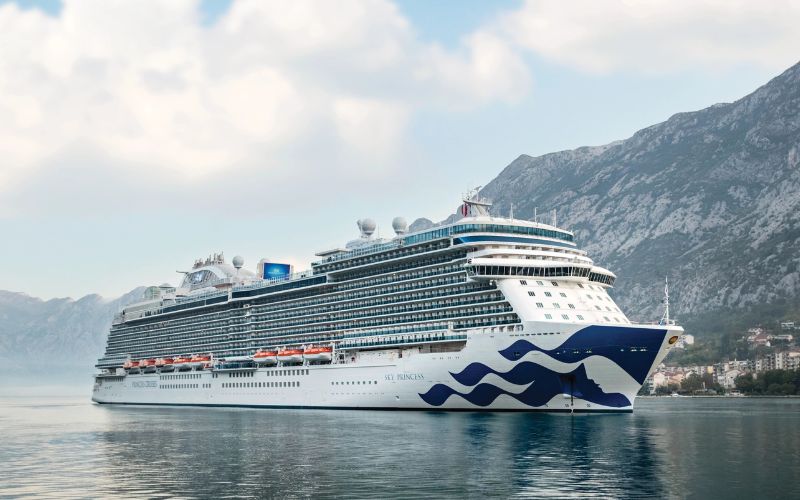 Why are newer ships less expensive?

There could be a few reasons but mainly it’s down to the fact that because there are more passengers on board, the ship is able to charge less to still make a good profit.

Prices will vary all the time, so this is a guide, and you might find that older ships sometimes have cheaper fares due to their lower popularity with guests. It depends on a number of factors.

But what’s clear is that, if you want the newest and most modern ship then you’ll want a bigger one. Whereas if you prefer a quieter cruise with less queuing then a smaller ship is the better choice. 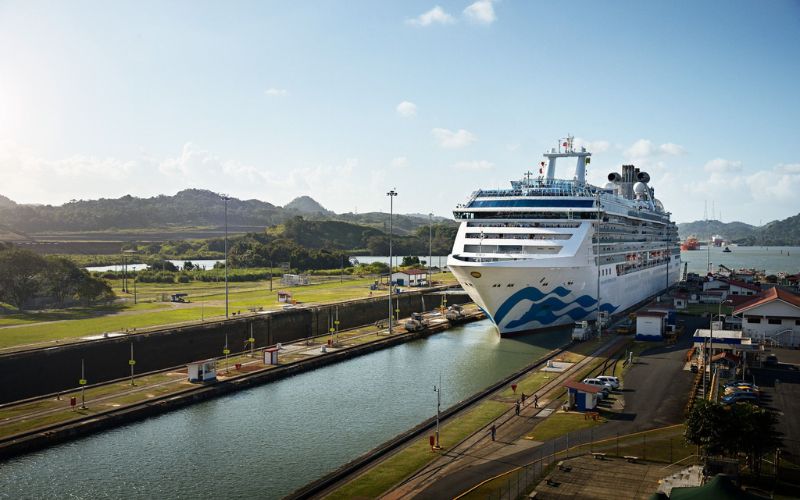 Island Princess in the Panama Canal

It’s clear that, in the view of Princess Cruises’ senior management team that sign off on new ships, bigger is better. And there are a lot of benefits to bigger ships, including the space to add exciting features and the potential for lower fares.

But there’s still something quite calming about smaller ship sailings, and the feeling that you do have a more relaxed and quieter experience. So as the trend does continue for Princess to build bigger and bigger, consider booking a cruise on their smaller ships before they are also sold off, like many that used to occupy the fleet.

You’re welcome to share this guide with your friends if you think it may help them too.