CAMP HILL, Pa. –­­ The Pennsylvania Recreation Vehicle and Camping Association (PRVCA) announced the results of its 2022 officer and board member elections during its virtual annual meeting on Nov. 16.

In addition to hosting America’s Largest RV Show each September in Hershey, Pa., PRVCA represents more than 350 RV dealers, manufacturers, campgrounds and affiliated members who are interested in expanding and improving the camping industry in Pennsylvania.

Casey Colton is an owner and chief operating officer of Colton RV, a family-owned group of dealerships started in 1962 by his grandfather, Bill Colton. Colton grew up at the dealership where he assisted with Open House events as a high school student. He worked full-time while pursuing his college degree and he moved his way through all the positions from the technician counter to parts management. After earning his degree in Operations and Supply Chain Management, he took job at New Era Cap Company as its sourcing coordinator, focusing on refining operations processes.

He eventually rejoined Colton RV and brought his operations knowledge to the service department. In 2020, he became the company’s first COO.

Colton RV has two dealerships and a service center in western New York and a dealership in Wind Gap, Pa., that was acquired earlier this year. 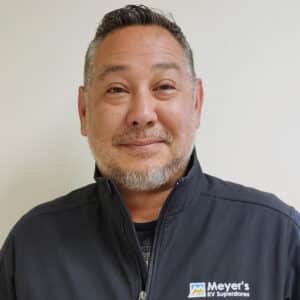 Charles Jablonski, Meyer’s RV Superstore, Harrisburg, Pa., is a 25-year industry veteran. He started his RV industry career in 2005 at Grumbine’s RV Center as a sales consultant. He transitioned to sales management and served as both a sales manager and general sales manager for Boat N RV, Camping World and Campers Inn RV.

He joined Meyer’s RV of Harrisburg as general manager in 2018, when the company opened in Harrisburg. The company has 12 locations, including three more in Pennsylvania – Mount Morris, Pittsburgh and Sayre, Pa.

PRVCA thanks Beverly Gruber, retired, PCOA, for her service on the board.

The PRVCA board of directors works with the staff to establish and execute the association’s goals and mission throughout the year.

The PRVCA Annual Meeting can be viewed on the YouTube channel at annual meeting awards2022 – YouTube. (see video below)