The amount of times I’ve said that next-gen PC hardware is right around the corner has to be comical at this point. We’ve been getting so many leaks as of late that there’s something new to talk about every single day. You wake up, have breakfast, and by the time you’re done someone has already tested the next RTX 40-series flagship, or—in this case—Intel‘s next top-end CPU.

Reported by popular insider HXL (@9550pro), a user on Bilibili (translated to English) has posted a video review of the Core i9-13900K. You read that right, a proper, fully-fledged video testing Intel’s upcoming flagship. The video is from Chinese content creator by the name of “Extreme Player“, who was somehow able to get his hands on a Qualification Sample (QS) of the 13900K, and put it up against the Core i9-12900K.

As for the test bench, Extreme Player used an ASUS Maximus Z690 motherboard, equipped with 32GB of DDR5-6400 memory from Team Force, a 360mm AIO liquid-cooler, and a 1500W power supply from Cooler Master. Moreover, the tester used a GeForce RTX 3060 Ti graphics card across both CPUs. It’s also important to note that the core voltage of the 13900K was recorded at around 1.34 volts, which is higher than the default voltage for Intel flagship CPUs.

Not only that, but the single-core boost can go up to 5.8GHz in some cases. This matches figures derived from previous leaks, so we have reason to believe this is what the retail units will ship as. The 12900K, on the other hand, can do 5.2GHz single-core in best case scenarios.

Running down the specs real quick, by now everyone knows that the 13900K is a 24-core chip, with 8 P-Cores and 16 E-Cores. This review only reiterates that. Furthermore, the CPU comes with 36MB of L3 cache and 32MB of L2 cache that combine together to make 68MB of what Intel calls “Smart Cache“. When it comes to power limits, expect a TDP of 125W (PL1) with an MTP around 250W.

Coming to the performance itself, the Core i9-13900K absolutely destroys its predecessor when it comes to synthetic benchmarks. Looking at the collective average of over 10 different benchmarks, the 13900K posts 35% higher numbers in multi-core tests, while being about 10% faster in single-core tests. In PugetBench, the 12900K is outperformed by the 13900, with the latter being 2.3x faster. 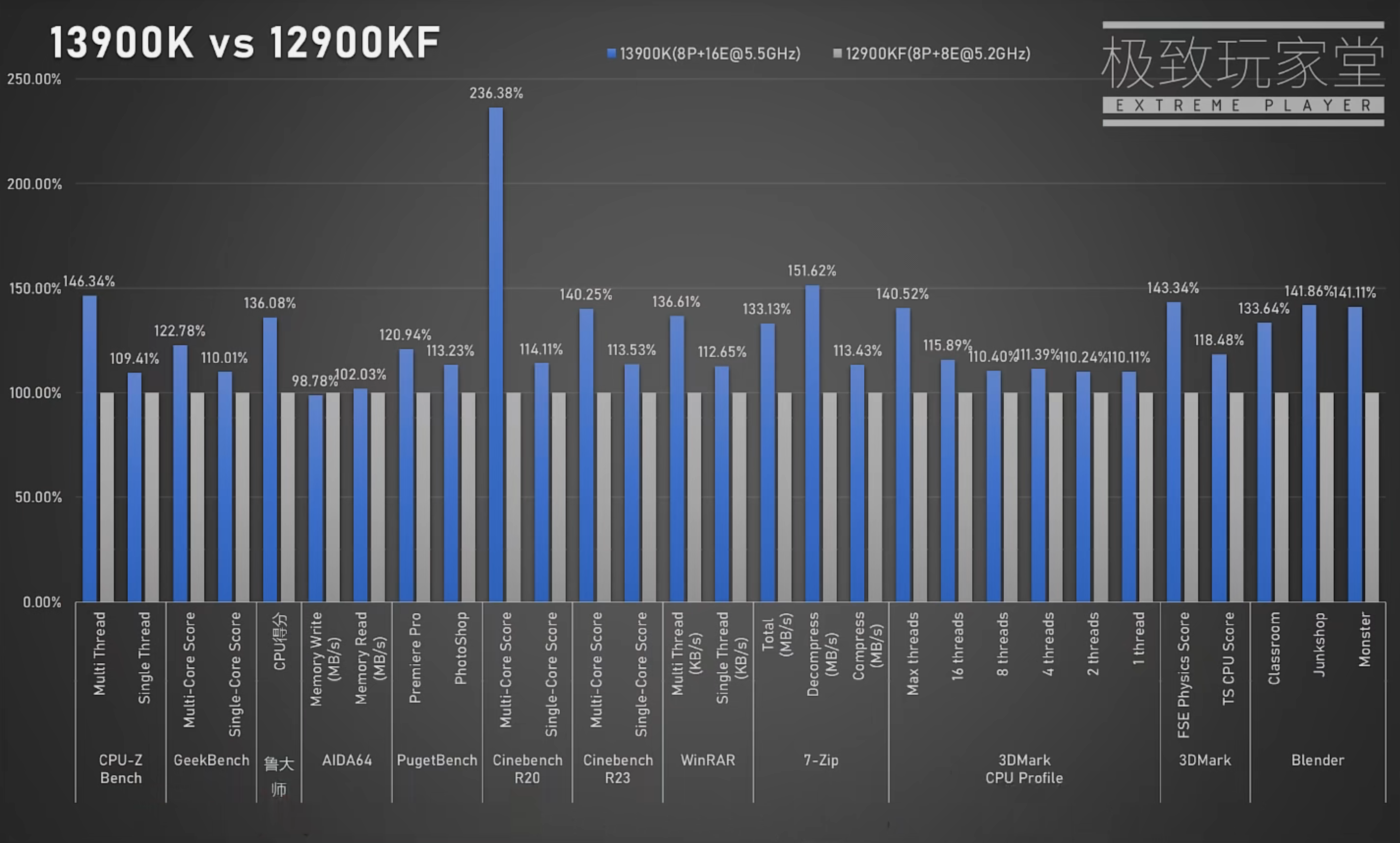 Core i9-13900K vs. Core i9-12900K across the board in multiple benchmark tests | Extreme Gamer via Bilibili

However, one key distinction between the 12900K and the 13900K is their clock speeds. As mentioned before, the Raptor Lake flagship runs at much higher clocks than its Alder Lake cousin, which is mostly the reason as to why it performs better here. At the same clock speeds, there is little to no difference between the two chips, indicating how the generational improvements at play are simply not enough to offer better performance. 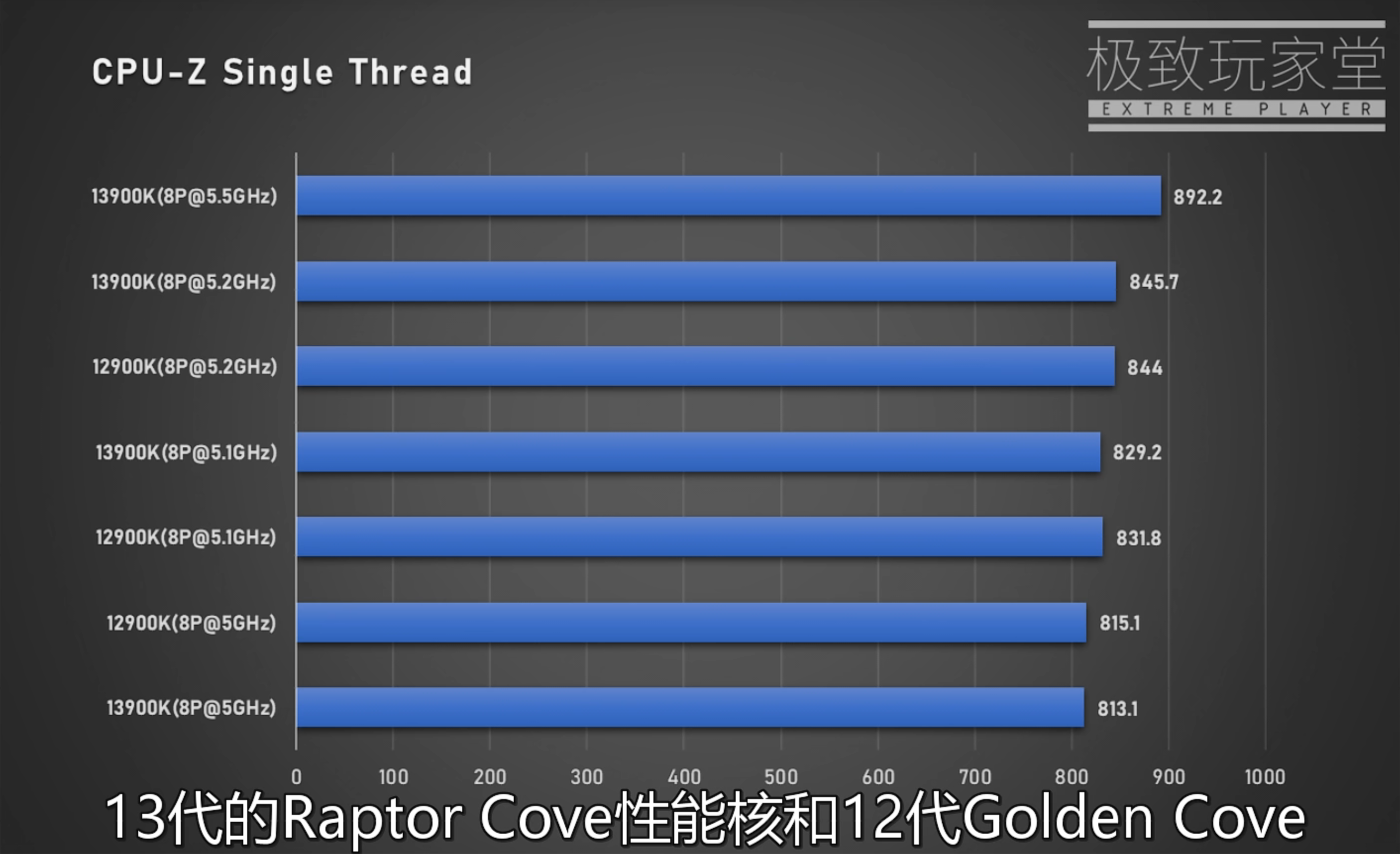 If this is indeed representative of the final product then it’s easier to understand why Intel bumper the core and cache counts of the top-end SKUs, because Raptor Lake silicon itself isn’t bringing any IPC uplifts. This makes for quite the completion with AMD—whose Zen4 architecture is said to offer major generational improvements—so it will be interesting to see how the two lineups stack up against each other.

Who wins single-core, remains to be seen. Intel has long been the king of the hill in that department, but Zen4 is creeping up to potentially be an unexpected upset for the Blue Team here, too.

Finally, we have the Intel XTU benchmark to look at, and even though this doesn’t actually provide any comparable figures, it still is very insightful. When running close to its full potential, the CPU was pulling 420W (PL4) from the power supply and broke the 100°C barrier. That, too, with a 360mm AIO keeping it under control.

So, it would be reasonable to say that Intel, in its pursuit of silicon dominance, has created yet another heater of a CPU that is struggling to remain cool even with a high-end cooler on board. AMD already has the efficiency game locked in, but if Raptor Lake is this bad at power consumption, the Red Team’s lead would only extend further. 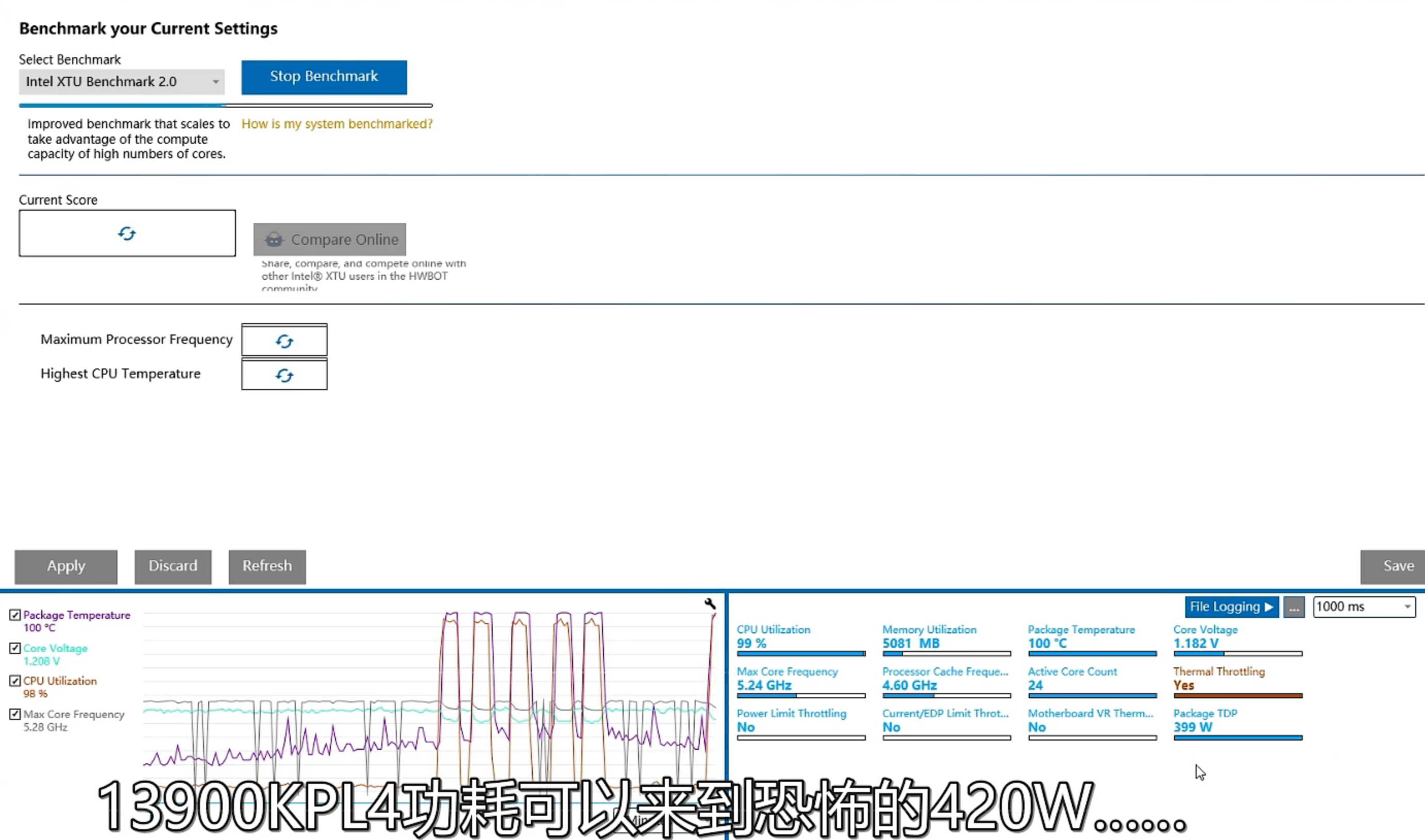 All in all, the Core i9-13900K is looking like a monstrous performer, as one’d expect from a new desktop flagship. However, the fact that this increase in performance comes with an equally inefficient increase in power consumption, and potentially heat, is not ideal.

The goal for next-gen hardware should be to push the limits of what’s possible, whilst trying to be more eco-friendly. Of course, pumping more power would make a chip run faster, so it’s not exactly an engineering breakthrough if you ask me.

Still, I should mention that all of this information is based on pre-release clock speeds, which are subject to change. So, take everything you read with a grain of salt. As we inch closer and closer to the eventual release of 13th Gen Core series in October/November of this year, the fog will start clearing out soon. With AMD’s Ryzen 7000 series expected to launch in September, it’s time once again to see the two giants battle it out for the consumer’s pocket.