Long before swanky restaurants like Nobu, Fig & Olive and Musaafer took up residence inside Houston’s Galleria, serving as anchors for the mall’s robust dining scene, all eyes were on the Cheesecake Factory. Yes, that Cheesecake Factory.

I was 10 years young in 1993 when the popular chain announced it penned a deal to open its first Texas outpost in Houston. I recall the excited chatter among my parents and their friends. They had heard good things from people who visited the Cheesecake Factory in other cities, and like most, they were intrigued by its hefty dessert menu.

A couple of years later, Cheesecake’s monumental buildout at the Galleria’s main entrance began, and its progress was well-documented. Photos of construction workers rearranging the iconic letters of the Galleria sign to make way for the 12,000-square-foot restaurant graced the front of the Houston Chronicle business section. The letters could eventually be seen in the same spot, simply raised above the restaurant’s second level. But at the time, the news made the papers and fueled excitement.

Workers remove the Galleria sign fronting Westheimer to make room for the new Cheesecake Factory restaurant. The letters, e and r, have already been removed.

So, why was there so much buzz about this restaurant in particular?

Cheesecake Factory was first launched in Beverly Hills in the 1970s by David Overton, who built the brand around his mother Evelyn’s famous dessert. Other California locations followed, but it wasn’t until the early ’90s that expansion began into other states. In Houston, if you knew someone who had dined there, they were either from California—which automatically equated to cool—or they were likely well traveled.

As a child, I thought of it as any other faraway attraction, like a New York hot dog stand or a Chicago deep dish pizza restaurant, so when it was to open in my neck of the woods, I felt like it was a big deal. That it was coming to the Galleria, a place which, especially as a child, seemed so big and fancy with its swanky, high-dollar boutiques, was icing on the (cheese)cake.

While Cheesecake would bring something new and unfamiliar to the table, Houstonians had long considered the mall a dining destination in the heart of Uptown. The Galleria dates back to 1970 when it was opened by Gerald Hines and coined “the ultimate city under glass.”  With its central locale, the mall was a draw for retail, dining and leisure for people from all corners of the city. Even before all of its added wings and extensions, it was the home of many places to eat.

Read more about Houston in the 1990s

Luxury retailers Neiman Marcus and Marshall Fields each had cafes inside their multi-level stores, and there were a number of choices peppered throughout the main mall, from casual restaurants like the Wall Street Deli to more formal ones like Delmonico’s steakhouse. The majority of the lot, however, was part of large chains.

With its prime locale facing out to Westheimer, Cheesecake Factory was a far cry from the restaurants that crowded the Galleria’s food court. When it finally opened in November 1995, it featured its own private entrance, allowing guests to valet and enter the restaurant directly, as opposed to passing through the busy mall. 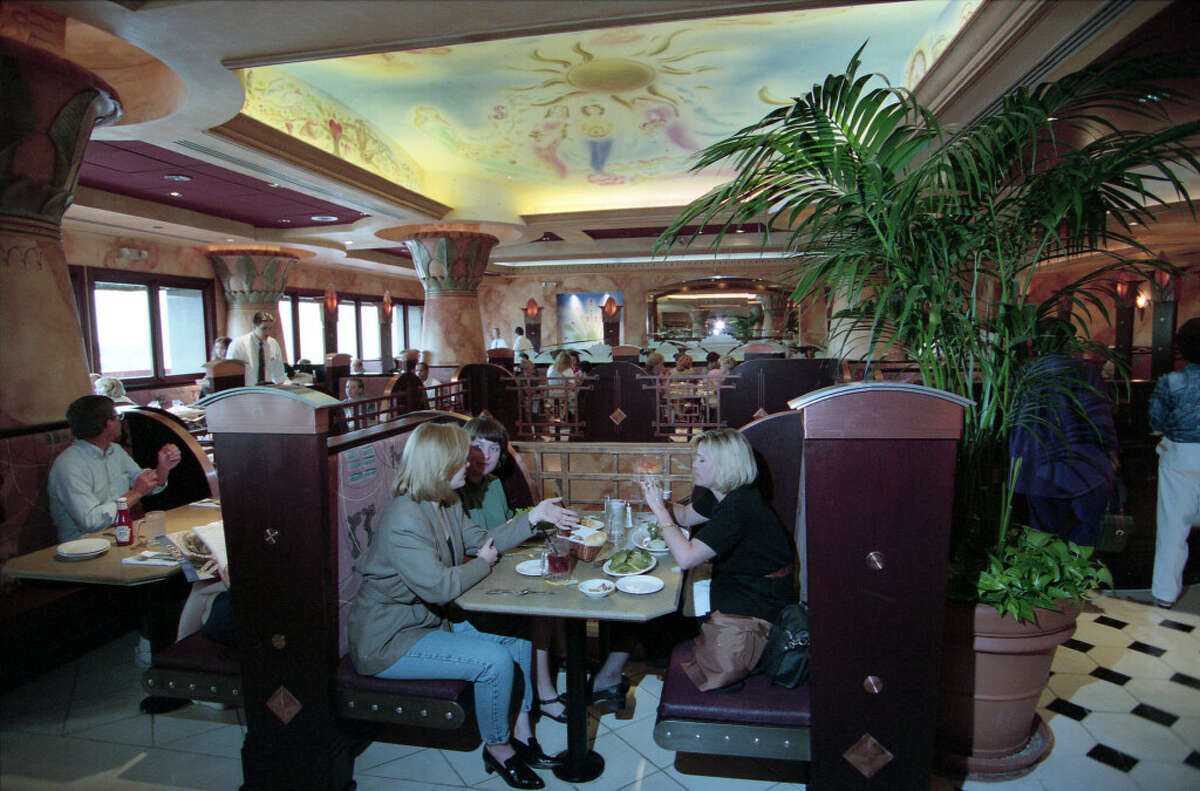 Diners at The Cheesecake Factory at Houston’s Galleria shopping mall in June 1996.

Houston wasn’t short of attractive restaurants at the time, but Cheesecake managed to impress in its own right. In 1996, the Houston Chronicle published a “best of” Galleria dining list. There were 39 restaurants inside the mall at the time, with places like Starbucks securing “Best Coffee Shop,” Shuckers for “Best Sports Bar,” and La Madeleine for “Best People Watching.” Cheesecake was awarded “Best Desserts,” maybe not so surprisingly, and “The Trendiest” with the clip citing that the restaurant had “everything from art deco sconces to a spiral staircase.”

The grand staircase allowed guests to pass through the restaurant’s two levels, and tall, lush greens warmed the space, while whimsical murals were splashed across the ceiling. White and black diamond-patterned floor tiles contrasted the dark furnishings and deep maroon accents.

Once seated at an oversized table or banquette, diners were given a glossy, 19-page, spiral-bound menu. The book not only showcased a vast selection of dishes, including countless flavors of fruit-, nut- and chocolate-topped cheesecake, but ads for Galleria stores touting swimwear, jewelry and furniture were illustrated across its thick pages. The unique—and sneaky—way of advertising the mall’s retail offerings garnered attention from Houston Chronicle business reporter Greg Hassell, who wrote: “Love them or hate them, these new ads demonstrate a tenacious adaptability in a changing world, like woodpeckers nesting on the space shuttle. They’re pesky, but they sure do get your attention.”

Cheesecake was open daily, even offering late hours, remaining open until 11:30 p.m. on weekdays and 12:30 a.m. on weekends. Plus, whether guests wanted to dine in or not, they could simply visit the cheesecake counter and place an order to be shipped anywhere in the U.S. 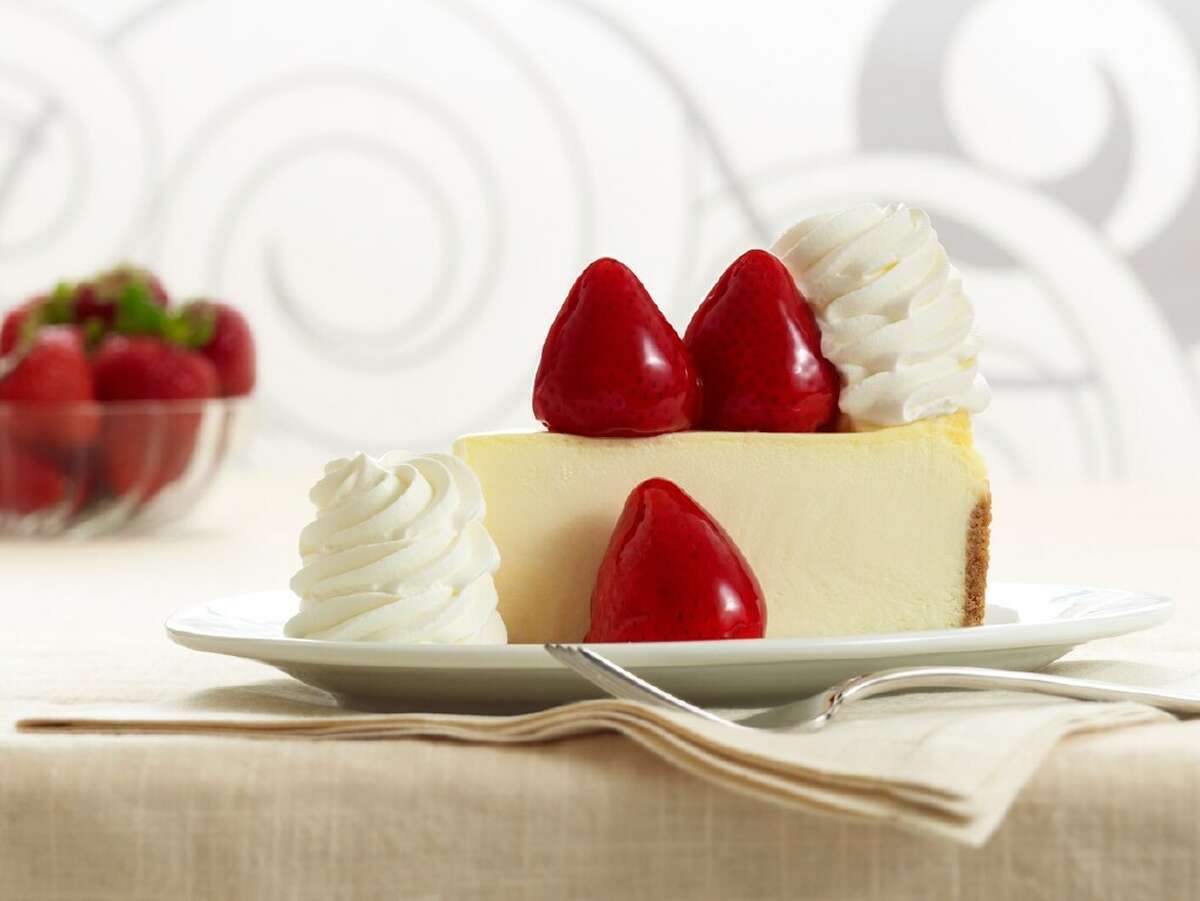 A slice of cheesecake from the Cheesecake Factory.

Courtesy of the Cheesecake Factory

It wasn’t just the vibe and the substantial dessert menu people were talking about. Cheesecake Factory was a success when it came to its food too, and it did not skimp. Multiple reviews from back then made note of the sizable portions, as in a Cobb salad large enough for three. There was acknowledgment of a grilled portobello burger, priced at $7.95 at the time, and how Cheesecake was hip to portobello mushrooms being the “food of the moment”.

The chain restaurant managed to keep up with the trends in the ’90s, but Houston’s food scene would change tenfold in the years to come. In the aughts, dynamic independently owned restaurants like Tony’s and Hugo’s were making a splash, Houston chefs began bringing home James Beard Awards, and the city was slowly becoming known as one of the best food cities in the country.

Major changes were happening within the Galleria, too. In 2016, after an immense renovation, Saks Fifth Avenue opened its 20,000-square-foot, two-story store inside the mall, complete with a revamp of its 51Fifteen restaurant on the second floor. The same year, news hit that Nobu and Fig & Olive would open their first Houston outposts, taking up residence in the old Saks space. While different neighborhoods in the city were giving way for locally owned concepts, the Galleria was becoming a destination for internationally recognized restaurants.

In 2017, the Hakkasan Group opened Yauatcha, an ultra-modern Cantonese dim sum tea house, inside the Galleria’s “jewel box,” the mall’s latest add-on. It was the second U.S. outpost of Hakkassan’s original Michelin-starred London restaurant, which opened in 2004. The concept failed to take off, permanently closing its Houston location just three years later, but it, along with other newcomers, certainly marked a new era for Galleria dining.

Cheesecake remains a Galleria stalwart, but today, its majestic entrance seemingly falls in the shadows of newer restaurants, like original Houston concept Musaafer, and Canadian-based Joey Uptown, currently operating inside the jewel box. An influx of restaurants in the city and its many suburbs have led diners to stray, which further proves that Cheesecake’s heyday has passed.

The chain’s run is by no means over—after all, it remains a highly sought-after choice for the mall’s many international visitors, and one of the only places in town where you can choose from one of 35 slices of cheesecake. For many Houstonians, though, it’s the wave of ’90s dining nostalgia that keeps them coming back for more.

Read more Houston in the ’90s