Doubleday by Hilton at Virginia Beach General Manager
John Zirkle has pitched in with housekeeping chores amid a severe staffing shortage.
“We do what you
have to do,” he says. Photo by Mark Rhodes

Twenty years ago, John Zirkle was just starting out in the Virginia Beach hotel business as a houseman, stripping bed sheets and doing laundry. Fast-forward to today and he is general manager of the Doubletree by Hilton at Virginia Beach and president of the beach’s hotel association.

Lately, though, Zirkle’s had to recall some of his skills as a houseman. He’s been pitching in as part of the hotel’s housekeeping staff as needed. That’s been necessary in order for the Doubletree to grapple with a severe staffing shortfall amid what Zirkle calls the worst labor market he has ever seen.

“We do what you have to do, any staff member who can lend a hand,” he says.

Meanwhile, there’s strong competition for staff among hotels. “It seems like we are all fighting over the same housekeepers,” Zirkle says.

Hotels and even restaurants throughout Virginia and the nation are facing the same hiring hurdles. After a devastating year for the hospitality industry, during which the COVID-19 pandemic forced many businesses to lay off staff, hoteliers in some tourism destination markets, such as Virginia Beach, are expecting travelers to return slowly this summer as more of the population are fully vaccinated and feel comfortable with taking trips.

But to operate efficiently, businesses need employees. And many hotels are struggling to find workers for jobs ranging from front desk attendants and housekeepers to maintenance and restaurant servers.

Half full or half empty?

This summer, roughly 72% of Americans plan to travel, according to the U.S. Travel Association. That’s compared with 37% last year. And nine out of 10 of those planning to travel will be staying in the United States. 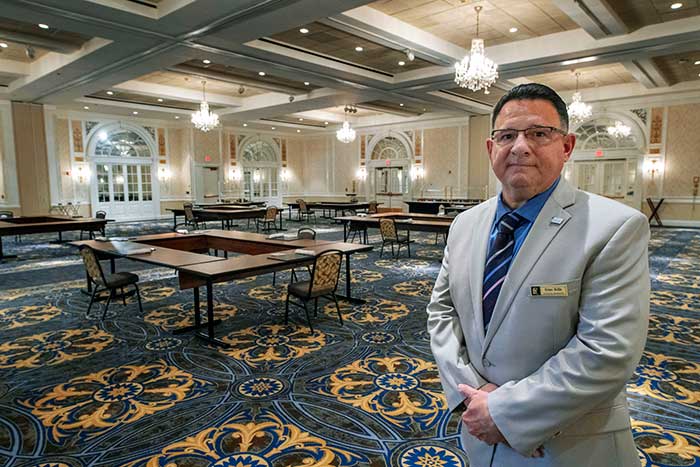 But just ahead of the traditional busiest hotel season of the year, only about 40% to 50% of the jobs at Zirkle’s Doubletree were filled as of late April. Typically, his staff doubles to about 200 employees during the summer months. Reaching that total this year is questionable, he says.

Similarly, Delta Hotels by Marriott Virginia Beach Bayfront Suites, which opened in March, had filled only half of its staff positions leading into May. The hotel is offering signing bonuses and referral bonuses to attract employees for a variety of open positions.

“I have been in this business for over 25 years, and I have never seen the lack of workforce we have right now,” says Duane Gauthier, managing director of Commonwealth Lodging, a company that manages hotels in Virginia, Florida and Connecticut, including Virginia Beach Bayfront Suites.

“The hotels in general have been doing very well,” he says. “It’s the staffing components, the ability to get people to work, that is the issue.”

This all is happening as state tourism officials predict that leisure travel will improve this summer, compared with a major drop-off during the pandemic last year.

Though travel likely won’t return to pre-pandemic levels this year, “we are seeing that traveler confidence is increasing,” says Caroline Logan, director of communications for the Virginia Tourism Corp. “I think fear has abated and people are starting to move again.”

But there are a few reasons why potential tourism employees may not be seeking jobs right now, says Eric Terry, president of the Virginia Restaurant, Lodging, & Travel Association.

Some who were unemployed at the height of the pandemic still are receiving state and federal unemployment benefits through a variety of pandemic relief programs that have been extended through Sept. 4.

Parents may not be seeking work due to child care needs, as many school systems have not fully returned to in-person classes. And many laid-off hospitality workers may have changed careers, says Terry, adding that some hotel marketing and sales professionals found employment in the insurance and real estate industries.

He estimates that about 56,000 hotel jobs were lost in Virginia during the past year. Nationally in 2020, nearly 4 million hospitality jobs were lost due to the pandemic, according to the American Hotel & Lodging Association.

Hotels in leisure vacation markets are the ones bringing back most hospitality jobs, Terry says, not hotels that rely on business travelers. That’s because corporate group travel hasn’t returned to pre-pandemic levels, and it is uncertain when that will happen.

That’s the case with the Hotel Roanoke & Conference Center, where the hotel’s business from companies and other corporate gatherings is “tragic,” says Brian Wells, general manager.

As of mid-April, the Hotel Roanoke’s conference business was 85% below pre-pandemic levels, and plans for the future were unresolved due to ongoing state attendance limits on indoor gatherings.

“Our groups that are contracted continue to have low confidence to meet,” Wells says. “It’s starting to affect our business levels this summer.”

The hotel furloughed 260 employees at the start of the pandemic, but it was able to rehire some with the help of forgivable loans through the federal Paycheck Protection Program.

Even so, jobs associated with group business sales are not among the hotel’s openings. “Until [the conference and] meeting business comes back, many of the furloughed employees can’t [return]. We just don’t have work for them,” Wells says.

There’s another nationwide challenge to landing employees for hotels and restaurants: the major decline in international employees, often students, who travel to the United States through summer work programs. A Trump-era presidential proclamation to temporarily suspend entry into the United States for exchange workers with J1 visas expired March 31. Still, some J1 visa applications remained stalled, and companies worried that workers would not make it into the country for the summer season.

Nonprofit travel groups, such as New York-based InterExchange Inc., which works with Virginia Beach businesses, have written letters to encourage President Joe Biden to push the U.S. Department of State to work with consulates and embassies to hasten the processing of these visa applications.

Last year, summer work travel participants under the J1 visa program dropped by 98% in Virginia and 95% across the United States, according to the Alliance for International Exchange. In Virginia, there were 116 summer work exchange students in 2020, compared with 4,621 in 2019.

Typically, these work exchange employees comprise about 12% of seasonal staff at the Doubletree by Hilton at Virginia Beach, Zirkle says. Some may find jobs at restaurants as well.

“It is a large part of the hotel and restaurant community,” he says. 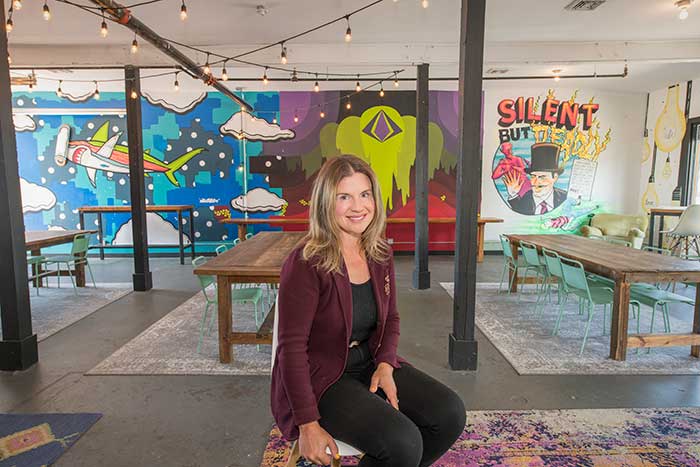 Kristina Chastain has been forced to turn down requests for private parties at her Virginia Beach restaurant, Esoteric, because she can’t find enough seasonal workers. Photo by Mark Rhodes

Kristina Chastain receives at least three calls a day from people asking to hold private events at her craft beer and food establishment, Esoteric, in Virginia Beach. But she’s had to turn them all down because she has only enough employees to keep the restaurant operating, not to host dining events in the eatery’s private space.

She’s in a rush to find much-needed seasonal help. As of late April, she only had one seasonal employee. Typically, she hires 10 to 15 employees to work during the summer months. Many are high school and college students.

However, Chastain says, “I think there’s a lot of money circulating right now. A lot of people got a lot of stimulus money [and] maybe there’s not that pressure to go and find work.”

Chastain isn’t the only restaurant owner sweating over the search for seasonal help. Some establishments have closed for several days a week due to lack of staff, while others are attempting to attract employees with novel incentives ranging from free meals to end-of-shift cocktails, says Stacey Shiflet, executive director of the Virginia Beach Restaurant Association.

Shiflet is promoting restaurant jobs left and right, including talking with public schools in the area and discussing employment opportunities as part of panel presentations.

As consumers gain increasing confidence to travel in the wake of the pandemic, it’s both a curse and a blessing for a hospitality industry that is struggling to find workers.

“We are seeing [business] pick up as people get their vaccinations,” Shiflet says. “They are comfortable going out and dining where they hadn’t been before. Guests are coming, and people are itching to get out and travel.”