This summer, more Americans than ever will load up their RVs and spend time out on the road. They’ll tour the nation’s great national parks, visit family and friends in faraway cities, and fill up social media with snaps of their #vanlife.

For many, it’ll quickly become a long-term way of life, especially now that innovative new Power Kits from EcoFlow are lowering the barrier to entry and making recreational vehicles and off-grid living accessible to just about anyone. Flexible, compact, and powerful, they’re designed to get everyone out on the road — and to stay out as long as they want.

By the middle of March 2020, Covid-19 had sent much of the world into quarantine. Planes grounded, offices emptied, life paused. But after months stuck inside, Americans began to seek out safe ways to travel, reconnect with missed loved ones, and take advantage of the mass transition to remote work. Driving was the only real option available, and with hotels out of the question, many flocked to recreational vehicles for their all-in-one convenience and safety.

Despite two months of production shut down, there were 430,412 RVs sold in 2020, a 6% increase over 2019. The number soared in 2021, with a record 507,000 RVs were sold in the United States, with a 34% year-over-year increase in units shipped. It wasn’t a fad, either, as production continued to ramp up going into the new year. Despite the supply chain crisis that slowed production across the board, North American factories produced more than 58,000 new RVs in October alone, which set another record.

Industry experts expect RV sales to surpass 600,000 units in 2022, and for good reason. Even as the pandemic recedes and emergency measures unwind, the conditions that inspired Americans to rediscover RVs will remain in place. First, housing prices have reached unprecedented heights. And second, there’s simply less need to own a house in one set location. By 2025, 25% of jobs are projected to be performed remotely, meaning that millions of Americans will never be tethered to a city for work or have to take onerous commutes to drab cubicles.

Instead, they’ll be free to turn the vast American horizon into their home office, a dream that EcoFlow’s new Power Kits can make a reality for just about anyone. There are already 25 million Americans that spend 3-4 weeks per year traveling in RVs, and 250,000 Americans that live off-grid all year round. That number is set to surge with this new source of power.

One of the appeals of RV travel is its simplicity. Pack what you need, get comfortable, and hit the road. Living off-grid, even more so — fewer possessions, less waste, more freedom. But prior to the EcoFlow Power Kits’ launch, those limitations have come with a cost.

If you’re off the grid but still want to live comfortably, you’ve got to find a power source, and the technology has long been clunky, inconvenient, and not all that kind of the environment. Up until now, it’s taken even seasoned experts hours upon hours to install a single power system to an RV or tiny house. For those without the technical prowess for self-installation, the process has been complicated, expensive, or otherwise inaccessible. And regardless of one’s expertise in installation, power towers have taken up a too-significant chunk of real estate inside the RV or portable structure, which tend to be 320 and 400 square feet, respectively.

EcoFlow Power Kits alleviate all of those pain points, and more. As compact modular power solutions, they serve as an eco-friendly, user-friendly electric energy operating system. This is essential, because the typical modular energy solution right now has dozens and dozens of individual modules, and the larger ones can reach up to 100 components. They make for a big wired mess in a tight space, putting drivers and their families in danger of sudden electrical fires.

The compact kits don’t skimp on power, because users can build out the ideal energy system by adding batteries and solar panels as needed. It connects to the EcoFlow Power Hub, the nerve center connecting all inputs and outputs. The hub is versatile, too — it’s the industry’s first five-in-one central power system that does the jobs of two Maximum Power Point Tracking (MPPT) Solar Chargers, one DC-DC Battery Charger with MPPT, one Inverter & Charger, and one Step-Down DC-DC Converter. It can handle up to 15kWh of EcoFlow LFP batteries, and an array of solar panels, and other add-ons.

Right from the start, the EcoFlow Power Kits offer users a choice between three different solar panels, the most powerful of which generates 400W. That can easily be multiplied, as the kits can handle a max input of 4,800W. The panels are also far easier to install than the industry standard, with an option that includes a strong adhesive that sticks right to the surface of an RV or off-grid house. It helps keep the power tool requirements to a minimum, which provides another easy access point for those new to van life and tiny homes. 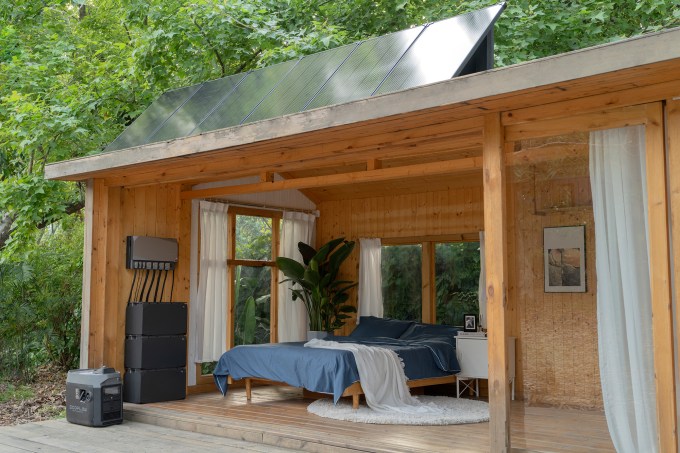 Between the batteries, Power Hub, and array of solar panels, there’s really no need for a grid ever again. The solar panels are fast to charge, so that wifi hotspot is never in danger of losing juice or making remote work difficult. Forget the green screen zoom backgrounds — with an EcoFlow Power Kit, the home office can be anywhere, with stunning vistas and snow-capped mountains as backdrops for meetings and FaceTime sessions.

The sheer simplicity of the plug-and-play set-up is mirrored by the controls available to Power Kit users. The entire system is intelligent yet fully customizable thanks to an app that allows users to manage and monitor the energy distribution and charging. It takes the guesswork out of preserving electricity for critical functions, ensuring that users have time to conserve and recharge.

Both the app and the Power Kit console also give off-grid pioneers eyes on EcoFlow’s AC/DC Smart Distribution Panel. The AC/DC Smart Distribution panel is the ultimate power-management device, ensuring circuit-level monitor and control of your power consumption. It can be connected up to 18 RV or home circuits — 12 DC circuits and 6 AC. Once it’s plugged in, users can monitor all 18 circuits and control six of the DC circuits — all via the EcoFlow app or the Power Kit Console.

What was once a complicated, expensive, niche way of life has caught the eye and interest of millions of Americans over the past few years. With the EcoFlow Power Kits, RV adventures and off-grid living are more accessible than ever. The open road awaits.