On Tuesday, August 2, a magical event was held at the Four Seasons in Mexico City. Disney presented the novelties of its parks in Florida and California as well as the new Disney Wish cruise ship.

In the presence of Jeff van Langeveld, International Vice President of Sales and Marketing for Disney Destinations, along with other key figures such as Cinthia Douglas, Director of Sales and Marketing for Disney Destinations for Latin America; Alejandro Flores, Senior Manager of Disney Destinations for Mexico; Terry Brinkoetter, Director of Public Relations for Walt Disney World Resort; Norma Elena Pérez, Public Relations Manager of the Disneyland Resort and selected travel advisors, Disney introduced new attractions and shows at Disneyland and Walt Disney World, as well as the amenities of its latest cruise offering.

“It was terrific the first trip,” said van Langeveld in an interview with TravelPulse. The Disney executive added that he had already made six trips this year. “Everything is open now, and we are trying to get there, meet with our clients and the teams, and reconnect with them. This is my first time back in Mexico for business in almost three years. Feels very special to be back and have meetings with our clients.”

The 50th anniversary of Walt Disney World Resort kicked off in October 2021, and Disney announced it would be an 18-month celebration. “We have added so much to the park. When this celebration started, many of the borders were still closed, and people could not travel and experience the parks,” said van Langeveld. “So, when most countries opened in November last year, they started arriving and living the magic. There are still eight months left, and we want to make sure that the people have the opportunity to experience and see it before it is over.”

“It varies by market, but we have a good response from the Latin American market, and the results are awe-inspiring,” says Jeff van Langefeld

“So we have seen a great response from our key markets, which tend to be the biggest ones like Brazil, Mexico, Canada, the U.K., and the whole of Europe. All those markets are starting to return, and we are happy with the response,” Langeveld said. “Still, from a Latin America standpoint, we have been so impressed with the attendance, visitation, and business that we continue to drive from this region many throughout the pandemic. It varies by market, but we have a good response from the Latin American market, and the results are awe-inspiring. It is a significant market for Disney Cruise Line and Disney Parks.”

As for travel advisors, the Disney executive said: “Travel agents are an essential part of our business. They are partners and help us to deliver the magic. They are substantial in that process. Suppose it is the first trip to Disneyland or Disney World or Disney Cruise Line, for example. In that case, they need to work on air, hotel, and many other aspects of their trip, and the travel agents are critical in helping them through that process. They are essential partners.” 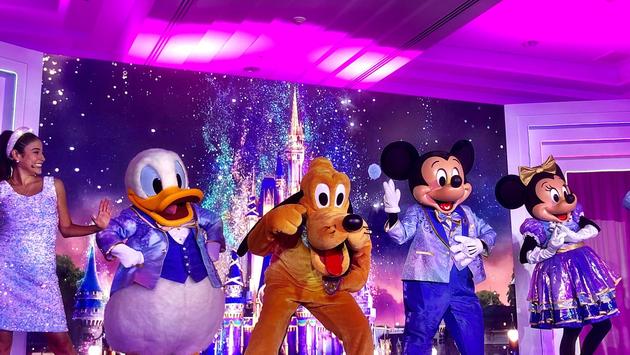 We have been so impressed with the attendance, visitation, and business that we continue to drive from the Latin America region.

“The celebrations are an excellent way for us to invite those who have been in the past, return and relieve those memories, and enjoy and celebrate these essential anniversaries with us,” remarked van Langeveld.

“The domestic market is our largest source; however, the international market makes up a sizable portion. We are very excited that those markets are now open and the people are starting to travel again. But Canada and U.S. are vital, the U.S. has been the biggest market, of course, and Canada is one of the top five. Multiple days are routine visits for domestic and international. We encourage people to take time and visit the park for more than one day,” he said.

And because people love magic, Disney is prepared. “The new Mickey and Minnie attraction is going well with excellent feedback from our guests, and it should be open at Disneyland as well on 2023 and would be a big plus attraction at Disneyland Park,” van Langeveld concluded.

For the latest travel news, updates and deals, be sure to subscribe to the daily TravelPulse newsletter here.