In New Orleans, all roads lead to a restaurant. But the fact that a restaurant meal continues to be something nearly a quarter of New Orleanians living in poverty can’t access is often obscured from mainstream awareness. New Orleans stands as one of the top cities contending with food insecurity in the United States, a particularly jarring contrast to its reputation as one of the best food cities in the world.

Numerous food banks, nonprofits, and community fridges supply sustenance to food-insecure New Orleanians (as of this writing, New Orleans Community Fridges operates at least 16 refrigerators). Still, these provide necessary goods and aim to fulfill a basic human right, rather than an experience most people want. Hence the inspiration behind Crescent City Cafe, a pop-up restaurant that gives food-insecure residents in New Orleans the opportunity to dine with dignity in a full-service restaurant experience.

“When people come in, we don’t know their circumstances, but we are serving them because they are here,” says Adelle Bergman, executive director of Crescent City Cafe. “We are giving people the ability to belong, matter, and have a sense of being part of a community,” Bergman says.

The cafe, founded in 2009, serves breakfast on the first and third Saturday of each month at Rayne Memorial Methodist Church on St. Charles Avenue. The church’s commercial kitchen and reception area serve as a simulated restaurant run by volunteers, who do it all from preparing the meals to seating and serving the guests. It serves plates that would be expected at a favorite local breakfast spot — a recent menu included cheddar bacon ranch grits and lemon pancakes. While the menu changes each week, offering different sweet and savory breakfast options, one thing is consistent: It’s always served on linen tables with a sweet mason jar of flowers, silverware, and bottomless juice and chocolate milk.

Volunteers do more than fill drink cups or scramble eggs; they’re also there to help build community at the pop-ups, connecting with guests and fostering an inviting space. “Food insecurity is a temporary condition; it’s not a part of someone’s identity,” says Bergman. “Our volunteers cycle through and eat with guests; that way we create friendships while also educating volunteers that these are just people with different circumstances.” 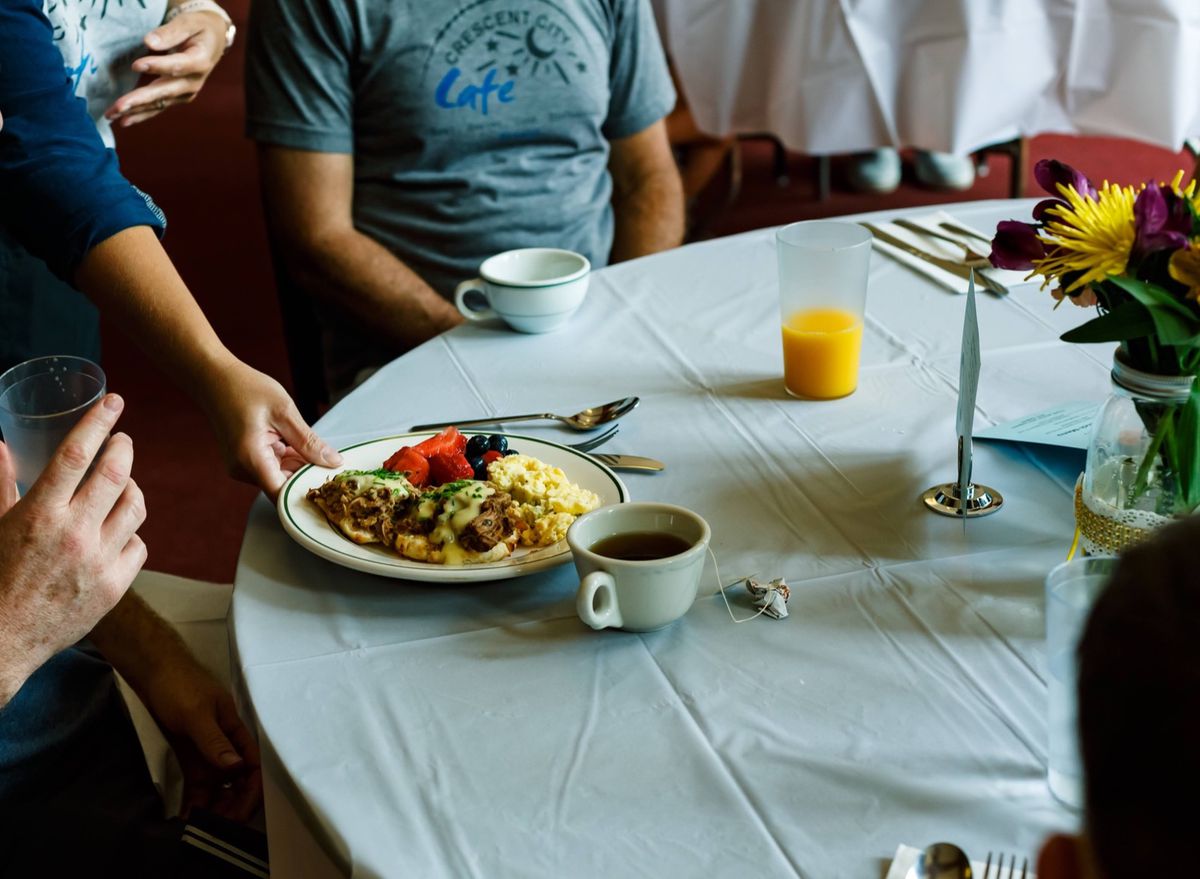 The faces of food insecurity range; it is not defined as one type of person or circumstance. Crescent City Cafe might see as many as 120 people come through on a given Saturday morning. Guests include the elderly, college students, families, unhoused people, housed people, individuals who had to choose between buying medication or paying for food, and those who simply want the company. In some circumstances, guests have included neighbors who stumbled in for a meal and left as donors, while other guests have later found themselves in different circumstances and returned to the cafe as volunteers.

Bergman notes that food security can affect anyone, which is partly why, after 13 years, Crescent City Cafe has announced plans to expand into a pay-what-you-can restaurant with a permanent location. “Because we are in a church, people assume there is still a barrier to entry. People have to see for themselves that we are different from a soup kitchen.” 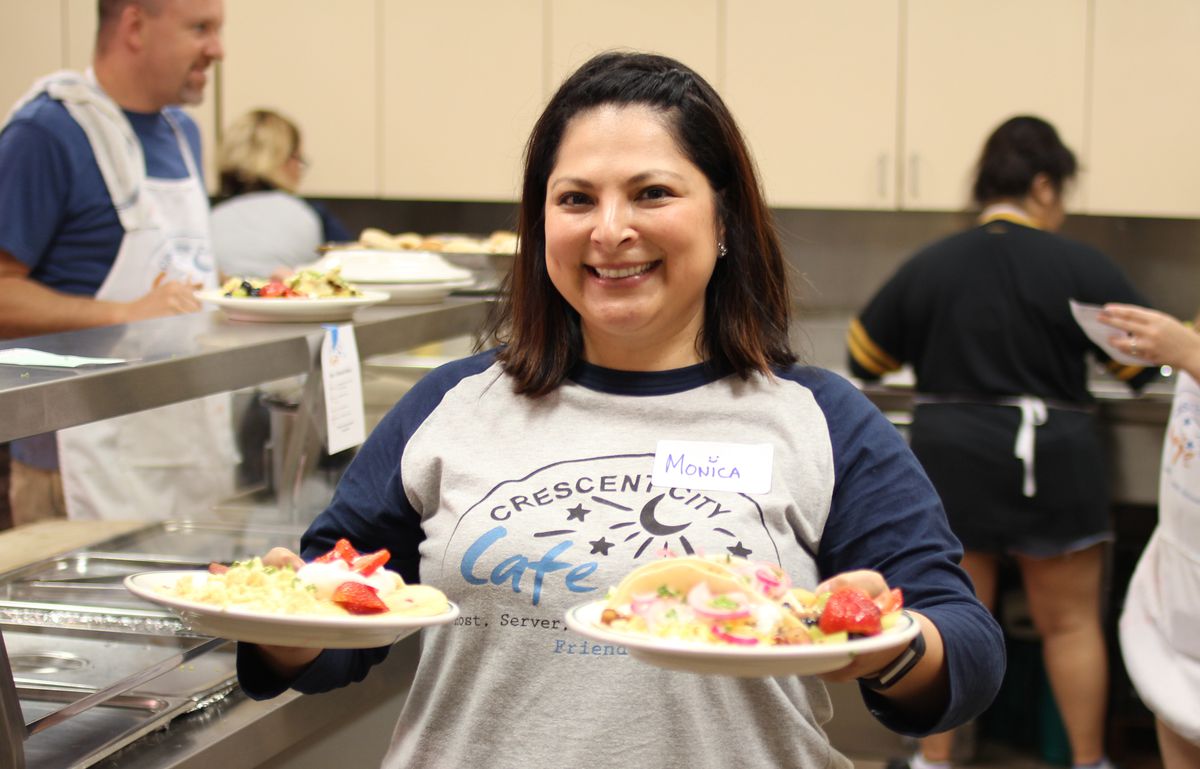 The plan is to serve breakfast and lunch daily to guests, regardless of their ability to pay, in a space where non-paying guests dine alongside paying customers. The restaurant will be run by staff members and volunteers, giving opportunities for non-paying guests to also serve as volunteers, which Bergman says many guests are keen on. It will join dozens of pay-what-you-can community cafes in the U.S., including the Jon Bon Jovi Soul Kitchen in New Jersey, SAME Cafe (So All May Eat) in Denver, and FARM (Feed All Regardless of Means) in North Carolina.

Expansion into the pay-what-you-can model will take fundraising — overhead expenses can’t be sustained by paying customers alone since it’s hard to predict what people will be paying. Bergman adds, though, that ultimately, she doesn’t want the restaurant to be breaking even with paying customers since the expectation is that people can come in and pay nothing.

For those advocates and volunteers powering Crescent City Cafe, meals — and the community connection gained through them — are as much a necessity as the food itself. “Even though we have evolved a bit in the past 13 years, that mission has remained the same,” says Bergman. “We just want to share a meal, create community, and make connections — again, with dignity and love. Food is really just our excuse for creating community.”

Crescent City Café serves breakfast from 8 to 9:30 a.m. to those in need on the first and third Saturday of each month at Rayne Memorial United Methodist Church. To learn more about volunteering or donating to Crescent City Cafe, visit https://crescentcitycafe.com. 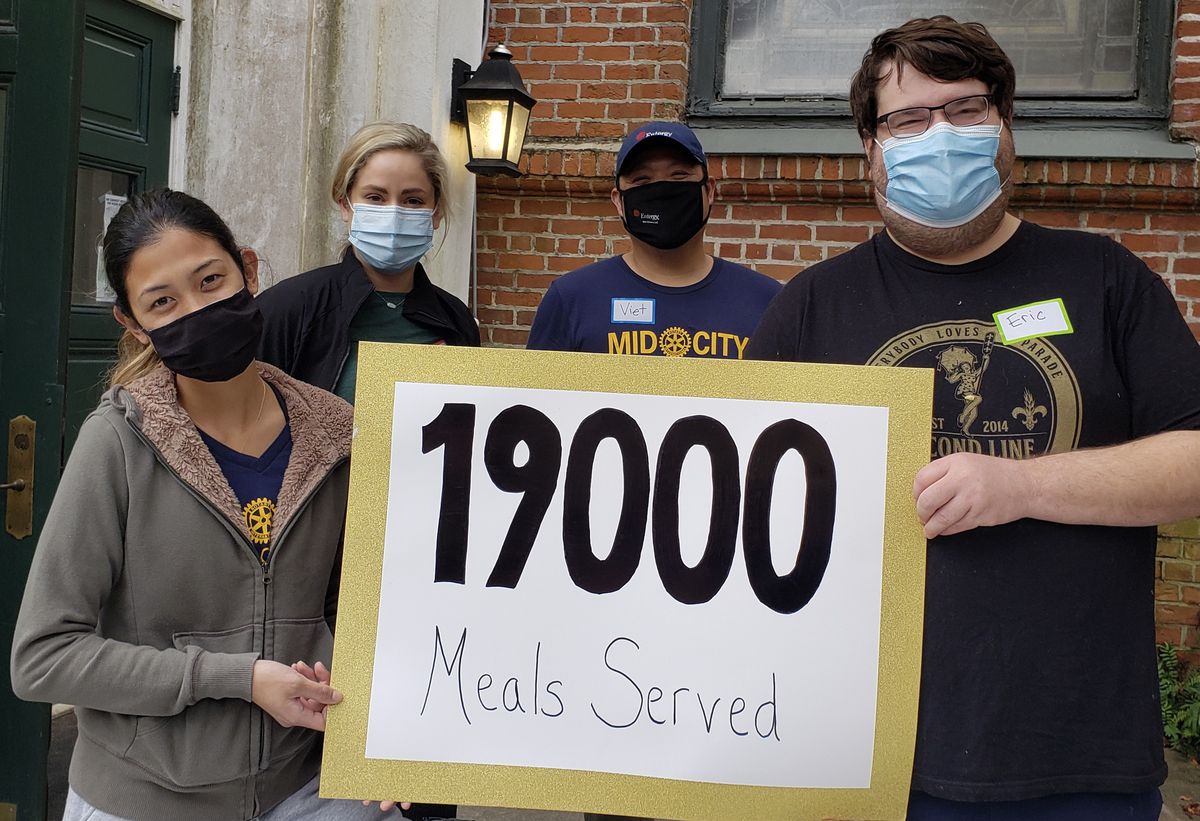