County Land Commissioner Mark “Chip” Lohmeier explained to the Hubbard County Board this week that this is “the first step in getting regional designation,” which in turn, opens up funding opportunities for park development.

In the meantime, Lohmeier said work continues on the master plan.

Located at the former Val Chatel ski resort, the 352-acre property includes the entire shoreline of Deep Lake and a smaller, unnamed lake.

This preliminary concept for Hubbard County’s newest park was shared with county commissioners this week. The county hired SRF Consulting Group, Inc. of Minneapolis to develop a master plan for the new county park.

Lohmeier anticipates the master plan will be submitted to the GMRPTC later this month. “They will then score that and grade it,” he said.

In August 2021, the county hired SRF Consulting Group, Inc. of Minneapolis to create the plan. 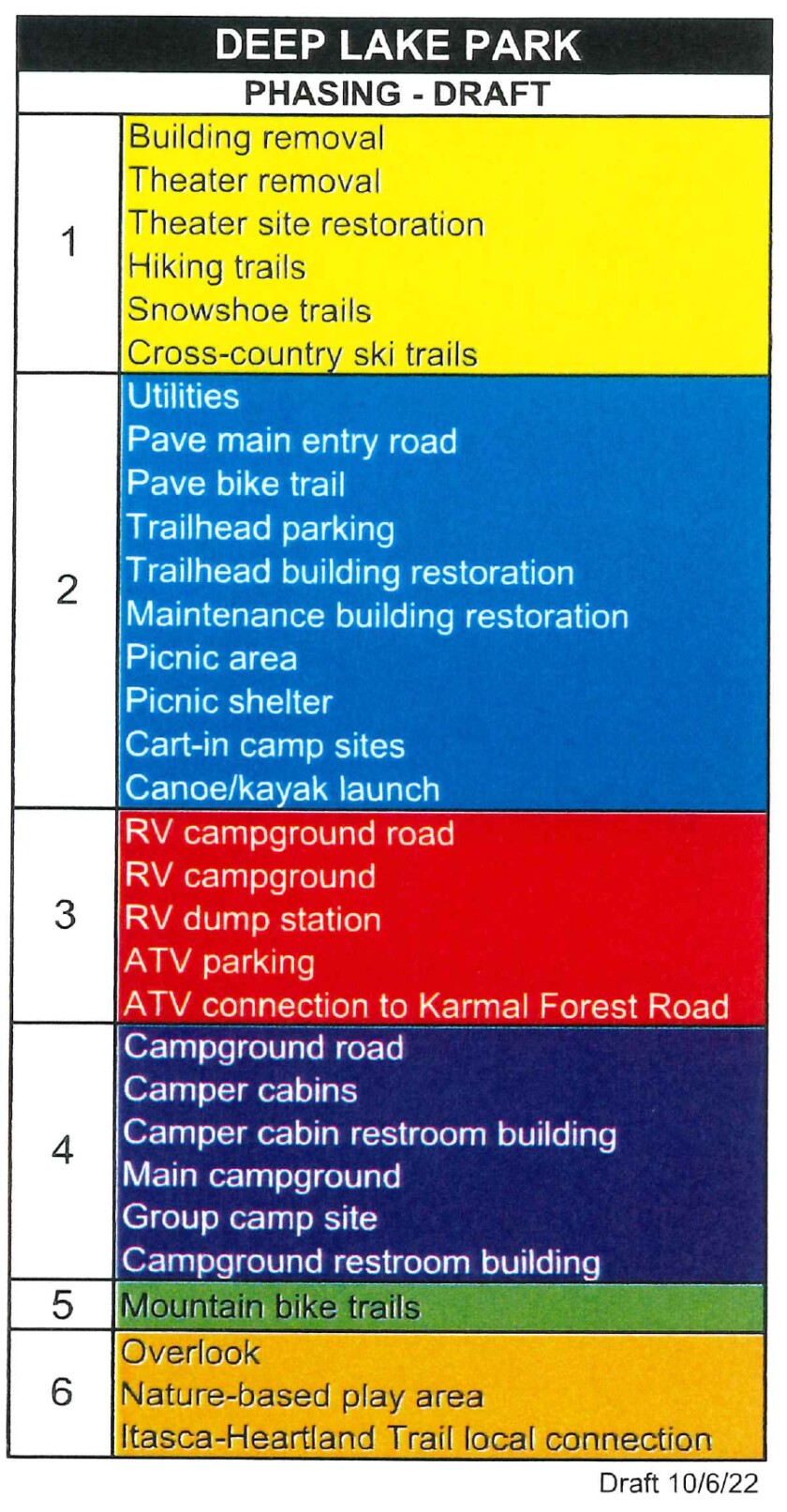 Deep Lake Park’s development has been divided into six phases, which could take up to 10 years to complete, depending upon funding.

Park development has been divided into six phases. The first step is removing existing buildings and creating roughly 3.5 miles of hiking, snowshoe and cross-country ski trails, Lohmeier said. “Most of those are already there,” he said. “They’re going to need a little tweaking” and will need to connect with existing trails outside of the park.

Phase 2 is installing utilities, paving the main entry road and bicycle trail, along with creating the trailhead parking area.

Lohmeier said one of the existing buildings will be repurposed into a warming shed for cross-country skiers and snowshoers. It will have bathrooms in it. “If we can find a concessionaire for a rental shop for canoes, kayaks, mountain bikes, paddleboards, that sort of thing, that would be housed in that building,” he said.

The six cart-in campsites are basically a leveled and cleared pad, with a fire ring, picnic table and a privy, he noted. “Those are scattered around the lake.”

Lohmeier said the next phase is constructing the second campground, located at the bottom of the old Viking Theater area. Four camper cabins, two restroom buildings and a group campsite are proposed.

The precise number of campsites is not yet determined, but Lohmeier estimated about 20 in the upper RV camping area and 15 to 20 in the lower campground.

Mountain bike trails would be built during Phase 5.

“The last phase would be creating an overlook on the lake and a nature-based play area down by the picnic area or day-use area,” Lohmeier said, plus a roughly 3.5-mile, paved trail would lead to the Itasca-Heartland Connection Trail.

County commissioner Tom Krueger recommended installing full electric-sewer hookups for the RV sites rather than a dump station. A combination of both works, too, he suggested.

“That certainly is a possibility,” Lohmeier replied, saying they could look into it.

County commissioner Dan Stacey expressed concern about the cost of building full hookups and maintaining them. He preferred a mix.

Lohmeier predicts a 10-year span before the park is fully finished.