Airlines are struggling to get back into the skies following two years of travel restrictions, leaving passengers facing a frustrating barrage of delays and cancellations.

But when the disruption clears, the invisible impact of the pandemic will hang over the industry for years to come, as the world’s biggest carriers work to deleverage their balance sheets from billions of dollars in debt accumulated during the crisis.

Ten of the leading airlines in the US and Europe have built up $193bn in gross debt between them over two years, up from $109bn in 2019.

“This accumulation of debt is huge. There is no quick fix to this particular problem,” said Izabela Listowska, a credit analyst at S&P Global Ratings.

Some airlines with weaker balance sheets have already stumbled. Earlier this month Scandinavian airline SAS filed for bankruptcy protection in the US to allow it to restructure its finances, following rival Norwegian, which went through bankruptcy and debt restructuring in 2020 and 2021.

For now, big airlines are in a much stronger position.

The major carriers in the US and Europe are insulated by a wall of cash built up from a combination of shareholders, debt markets and in many cases national governments.

In the US, some have put up their frequent flyer programmes as collateral to raise money, while in Europe Lufthansa received a €9bn bailout from the German government, which it has already paid off.

“A lot of the cash that was raised through debt is sitting on the balance sheets,” said Jonathan Root, a senior vice-president at rating agency Moody’s. 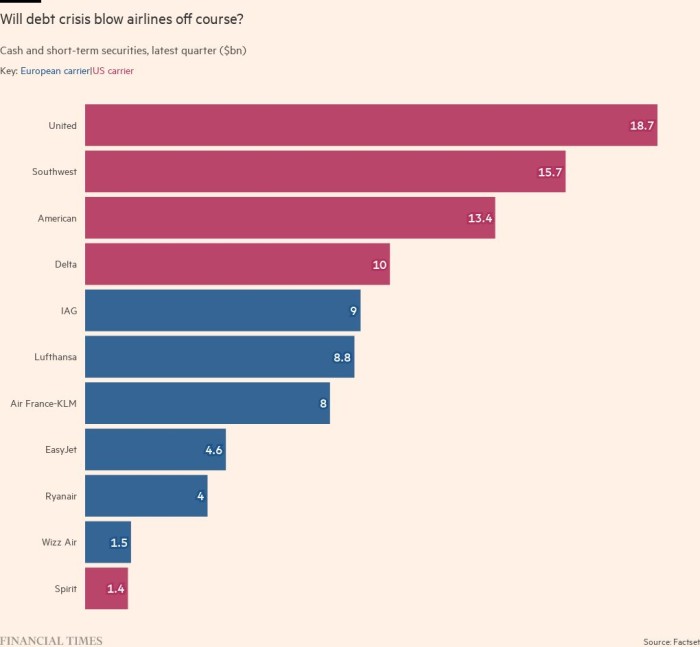 The industry has also switched from raising cash for survival to worrying about how to get enough planes in the air to meet demand, meaning cash is flowing back. Some airlines, notably low-cost carriers Spirit, Ryanair and Wizz Air, will fly more passengers this summer than in the same period in 2019.

This means industry-wide losses are forecast to fall to about $10bn this year, with profitability possible in 2023, said Marie Owens Thomsen, chief economist at the International Air Transport Association, Iata. This represents an “inflection point where we move to fixing balance sheets”, she said.

But just as one crisis appears nearly over with the removal of most travel restrictions, the outlook for the industry has darkened again.

Shares in major airlines have tumbled this year: the Bloomberg World Airlines Index is down 25 per cent since February. IAG is trading at around its lowest levels since autumn 2020, while easyJet has plumbed 10-year lows.

As well as the cost of travel disruption, including compensation payouts, airlines are exposed to the worsening economic outlook and worries over inflation that could curb consumer spending, although executives say there are no signs demand for flying has begun to weaken yet.

Potentially even more worrying is the rise in the price of oil, which can account for as much as a third of airline costs.

So far, airlines have been able to pass these on to customers through higher ticket prices, S&P’s Listowska said, but European airlines that hedge their future fuel requirements will probably face higher costs when these run out in 2023. 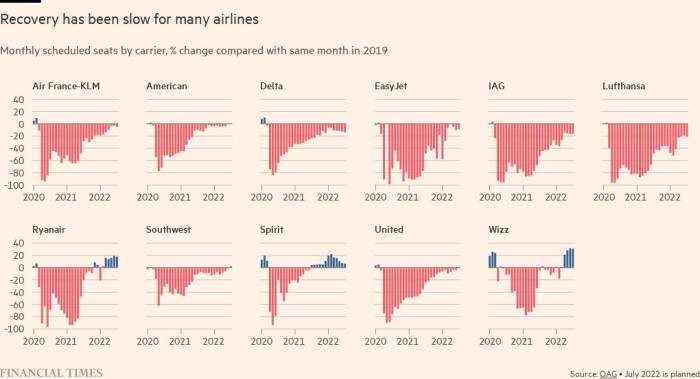 “No matter what the economy throws at them . . . what is most important is [whether] these companies can maintain this cash they are holding,” said Moody’s Root.

Much will depend on whether the robust demand for travel this summer is simply the release of two-years of pent-up demand, as Heathrow airport believes, or the start of a broad recovery in travel, including business class.

At least one bright spot from inflation is the fact it will erode the overall debt hanging over the industry, and make the cost of servicing it more affordable.

“I think the debt levels are not necessarily sustainable, but under current circumstances they could perhaps be considered affordable. And that’s a saving grace for our industry,” said Iata’s Owens Thomsen.