Welcome to Night Market, an exploration of these casual, open-air bazaars where food, music, and retail vendors all coalesce to celebrate Asian street food and culture. Check out the rest of our coverage to discover mouth-watering recipes, time-honored traditions, the true meaning of community, and how to make new night market memories of your own.

Asia’s night markets exemplify the true meaning of organized chaos. Just ask any traveler strolling down a packed street at primetime for the first time—all the crowds, humidity, and haggling can certainly make a new visitor feel like they’re in a scene from The Human Centipede.

Yet, it’s an experience that’s magnetic again and again. Night markets are a powerhouse potpourri of delicious smells, bright colors, and buzzing sounds—and they’re a fascinating window into a destination’s particular culture and history. These hubbub attractions are renowned for street food, shopping, and live entertainment.

What started in China during medieval times spread to other countries like Thailand and Taiwan, and especially grew after World War II. In the ’80s and ’90s, the bazaars became less like traditional wet markets and more bent on commerce (think pirated movies and luxury knockoffs, plus the typical street food). Thus, younger and more international crowds started being lured in and there you have it: a nighttime hullabaloo.

These days, night markets across Asia—and other places around the world—are diverse cultural melting pots blending old and new, foreign and local, into a truly global cultural phenomenon. Here are some of the world’s most captivating Asian night markets.

Follow the red lantern road to the Nanluoguxiang night market in Beijing. | Fotokon/Shutterstock

China, believed to be the ancestral home of the night market thanks to a sudden lift of rules on nighttime activity during the Tang dynasty, China is still where you’ll still find plenty of happening ones. The capital city of Beijing lays claim to busy, flashy night markets like Nanluoguxiang, a lane (known locally as a hutong) lined with teeny, old-world shops and restaurants. Or there’s Shuang’an, where vendors wheel and deal everything from fresh seafood on ice to tripe.

A centerpiece of trade is xiaochi, or “small eats” in Mandarin. These light meals, like soups or dumplings and rice dishes, are derived from traditional banquet dishes and served for gobbling to-go or at folding tables. 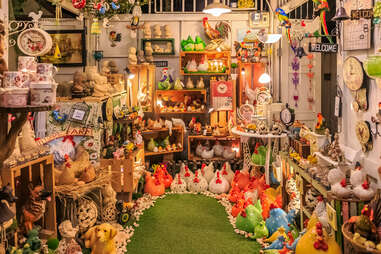 Because you can’t go home without a painted chicken from Thailand. | Tooykrub/Shutterstock

Thailand is synonymous with some of the world’s loudest and showiest night bazaars. Bangkok’s Patpong, a notorious night-market-cum-red-light-district, gets its name from the Chinese family who first purchased the property. In the ’60s, it proliferated with bars and restaurants as a so-called “R&R stop” for U.S. military officers stationed during the Vietnam War. These days, it’s a pretty touristy market with counterfeits and souvenirs you can get for half the price in other places.

Thailand’s nocturnal markets range from more traditional walking streets like those in places like Chiang Mai and Phuket to modern concepts like the Greenway Market in Hat Yai or Cicada in Hua Hin, where gourmet food and handmade pieces by young artists are respective focal points. Overall, you’ll get in-your-face grill smoke, loud twangy music, and shopping ranging from glittery Muay Thai shorts to handmade soaps and iPhone cases.

The motherlode of all markets, though, will always be Chatuchak, the world’s largest open-air weekend market in Bangkok. “You see it, you buy it—because you’ll never find it again” is the motto in this labyrinthine indoor-outdoor maze of stalls selling anything and everything you can think of, including furniture, pets, second-hand clothing, and more. It’s mostly a daytime affair, except for the Friday Night Market, which is lovely for bargain hunting with a cool breeze.

For an under-the-radar night market experience, look out for what’s known as a temple fair. These celebrations held for annual Buddhist holidays usually last for a few days up to a couple of weeks and combine street food, shopping, and carnival rides against the backdrop of sparkling shrines and pagodas.

Everything to Know About Visiting Thailand Right Now

This destination is so Thai-spicy hot right now. 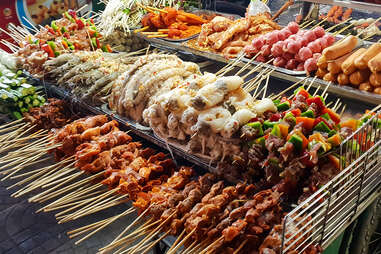 In Kuala Lumpur, anything on a stick goes. | Kwan1st/Shutterstock

In Malaysia (but also Indonesia and Singapore, too), night markets are known as pasar malam. When dusk falls, these typically small, open-air bazaars fill up with a smorgasbord of stalls selling clothes, home-cooked meals, and decorations, to predominantly neighborhood crowds.

Pasar malam often takes place at the same time every week, allowing vendors to build a circuit across different locations. In the capital Kuala Lumpur, visitors can check out the food cart-heavy Happy Garden on Saturday nights and the Connaught Market on Thursday nights. 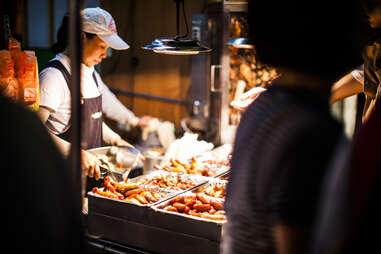 The Shilin Night Market has been a foodie heaven since 1899. | Baiterek Media/Shutterstock

Taiwan may just be Asia’s epicenter of night market culture, with more than 700 night markets packed onto a small island about the same size as Maryland.

Night markets in Taiwan really took off, especially with foreign workers, thanks to all the business after the war. The capital Taipei’s night markets are diverse and can be quite monumental, like the popular Shilin (dating back to 1899!), a foodie hotspot with over 500 xiaochi vendors. More controversial is the half-century-old Huaxi market hall, a former red light district turned xiaochi haven (sometimes called Snake Alley for reptilian dishes once served there).

This Tiny, but Mighty, Asian Island Is Seriously Under-Hyped 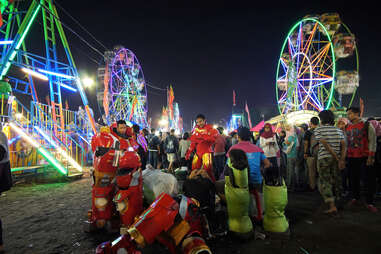 The Yogyakarta night market is like an Indonesian amusement park. | haryanta.p/Shutterstock

Many traditional night markets are held on Islamic holidays and observances, like the annual Sekaten festival celebrating the Prophet Muhammad’s birthday. In Javanese cities like Yogyakarta and Surakarta, a week-long celebratory night market features parades in ceremonial attire and amusement park rides, plus all kinds of sweets and local snacks. 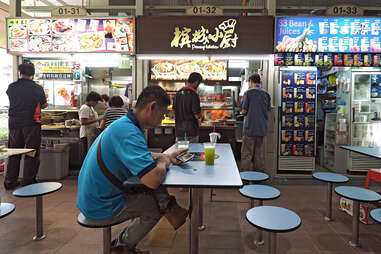 Singapore’s night market vibes come in the form of hawker centers—sometimes described as “community dining rooms” bringing all stripes of people together.

Contrasting the city-state’s glistening megamalls, these pseudo-food courts (among the most famous are the Adam Road Food Centre and Amoy Street Centre) are all about plastic bowls, tissue rolls, and waggly stools that test your posture while digging into hearty staples like Hokkien noodles and laksa. There are more than 110 hawker centers on the island, and some of them have also been showered with gourmand awards—be prepared for potential queues!

Food is the focus, but hawker centers will often also feature stalls selling curio like clothes, souvenirs, and electronics. More straightforward night markets, with additional shopping and sit-down greasy spoons, can be found near the city center predominantly in enclaves such as Chinatown, Little India, and the Arab Quarter.

This multicultural food heaven is setting an example for a sustainable future. 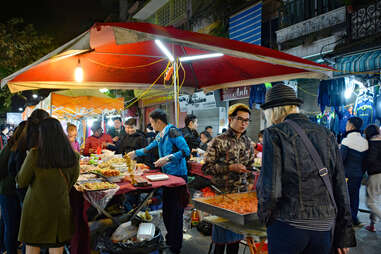 The Hanoi Old Quarter is one of Vietnam’s most famous night markets. | Dragoncello/Shutterstock

Strung up in glowing lights and lanterns, Vietnam’s night markets are known for their bright hues. Luminosity leads the way to canopied tents of vendors folding and frying snacks, and locals masterfully bargaining over colorful jewelry and beautiful weaves.

Many Vietnamese night markets are laid out as walking streets, often along beachy boardwalks or in historic city neighborhoods. Perhaps the most famous is the night market in Hanoi’s Old Quarter, but cities such as Nha Trang, Ha Long, Hoi An, and Phu Quoc offer sea breeze and coastal scenery along with ample perusing. 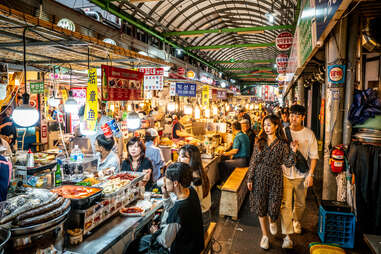 Get ready for some spicy gochujang in South Korea. | Keitma/Shutterstock

Night markets in South Korea are typically tucked into tiny alleys or spread al fresco along big sidewalks. Squeezing through with a bottle of soju may be the only way to overcome the social anxiety of milling bodies on a busy night.

Night markets are an important element of Seoul’s city-never-sleeps identity, as is the famous clothing market Dongdaemun. Opened in 1905, the market was destroyed during the Korean War and built again afterwards into a multi-story, mall-like industrial building for mostly wholesale buyers (dusty fabrics and steel staircases are something of a shopping hazard).

Dongdaemun, along with many of Seoul’s night markets like Namdaemun, opens around dinnertime and closes at the same time as many nightclubs do—in the wee hours around 5 am.

Everything You Need to Know Before Your First Trip to Seoul

Should you leave a tip? Drink the tap water? Stay in the touristy neighborhoods? We got you. 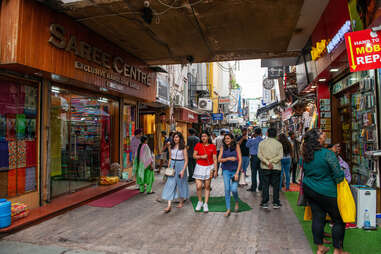 India’s centuries-old night bazaars are lovely bedlam—bodies milling about, blaring Hindi pop music, hot oil flying from karahi pots, and sellers seeking out the attention of buyers by any means possible. India’s incredible cultural, ethnic, and language diversity means that each night market’s characteristics can vary wildly, depending on where you are, but clothes, accessories, spices, and a plethora of local snacks will usually be the standard offer.

In New Delhi, the bustling Mangal Bazaar and Buddh Bazar Mandawali are typical night markets bursting at the seams of tiny streets. These boast endless stands of bold fabrics and fresh produce, plus narrow shops for peeking in and finding unexpected treasures. The Khan Market, meanwhile, runs more upscale and is where you’ll find long-lasting gifts and souvenirs.

Many night bazaars across the country only come alive around 9 pm and function for different kinds of commerce during the day. A bit off the beaten track in Indore is the Sarafa Bazaar, a sprawling jewelry market by day and outdoor food court by night. Meanwhile, ​​the Manek Chowk market in Ahmedabad changes hands from vegetable sellers in the morning to a bullion market for precious metals in the afternoon and a street-food hotspot in the evening.

Barbara Woolsey is a Canadian journalist based in Berlin, formerly Bangkok, whose travels span over 40 countries. See more of her adventures and storytelling on Facebook and Instagram.