The great big outdoors is both a playground and, increasingly, an opportunity to participate in conservation work. These luxe wilderness lodges have teamed up with research institutions studying their diverse environments to both advance scientific work and allow interested travelers, individuals and families, pitch in. Think of it as adventures with benefits.

The private deck of a family suite at &Beyond Benguerra, a lodge on an island in Mozambique.

Where: &Beyond Benguerra, a 13-room barefoot ­luxury lodge on Benguerra Island, in the Indian Ocean’s Bazaruto Archipelago. Activity: With the conservation pioneer’s Impact Journeys, which cater to the philanthropically minded (and families seeking educational trips), you’ll accompany a scientist from South Africa’s Oceanographic Research Institute on two half-day expeditions to tag giant trevally and grey reef sharks, which are linked to coral health. Takeaway: Learn about the effects of climate change on fragile reef ecosystems. (Built-in extras: sailing on a traditional dhow, swimming with horses, dining on Portuguese-influenced seafood under the stars.)

Where: The five-bedroom luxury Sheldon Chalet, just 10 miles from the snowcapped summit of Denali, North America’s highest peak. Activity: The magnificent surrounding Ruth Glacier has been receding for years, exposing unknown plants and flowers (and some thought to be extinct) and miraculously attracting birds. Come 2023, two to four guests will be able to help fund and participate in the study of this flora with scientists from the University of Alaska. Takeaway: You’ll have assisted research on the impact of climate change on Denali National Park. Plus the exhilaration of snowshoeing, trekking, or backcountry-skiing the glacier by day, aurora viewing by night. As a recent guest explained, it’s “an exponential avalanche of wow!” 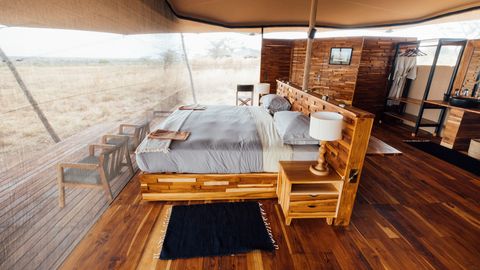 Pelorus, a bespoke adventure company founded by two former British Army captains, now adds penguin and whale research to its Antarctic yacht expeditions. Visit rookeries to gather population data and assist a marine ecologist in video-tagging whales (and track them when you get home).

This story appears in the October 2022 issue of Town & Country. SUBSCRIBE NOW