Mini-camper makers have been leaving behind the time-tested but limiting bench-bed/driver-side kitchen floor plan to experiment with layouts that feel almost as roomy and functional as large campers based on full-size vans. The Vanderer (plus e-Vanderer) and Ventje are two recent additions with particularly homey floor plans. Dutch newcomer Amstervan has put its own spin on the mini-camper, laying things out in a way that invites the outdoors in. The company compares its dual-lounger layout to a cozy coffee shop, but it gives us more of a poolside cabana vibe, especially when looking at wood furnishings reminiscent of the bamboo or rattan construction you’d usually find on a poolside deck or tiki bar.

One of the reasons the VW California-style folding rear bench/bed floor plan persists is that it quite efficiently squeezes four or five people into a modest-sized van, both during the ride and overnight. More creative floor plans often entail removing legal drive seats in the rear to create an open, lounge-like camper space. Thus is the case with the Amstervan, which seats only two on the ride to camp while sleeping two as standard or four optionally.

But the rear bench-free space isn’t frittered away. Amstervan is a collaboration between camper dealership Campers.EU, designer Manon de Beer and furniture maker Tom Kooijker, and it clearly benefits from having a designer’s eyes and woodworker’s hands on board.

Cutting out the rear van bench freed the Amstervan team to fully reimagine the living area floor plan in an innovative way. It switched the kitchen over to the passenger side, similar to a large camper van, dedicating the driver side to a unique form of lounge. The two cushioned dining seats are split by a folding multi-leaf table mounted to the wall.

Amstervan aims to get van lifers to relax a little more, creating a two-person floor plan with lounge chairs

The frontmost bench seat stretches nearly the full width of the van and becomes a 120-cm-long (47-in) side-facing lounge chair by simply dropping a cushion in as a seat back. The rear bench does not have enough permanent length to be a side-facing lounge chair on its own, but add the removable foot extension panel and matching cushion and it stretches out to 110-cm (43-in) “kick back and relax” length. The table then works as a handy side table between the two.

The front lounge seat faces the side door, while the rear lounger is located near the rear doors. So long as the immediate outdoors isn’t fraught with horizontal rain or swarming mosquitoes, Amstervan lifers can pop open all the doors and enjoy a double-chair lounge area with plenty of fresh air, views of the greater surrounds and full sun protection. 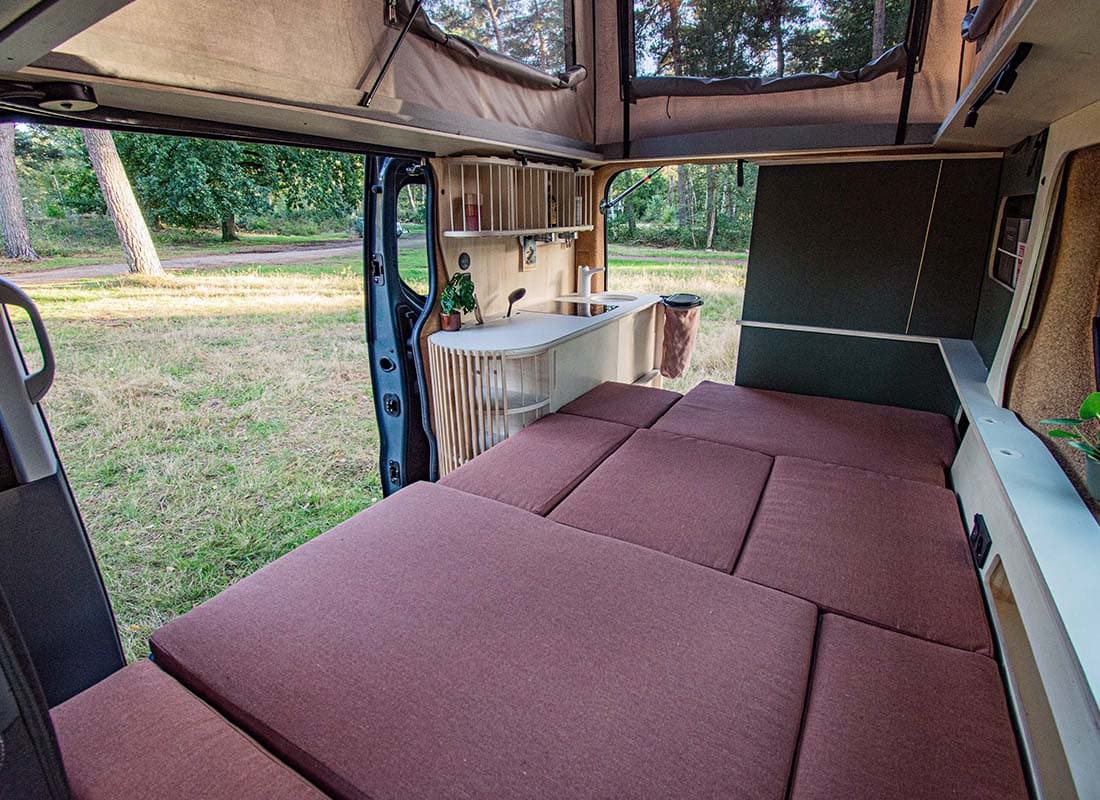 At bedtime, the table drops down to become part of the bed platform, and a few more platform panels and cushions fill in to transform the dual loungers into a 120 x 200-cm (47 x 79-in) double bed. Since the Amstervan only seats two, its standard pop-top is designed primarily for increasing headroom, but buyers looking for two more berths can add the optional 135 x 195-cm (53 x 77-in) roof bed. The sleeper roof sounds like a good option for anyone who’d prefer to have two separate and permanent camper spaces: a downstairs living area and an upstairs bedroom.

Not only does Amstervan focus on sustainable construction materials like recycled upholstery content and insulation made out of recycled denim and wine cork, it leans on battery power instead of LPG for its camping equipment. The 100-Ah GreenPower 12V AGM battery supplies the LED lighting, 50-L Dometic fridge/freezer, induction cooktop and 350-W heater. The battery easily charges during driving via the vehicle alternator or shore power hookup. 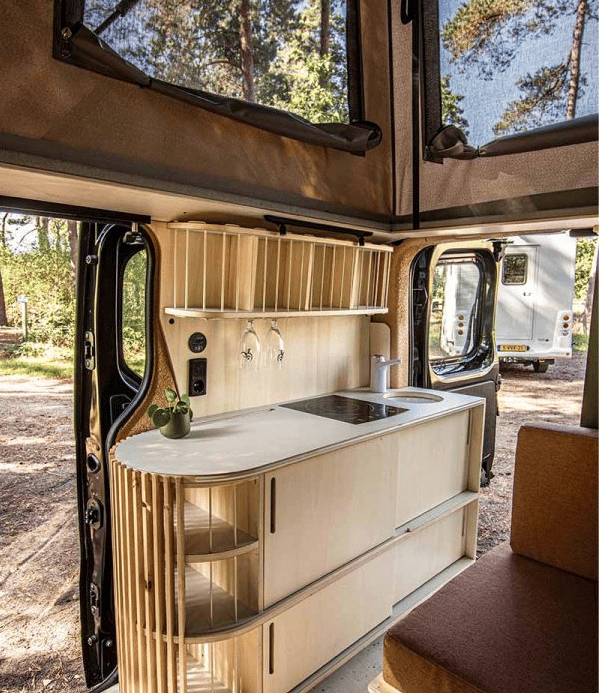 Amstervan owners will probably want to store the wine glasses somewhere safer during the drive, but they look nice dangling there at camp

The voluminous, broad-shouldered Renault Trafic van that serves as the base of the Amstervan brings plenty of cabin space, enabling the van to offer some creative and capable storage solutions. A large under-seat compartment inside the front lounger can store three 20-L crates with room to spare. The floating refrigerator console includes a lower storage drawer sized for two 17-L crates and does not extend all the way to the floor, leaving floor space below for longer items like oars or folded outdoor furniture. The kitchen area includes several cabinets, along with its skeletal shelves. Amstervan tacks on coat hooks and hangers for keeping jackets and other clothing organized.

Amstervan was up for the same sustainability award as the GoCamp ebike camper at this month’s Camping and Caravan show in Utrecht, Netherlands. The pictured model is a pre-production van, and the camper has not yet been added to Campers.EU’s online stock list. A recent YouTube post from the camper dealership says prices will start at €51,250 (approx. US$50,650) before taxes, which becomes €74,000 (US$73,125) in the Netherlands after BPM private motor vehicle tax and VAT are added on. Campers.EU also offers the Amstervan as a rental for €140/day.

The 499-cm (196-in) Amstervan comes built on a brand-new 2022/23 Renault Trafic with buyer’s selection of DCi engine ranging between 109 and 168 hp. Options include a storage compartment with portable toilet, outdoor shower, and an off-grid electrical system with lithium battery, solar charging and an inverter.