The all-new Rangeline camper van opens a new chapter in an Airstream camper van story that’s long been set in extortionately expensive territory. The Ram Promaster camper isn’t quite the dirt-cheap adventure van many free-spirited Americans pine for, but it does bring Airstream van pricing tumbling down. With a versatile camp/carry floor plan and an off-grid electric/gasoline power platform that eliminates the need for propane, the Rangeline also encourages RVers to extend their adventures well above and beyond the organized campground to solitary wild campsites that count only feathered and furred creatures as neighbors.

Airstream revealed the Rangeline this week at the annual “America’s Largest RV Show” in Hershey, Pennsylvania. An entry level Promaster camper feels a bit surprising for Airstream, which previously built only Mercedes Sprinter camper vans. The sunken-faced Ram kind of clashes with the marque’s carefully cultivated luxury aesthetic, and something like an Airstream-badged variant of the new Hymer Venture S seems more on-brand. But we suppose the temptation of putting the iconic Airstream name on an appealing, semi-affordable camper van was simply too big to pass up during the RV-crazed early 2020’s.

The Rangeline’s well-established European camper van floor plan, undoubtedly borrowed in this case from Airstream’s cousin Hymer, shines brightest in back where the two-panel fold-away bed clears out a large load area during the ride. Owners can stock camping equipment high, secure gear like bicycles or surfboards to the floor tie-down tracks, or even carry home lumber from Home Depot on weekends that knock camping fun aside for pressing home improvement. At night, the bed folds down and cuts across the width of the van to sleep two adults. Airstream also offers an optional pop-top with two additional berths.

The Rangeline’s middle is filled out by the usual pairing of passenger-side galley and driver-side wet bath, but with a twist — instead of carrying any LPG-plumbed appliances, all the equipment runs on a combination of electricity and vehicle gasoline. The 102-L fridge/freezer combo, portable induction cooktop and microwave draw power from the van’s robust electrical package with 270-Ah lithium battery, 2,000-W inverter and 200-W solar panel. Meanwhile, hot water at the faucets and heat around the living area are supplied by a hydronic heating and on-demand hot water system that taps into the Promaster’s gas tank for power.

The 2.8-kW generator also relies on gasoline directly from the vehicle, serving as a backup power source and a means for powering the air conditioner when boondocked away from hookups. Using the dual-touchscreen control system, campers can set the generator to auto-start, either when the battery runs low or to kick on the A/C when the outdoor temperature hits a certain high (useful if you leave a pet chilling in the van). 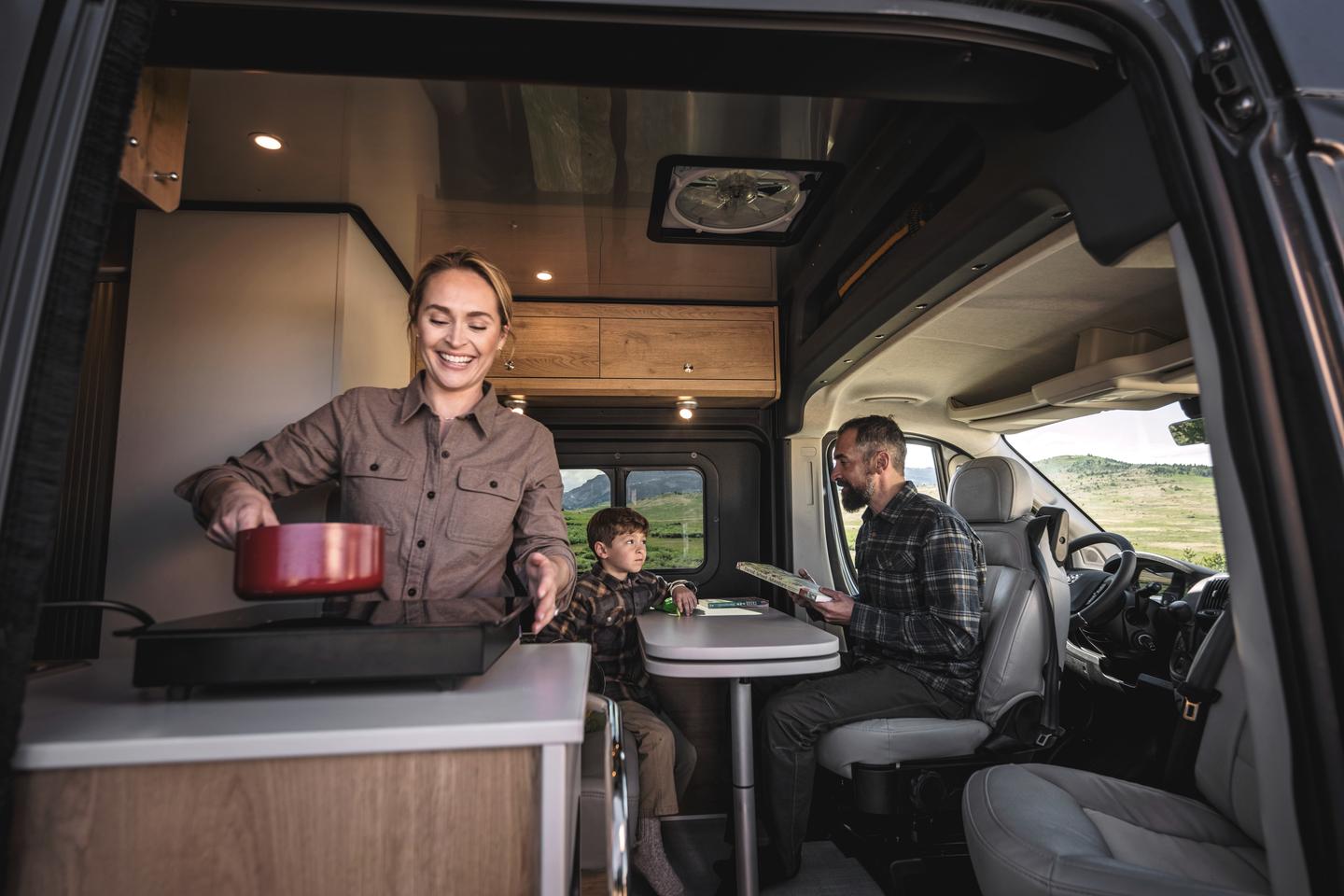 Airstream leaves the LPG tank at the hardware store, running appliances like the stowable induction cooktop off the 270-Ah lithium battery

The Rangeline’s front dinette includes a two-seat bench and two swivel cab seats positioned around an expandable and removable flex table optimized for both mealtime and remote work. A drawer with pull-out food/water bowl combo gives the dog(s) their own dedicated dining space, and an exterior leash tie-off makes it easier to free (but not too free) Max or Muffy after a long, cramped drive to camp. For those who don’t have pets, the dog bowl insert removes to free up a storage drawer, and the leash tie-off is just an out-of-the-way embellishment on the running board.

Other cool, convenient features include the JBL Bluetooth speaker that mounts like a paper towel roll over the kitchen block and easily removes for outdoor listening, the rear-door MOLLE panels delivering fast-access grab-and-go storage, the shoe cubby just inside the side door entry, the wireless dual-phone charging mount on the wall next to the bed, and the pull-out step that helps campers climb into bed. 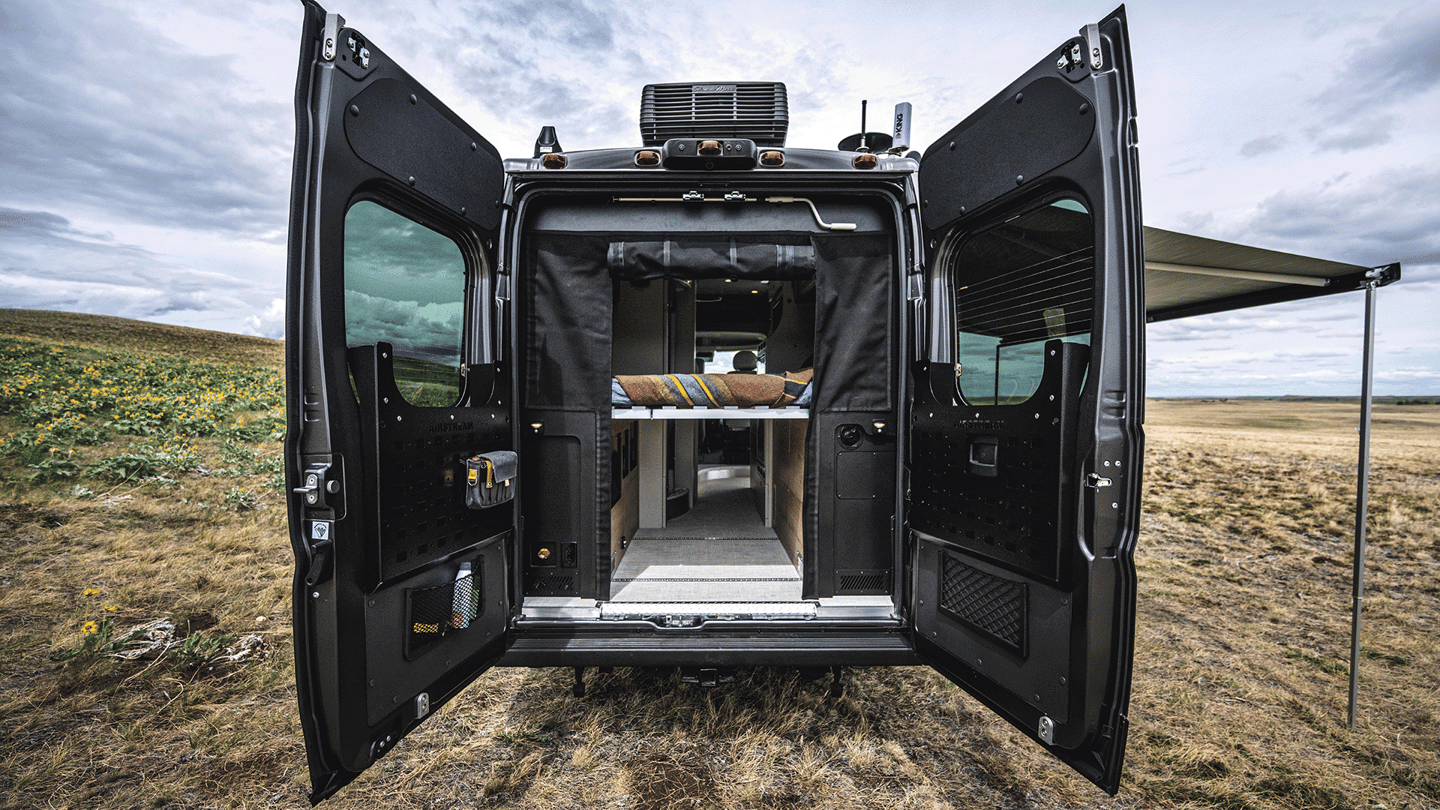 “We’re in a new travel reality, where freedom and flexibility are top of mind for more and more people,” Airstream president and CEO Bob Wheeler explained when announcing the Rangeline this week. “Rangeline is the result of extensive research and dedication to understanding the van life movement and what customers want from their experience. It’s a thoughtfully designed, highly capable multipurpose van that handles like a daily driver, and it’ll open a new world of Airstream adventures to one of the fastest growing segments in the RV industry. “

We’d wager that what those potential entry level customers really want is a van that’s versatile like the Rangeline but specced a la carte like a European camper van and priced at about half the Rangeline’s base. Many such European camper van products can be easily upgraded with key options like 4×4 while still pricing comfortably under $100K. And buyers can always personalize over time with their own Bluetooth speakers and MOLLE panels.

But that low-priced van isn’t coming from a high-end American brand like Airstream, anyway, and at least the Rangeline’s US$131,882 base price descends the staircase markedly from the $200K+ pricing across the remainder of the Airstream Class B and B+ van lineup. In fact, the Rangeline comes in roughly $11K higher than 1/2 the average price of Airstream’s other camper vans. 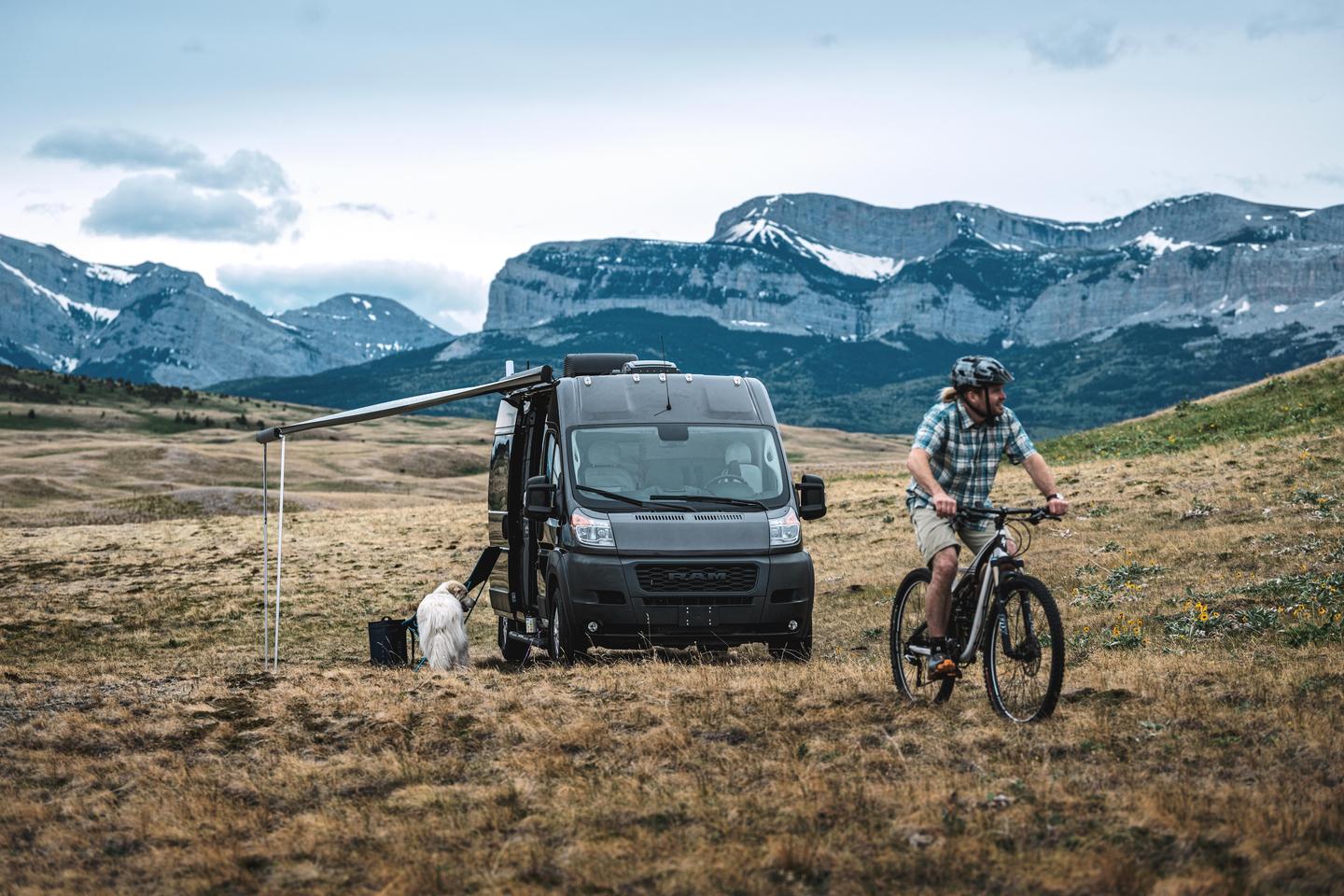 The Hymer-derived foldaway bed makes it easy to carry bikes, even without a separate rack or trailer

Airstream is clearly trying to find the most lucrative middle ground between true entry level American-market full-size van campers like the Pleasure-Way Tofino and Winnebago Solis Pocket and more expensive adventure vans like the Winnebago Revel and Storyteller Mode LT. We’re not sure if the $132K Rangeline is it, but it’s definitely a well thought-out attempt.

Airstream dealers are taking orders now and will begin receiving inventory in the coming weeks. The 251-in (638-cm)-long Rangeline comes standard with a 3.6-liter Pentastar V6 and nine-speed automatic that team for up to 280-hp and 260 lb-ft of torque. Packaged vehicular features include a 10.1-in Uconnect 5 infotainment display, 7-in color digital instrument panel, and driver assistance like active blind spot assist, active brake assist and rear-camera assist.

Unfortunately, unlike the Mercedes-Benz Sprinter and Ford Transit, the Ram Promaster does not have an AWD/4WD option so the Rangeline will remain front-wheel-drive only, even though it has the feel of an off-road/off-grid specialist. That lack of 4×4 does have the advantage of preventing the van from leaping up into a higher pricing tier. 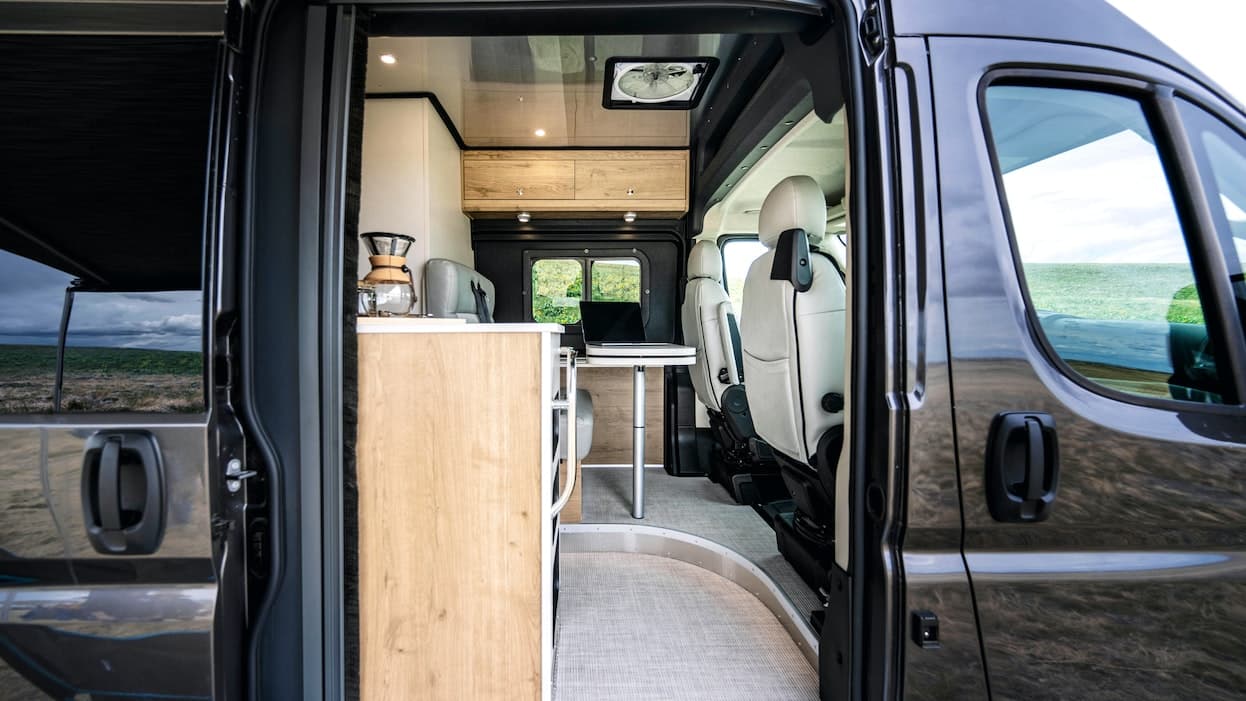 A new direction for Airstream, the Rangeline camper van launched at the Hershey motorhome show

We included the quick launch promo below, and those interested in really diving deep down into the Rangeline’s feature set can watch Airstream’s 40-minute full walkthrough. The latter gave us a new appreciation for just how much thought Airstream put into every cubic inch of the build, including little details like the exterior hookups concealed behind side trim strips and the side entry grab handle that doubles as a kitchen towel holder.