Penelope Dunswoody Smythe, proprietor in partnership of Cheshire Travel Advisors, advertises “advice,”https://www.travelweekly.com/Jamie-Biesiada/”guidance,”https://www.travelweekly.com/Jamie-Biesiada/”peace of mind” and “professional consultancy services” on her business card. Smythe is pictured on the card, sitting in a wooden chair with her legs crossed and looking, dare I say, like she’ll plan the hell out of your vacation.

It looks like many agents’ cards that I’ve seen over the years, but here’s the kicker: Smythe’s card is probably 100 years old.

It’s a fascinating piece in the history of the trade and proof that travel advisors have come full circle.

The history of the profession of travel advisors is, Burris admitted, “a little bit of an obsession of mine.” He’s pieced together a timeline using ASTA archives, travel companies’ histories and some other sources, like the history of cruise lines and, of course, his flea market find. 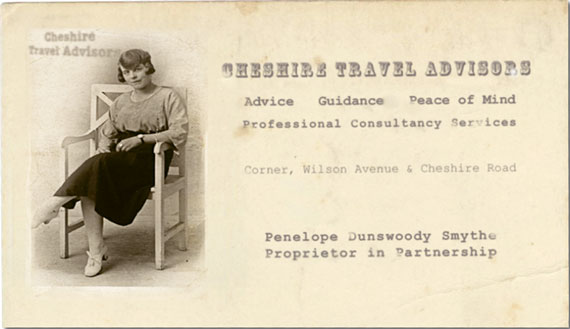 Travel advisorship began in 1841, he said, when Thomas Cook started selling rail tours in the U.K. They were essentially a tour operator, but they actually made most of their money selling a travel guide. The train ticket wasn’t where the money was. Instead, publishing expert advice fetched top dollar (well, 50 cents, in this case).

According to Burris, travel really got kicking in North America in the 1920s, and people started branding themselves as travel advisors, much as Smythe had done. All of their income came from charging for advice. Commissions had not yet been established, nor could advisors actually book travel.

1924 brought with it big change: Ask Mr. Foster opened the first modern travel agency, Burris said, also making its money based on advice. (The company opened several branches; at its height, under Carlson Cos. ownership, it had over 800 offices. Surviving Ask Mr. Foster agencies, following a series of mergers, acquisitions and name changes, can still be found under various names in agency behemoth Internova Travel Group.)

At that point, agencies had the ability to send telegrams to hotels and railroads to make bookings.

“A big part of their business strategy was not just booking, but having connections. ‘I know Luigi in Rome, he’ll take care of you’ — that sort of thing,” Burris said.

The then-new concept of suppliers paying a commission was seen as something that would destroy the industry. Advisors thought it would bias their advice.

Commission nonetheless became the dominant revenue stream for most agencies, likely by the 1950s, Burris said, and fees faded in prominence until the airline commission caps and cuts, beginning in the mid-1990s.

The Covid crisis has again turned many eyes to fee structures. It’s a good thing, too. History has taught us a supplier could, at any point, stop offering commissions. Airlines did it. Consider, too, cruise lines’ noncommissionable fee structures.

In many ways, fees have led to a more sustainable travel agency community.

With them, Burris said, “We’re a little more in charge of our own financial destiny. We have partnerships not based solely on who’s giving me the best override; it becomes more about who’s taking better care of my clients. That’s good for everybody: clients, travel advisors and suppliers.”