When fall dresses the Carolinas in fiery shades of red, orange, and gold, leaf peepers and vacationers unfettered by children’s school schedules descend upon North and South Carolina to make the most of the spectacular scenery and cooler temperatures. But all that fresh air and natural eye candy can work up a powerful appetite. Carolina food festivals to the rescue.

From September through November, the Carolinas come alive with joyful celebrations of nature’s bounty and human creativity, making it possible to feed the body and mind without taking your eyes off autumn’s glorious presentation.

This selection of festivals is a balanced representation of the many options available in North and South Carolina during the brief respite between the Southern summer swelter and the holidays.

For over 40 years, the mid-October NC Oyster Festival has been bringing together families, friends, and oyster lovers of all ages to celebrate the ocean’s bounty on the North Carolina coast. Produced by the Brunswick County Chamber of Commerce, this family-friendly festival has become an annual tradition for multiple generations of festival goers.

The $5 adult admission will get you into the Oyster Festival, where you’ll find live music, an impressive lineup of contests, children’s activities, area craft and food vendors, and oyster dishes galore.

The festival kicks off Friday evening with a live concert. Saturday features the annual oyster shucking contest, which promises to be a lively event. 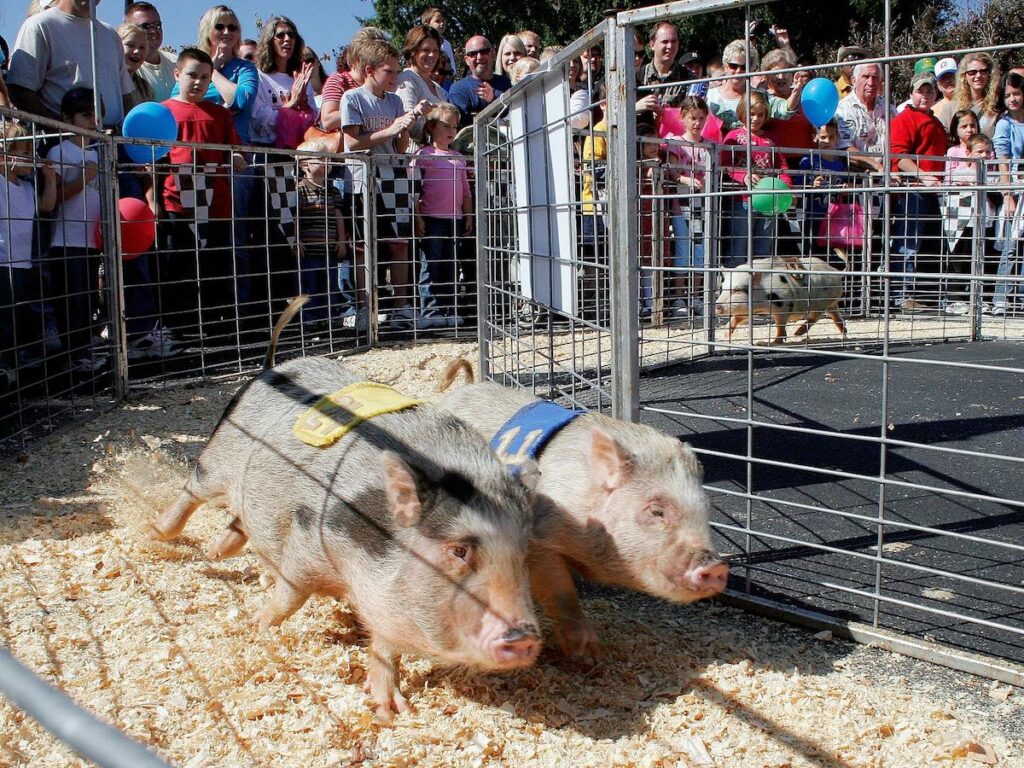 You can’t list food festivals in the Carolinas without including barbecue. And the annual Lexington Barbecue Festival, or simply The Barbecue Festival, is considered to be the premier event. The irresistible combination of extraordinary food and unending fun will leave you wanting to return next year.

In late October, this one-day barbecue festival attracts approximately 200,000 attendees to the festivities in Uptown Lexington. Since its inception in the mid-1980s, the festival has been recognized as one of Travel + Leisure’s Top 10 Food Festivals in America. The reason is obvious. It’s the famous Lexington-style Barbecue.

Admission is free, and there’s plenty to do between platefuls of barbecue while meandering the 10 Main Street blocks closed to traffic. Browse the antique car show and the Corvette display. Marvel at the “Chop Shop” Lumberjack Sports show. Get caught up in the live pig races and other forms of entertainment throughout the day. Let the kids play in the special section featuring rides and games, then reward yourself with a little sit-and-sip at the wine garden.

Lexington is located in the Piedmont, just 20 miles south of Winston-Salem at the intersection of US 29/70 and US 52.

Pro Tip: The Lexington Barbecue Festival is the one day each year when Amtrak’s Raleigh to Charlotte train stops at Lexington’s depot. 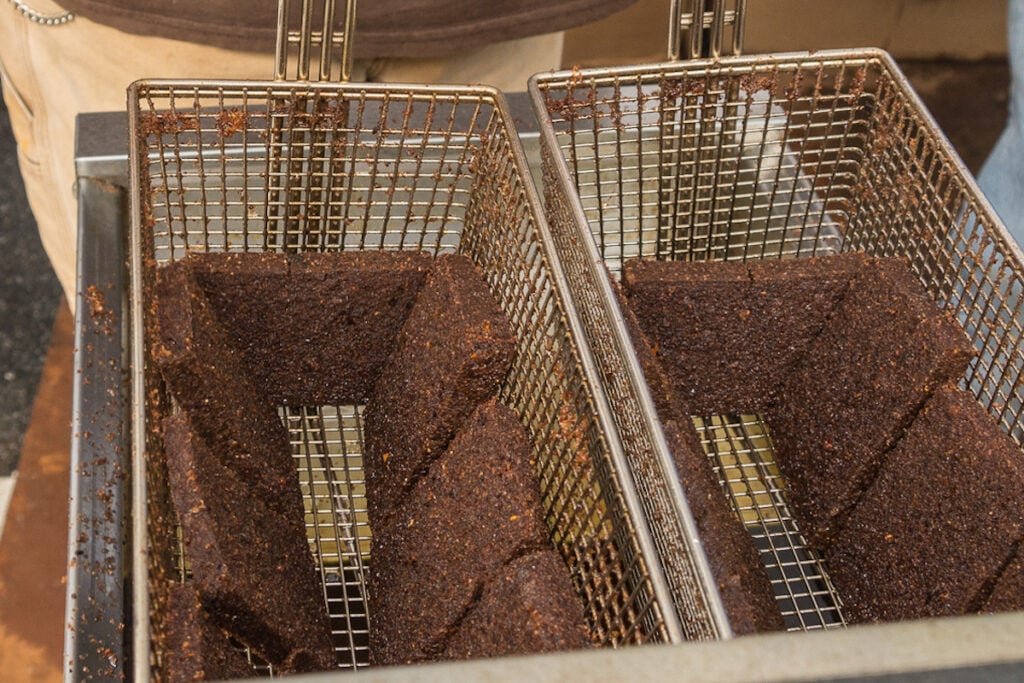 At the base of the Blue Ridge Mountains, 45 minutes West of Charlotte, the historic court square in Uptown Shelby plays host to the unmistakable sounds, smells, and tastes of Mush, Music & Mutts on the third Saturday in October. This one-day festival held annually in Shelby, the seat of Cleveland County, celebrates the unique regional delicacy called liver mush.

Liver mush is a combination of boiled pig’s head meat and ground-up pig’s liver and cornmeal, all seasoned with sage, black pepper, red pepper, and salt. Its seasoning is similar to sausage, but that’s where the similarity ends. Instead of links or patties, the concoction is pressed into a loaf for slicing. It’s fully cooked and ready to eat — but is best fried to a crunchy crispness. Liver mush has a subtle liver flavor that is not at all overwhelming, and if you choose the spicy variety, it’s hardly noticeable.

The traditional way to eat liver mush is deep fried, on a bun or white bread, and slathered with mayo, mustard, or grape jelly. It’s also scrumptious under spicy salsa or pimento cheese.

Festivalgoers can enjoy a variety of food and beverages, including freshly prepared liver mush sandwiches sold by local producers, a liver mush eating contest, and a recipe contest. Other events feature live music; craft, food, and beverage vendors; as well as an adorable Little Miss Liver Mush contest for cuties up to 6 years old. As for the mutts, a pet costume contest, parade, K9 demo, and trick shows keep the dog lovers happy.

Pro Tip: Admission is free, and you’re welcome to bring your pet. 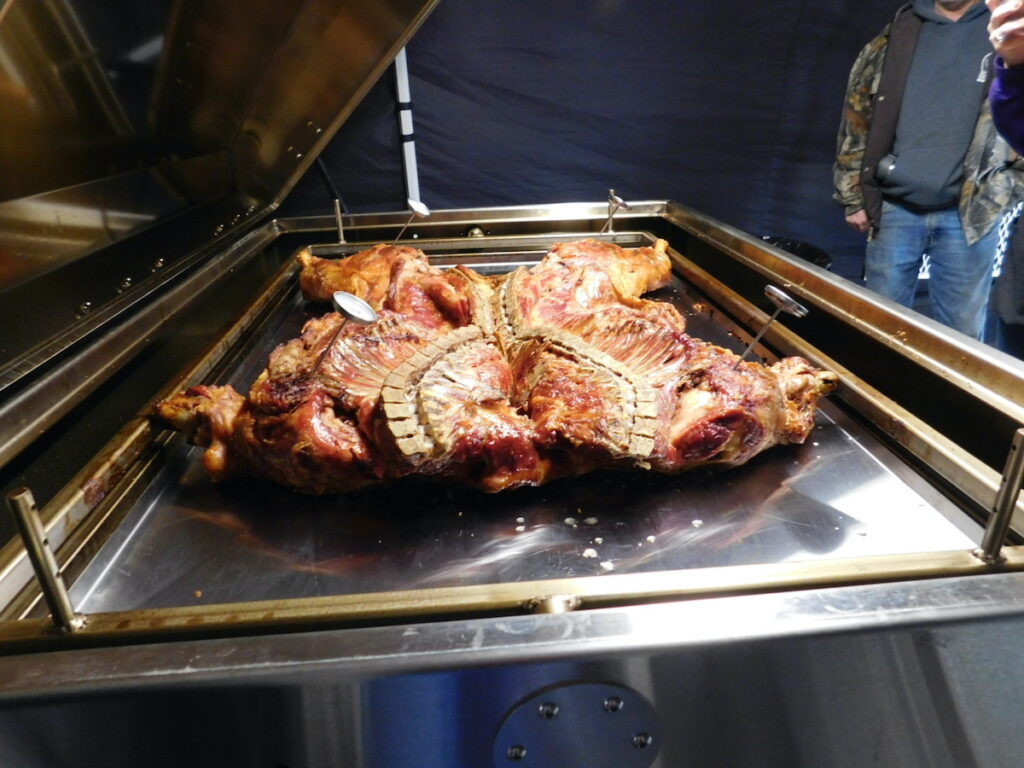 The winning pig at the Pork & Beats Festival in Elizabethtown, North Carolina

The 2-day Pork & Beats Festival, held the first weekend in November at the Cape Fear Farmers Market, celebrates the proud agricultural heritage of Elizabethtown and Bladen County. Located between Fayetteville and Wilmington, this area is home to Smithfield Foods, one of the largest pork processing plants in the United States.

Enjoy savory and sweet festival foods from local vendors as you listen to live music. Watch world-class pit masters vie for honors at the North Carolina Whole Hog Sanctioned BBQ Competition, then purchase a plateful of some of the best barbecue in the state as an extra-special treat. Proceeds go to local charities.

When you’re not chowing down on barbecue, meander through the festival site and visit vendors selling art, crafts, and other items. And on Sunday, don’t miss the opportunity to check out the Cape Fear Farmers Market before you leave for home. 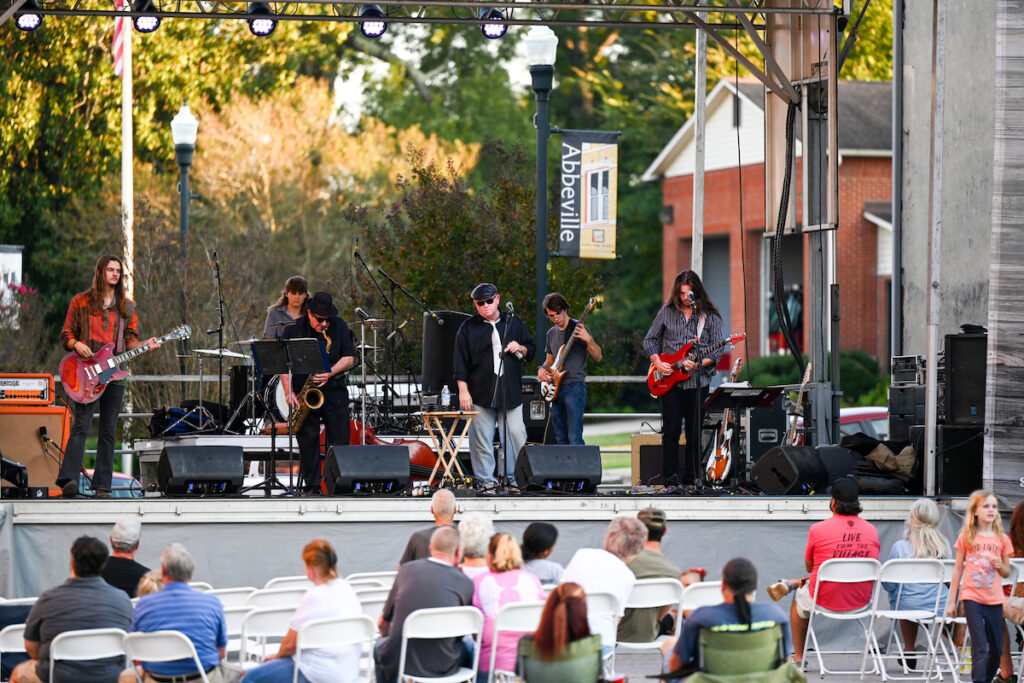 Since the first festival in 2013, Hogs & Hens has claimed the third weekend in October as its own, drawing thousands to the charming town of Abbeville. Or perhaps it’s simply the tantalizing aroma of slow-smoking barbecue from the pits that attracts visitors like an olfactory Pied Piper. Either way, barbecue-hungry festivalgoers are never disappointed.

For the competitive aspect of Hogs & Hens, Abbeville partners with The Southern Barbecue Network to ensure fair competition. The organization is comprised of experienced, certified judges who work with barbecue competitions throughout the Southeast.

Along with the barbecue, the festival features local craft vendors, live music, and the Mullet Pageant. Any mullet is eligible to participate. Mullet categories include manly mullets, kiddie mullets, femullets, and family mullets. Mullets must be registered. Prizes will be awarded. 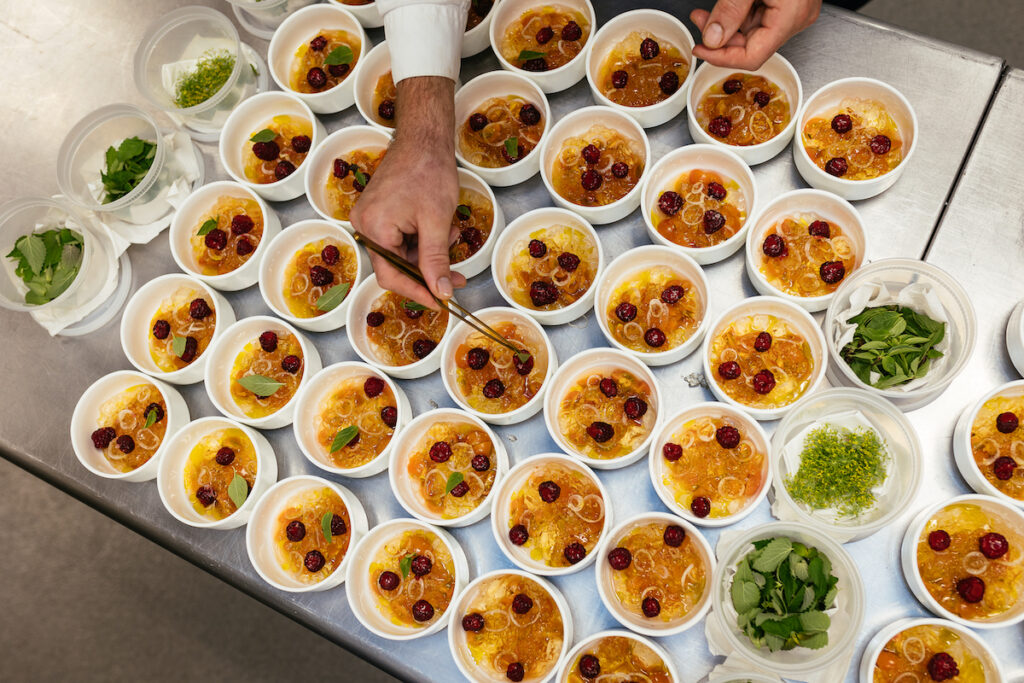 Prepping food for the Michelin Experience at euphoria

euphoria is an annual food, wine, and music festival that showcases the best of Greenville’s culinary scene, along with some of the most celebrated guest chefs in the United States. Unlike the above-mentioned free food festivals, euphoria is a 4-day culinary extravaganza featuring over 40 events, each charging a separate admission fee. This high-end festival has earned multiple James Beard nominations in recent years, and Greenville was named one of Food & Wine‘s Best Food Cities.

euphoria’s food and events are outstanding on their own, but the festival’s not-so-secret ingredient is the generous serving of support it generates for the local community. The non-profit celebration of Greenville’s vibrant food scene not only makes a substantial economic impact on the city, but proceeds from euphoria are distributed through annual grants to local charitable organizations.

Although euphoria 2022 has come and gone, its local impact continues through the end of the year via the $46,300+ in proceeds donated to charities from euphoria 2021. Once tallied, the proceeds from this year’s event will keep the euphoria effect going until 2023, which promises to be even more exciting and generous. 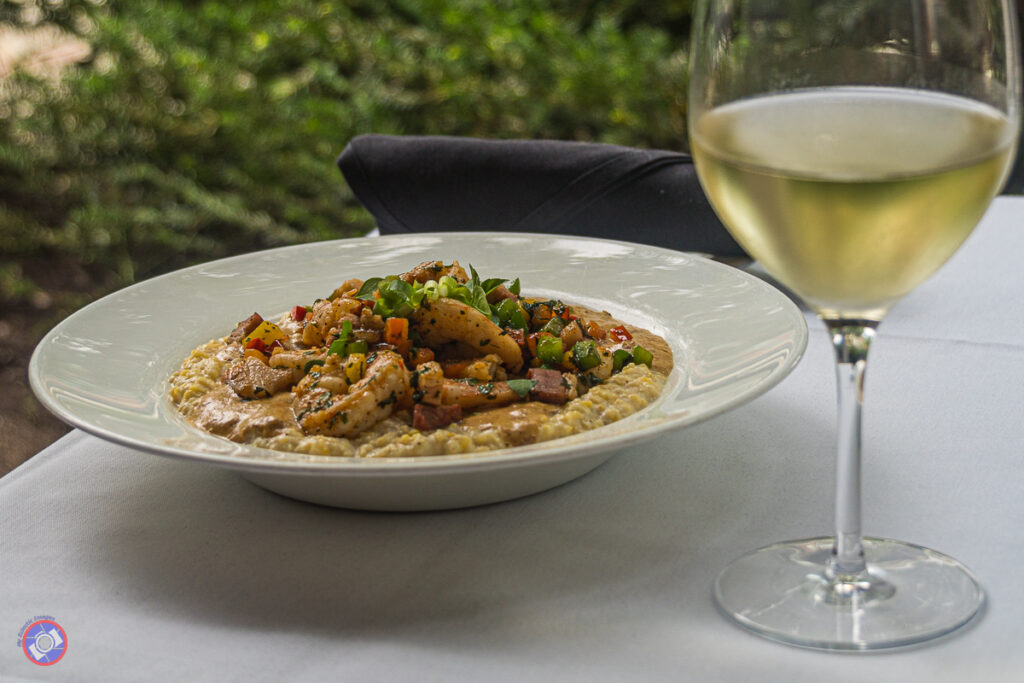 Greenville is a city obsessed with festivals. To a Greenvillean, a month without at least one festival would be like July without sweet tea. That is why Fall for Greenville is here before the euphoria has faded. Two months, two festivals, and two different ways to celebrate Greenville’s love affair with food.

Celebrated for 40 years and still growing, the 3-day Fall for Greenville festival brings together restaurateurs, brewers, distillers, and musicians to put on an unforgettable autumn event. With 50 restaurants, 250+ menu items, and a variety of locally produced libations, no one goes hungry.

Greenville’s tree-lined Main Street is transformed from a high-traffic thoroughfare into a pedestrian area with a party atmosphere. You can purchase sheets of 10 tickets and use them to sample some of the city’s best. Take your food and drink, wander over to one of the six stages for some musical accompaniment while you munch, and thank your lucky stars you’re at Fall for Greenville.

Pro Tip: Although autumnal brilliance can be savored throughout the Carolinas, the mountains of North Carolina are particularly busy during this time. Be sure to reserve your accommodations as early as possible to avoid disappointment.

If you need more information and inspiration for your trip to the Carolinas, consider: