The polar bear is outside my window. I’m standing on a ship’s stateroom balcony—my balcony. He stands below me on a slab of sea ice so vast it looks like land. He’s not close enough to touch, but he’s close enough for me to watch his every move with no need for binoculars. He saunters, drops to rub his broad shoulder on the ice, and then splendidly rolls right onto his back, paws up in the air. As my ship slows to stillness here in the middle of the Iceland Sea, somewhere very north of the Arctic Circle and hundreds of miles from land, this vulnerable creature rolls back up on four legs, turns his dark brown eyes and snout toward me, and uses his keenest sense—smell—to assess. We’re close enough, in other words, to suss each other out. He’s unconcerned. To prove it he drops down for another casual back roll, lolling like a sultan. Eventually he moves on. So, quietly, does my ship.

I could never have imagined an encounter like this with Ursus maritimus, much less steps from my bed, before making an Arctic voyage aboard Le Commandant Charcot, a revolutionary new ship launched in 2021 by French cruise company Ponant. But I chose this—and two more sea journeys—to peer ahead into cruising’s next great chapter after the crushing halt of the COVID-19 pandemic. I sought to explore new places, yes, but more so to explore how we might now see the world by ship differently. To look, as all sailors should, to the horizon.

Before I would meet my first polar bear though, I began small and in South America. Here is a new, compelling counter argument to the Galapagos being the only reason to set sail from Ecuador: Kontiki Expeditions’ M/Y Kontiki Wayra. The vision: a high-luxury, little expedition ship nimble enough to tuck into coves and nestle into ports on the coast of Manabí Province, where founder and longtime resident Carlos Núñez knew of natural, cultural, and historic treasures largely ignored by visitors jumping from Quito to the famed archipelago 600 miles offshore. 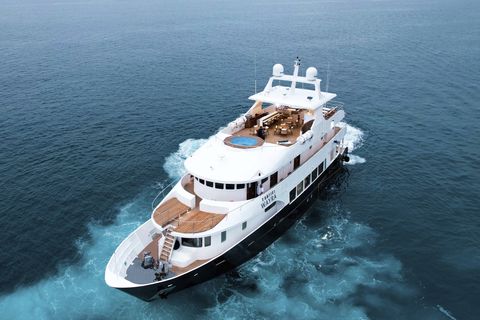 And why not make that ship a superyacht (generally bigger than 100 feet), Núñez thought. It’s a ship-meets-mission dream. The Wayra eschews the high-gloss luxury yacht aesthetic, trading out chrome, brass, and mahogany for local woods, natural fibers, and handmade local textiles. With rainfall showers and sea views, the 128-​foot-long ship’s nine staterooms (meaning a maximum of 18 guests ever) are cozy, tempting nests in which to linger. But Wayra journeys are expeditions, and every day offers an excursion of purpose—a thoughtful glimpse inland. 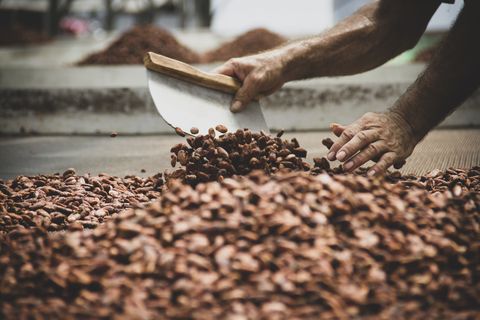 We hike narrow trails of offshore island preserves among waddling blue-footed boobies. We pick, roast, grind, and make rudimentary chocolate from cacao at a traditional farm tucked into the coastal hills. We linger over plates of ancestral foods brought forward into dazzling new style at a hybrid restaurant and culinary school overlooking the sea. We explore the ruins of the prehistoric Manteño culture of peerless seafarers. And we sit awed as one of Ecuador’s virtuosos of the toquilla straw hat demonstrates his weaving technique in his home workshop. And what a daily homecoming. We pull up in our bright blue Zodiacs to superyacht pleasures like a soak in the top deck’s tub or a run down Wayra’s three-story inflatable slide, then join our onboard guides in the window-wrapped lounge and dining room for long, chatty dinners and briefings on the next day’s adventure. We watch lights glimmer onshore as night falls and feel distinctly connected to this rich place, counting ourselves a lucky new generation of seafarers.

How to match a small ship, a new coast, a rich culture? Ice, ice, and more ice. This is the bracing promise of my second ship, this one named for Jean-Baptiste Charcot, France’s natty, mustached explorer/scientist of the early 20th century dubbed “the Gentleman of the Poles” by his peers. In the spirit of le commandant, this is a ship of inquiry, of yearning to spy the heretofore unseen and chart new paths. It’s a romance of globes spun in libraries, journals painstakingly scribed, and derring-do.

Our trappings are hardly Victorian. The 492-foot-long Charcot’s interiors— 123 staterooms and suites, plus two restaurants, a handful of lounges, and a Scandinavian-style spa—are serenely superb inner worlds of rich woods paired with blues, whites, and silver—the palette of the world out our windows. But it’s what lies belowdecks that fuels our purpose: a killer hull and brawny engineering. Charcot is a top-flight icebreaker—the first of its kind—which means that in the Arctic, where the seas between Greenland and northern Norway freeze into an ever-shifting, menacing jigsaw puzzle hundreds of miles in every direction, we can now carefully voyage powered by a cleaner hybrid of electricity and liquified natural gas (Charcot also inventively recycles and reuses many of its outputs). Also belowdecks is a purpose-built set of labs for serious research.

Charcot, as its namesake, is devoted not just to exploration but also to science. Teams join every voyage. Finally we have our guides—biologists, naturalists, bird and whale specialists, alpinists, paddling gurus—who deliver daily lectures in both French and English and lead us into the delicate, foreboding world of the Arctic. We don bright orange expedition parkas and “play,” as our captain likes to say, with the ice. We nudge into floes safe enough for us to disembark for hikes on the crunchy surface. We explore open waters by kayak and Zodiac, marking whales, sea birds, walruses. One bright sunny day we carve a path into the ice a mile offshore from northeast Greenland’s tiny Inuit outpost of Ittoqqortoormiit and head into the still-icebound town on dogsleds to pay a visit. And in true Gallic style, we eat and drink like kings, even on the ice, where the team pops up white-clothed tables stacked with Norwegian salmon and bottles of Veuve Clicquot. “To the ice,” we say, clinking our glasses. To the ice.

I am able to think about cruises and voyages and the worlds of water, finally and most penetratingly, because I leave shore for an entire week and touch nothing—not even a floe. I spend seven days at sea with only the achingly vast blue Atlantic around me and my 2,500 or so fellow passengers. I make a transatlantic crossing on the Queen Mary 2 (QM2). 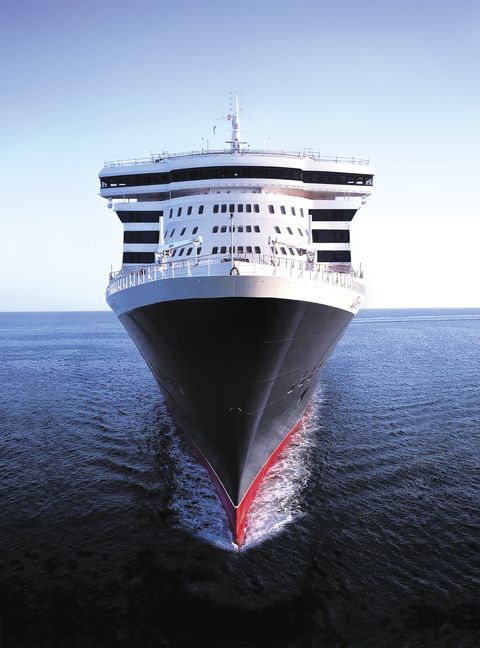 How could Cunard’s famed legacy of ocean-​crossing queens beginning with the iconic original Queen Mary in 1936–with her glittering manifest of the era’s most glamorous travelers—be a look forward? It’s because this crossing offers what perhaps no other journey can as well: access to one’s mind. To thinking. To time. Yes, the 1,132-foot-long QM2, with her 14 decks, 1,353 staterooms and suites, and opulent array of restaurants, bars, theaters, lounges, boutiques, pools, spa, book-filled library, and even a planetarium, can keep a passenger occupied. And from lectures to shows to the wildly popular daily trivia contests and delightful afternoon tea (this is British life after all), one can pencil in days full of activity. But to be frank that’s not the magic of the QM2. 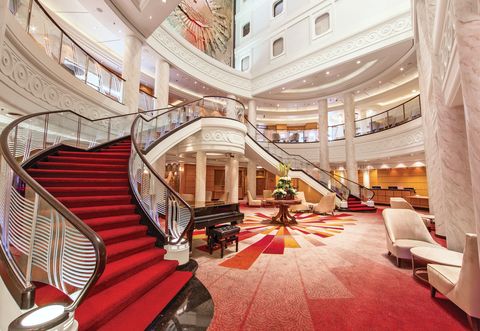 It’s what happens on her broad and beautiful promenade deck lined stem to stern with traditional teak loungers. Here is where so many of us stroll, slow, and perch—taking in the late summer air off the sea, watching clouds, playing cards, reading books. Talking. Laughing. Pondering. Life slows because the ocean makes it so. What is, at first, a bit vertiginous, waking to the same sea every morning, soon becomes a promise. No land today! More time today! The cries and cackle of gulls on our final morning as we tie up in Southampton along England’s southern coast are strangely foreign and disheartening sounds. Now, I think, I’m tied back to land. Now my cell phone chirps to life. Now my dreamy revels are ended. 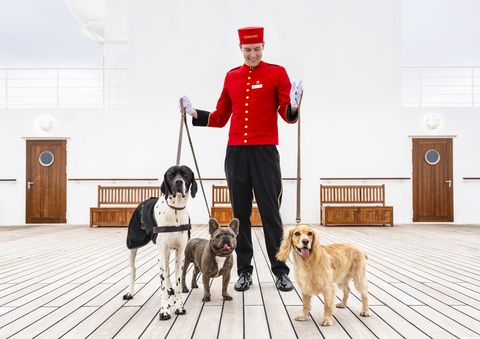 On one last walk around the promenade as we prepare to disembark, I think one more time about where these three journeys have led: to new shorelines, to distant worlds made of ice, and to the quieted hours of my mind. The ships stand ready, I realize. They always have. As we began so many eras of exploration, from the Manteño people of Ecuador to the polar explorers to those elegant journeyers of the 1930s taking the air mid-Atlantic in slow circles, we return to sea, again. And thrill at what lies ahead. 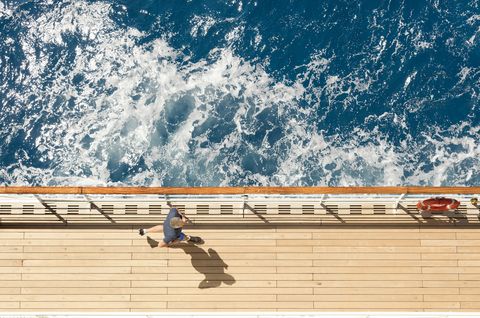 About These Luxury Cruises

Close encounters with wildlife and adventures like kayaking are served alongside Champagne—and a healthy measure of ice—aboard Ponant’s Le Commandant Charcot. The ship charts varying routes into the Arctic in the North American summer (including the Northwest Passage and the geographic North Pole) and navigates the frozen realms of Antarctica in the winter. Prices vary by itinerary; us.ponant.com

Opulent interiors, legendary service, and promenades with a view are on deck aboard the Queen Mary 2, which makes various east- and westbound transatlantic crossings throughout the year. Prices for Cunard’s seven-night New York-Southampton crossing start at $2,118 per person in a Britannia Inside stateroom; cunard.com